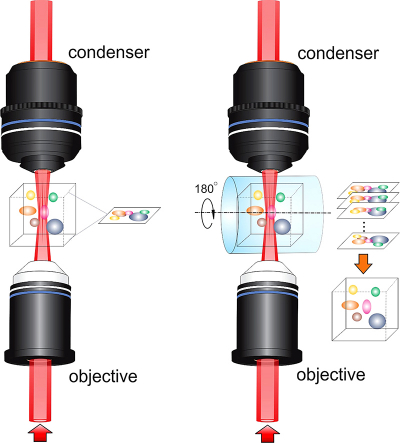 The technology uses a type of laser beam called a Bessel beam, which maintains focus for a longer distance than a traditional “Gaussian beam”, making it possible to penetrate deep into tissue. Stimulated Raman spectroscopy eliminates the need for fluorescent dyes.

Because the Bessel beam makes possible deep-tissue imaging, it could lead to systems that eliminate the need to draw blood for analyses such as drug testing and detection of biomarkers for non-invasive early diagnosis of diseases, Cheng said. “This is a long-term goal”, he said. “In the meantime, much more research is needed to improve the system.”

The researchers proved the concept by imaging fat storage in living cells. Findings are detailed in a research paper published in Nature Communications. The reported technology yields information about chemical composition, collecting a series of images while rotating the sample and reconstructing the 3-D structure through image reconstruction algorithms.

The Bessel beam is produced using a pair of cone-shaped “axicon” lenses and is combined with a microscope objective. Its use for volumetric fluorescence imaging was previously demonstrated by physicist Eric Betzig, who won the Nobel Prize in chemistry in 2014 for his pioneering contribution to super-resolution fluorescence microscopy. Super-resolution technology allows researchers to resolve structural features far smaller than the wavelength of visible light, sidestepping the “diffraction limit” that normally prevents imaging of features smaller than about 250 nm, which is large compared to certain biological molecules and structures in cells.

However, fluorescence microscopy usually requires the use of fluorescent tags, which may interfere with biological processes and hinder accuracy for determining chemical structure.

Future research will include work to increase the detection sensitivity of the system and improve the imaging quality and speed.

“There is plenty of room for improvement,” Cheng said. “The system is based on a bulky and relatively expensive femtosecond laser, which limits its potential for broad use and clinical translation. Nevertheless, we anticipate that this limitation can be circumvented through engineering innovations to reduce the cost and size of our technology. We also note that the Bessel beam can be produced using ﬁbres, which could simplify the system and enable endoscopic applications.”

I need this paper.