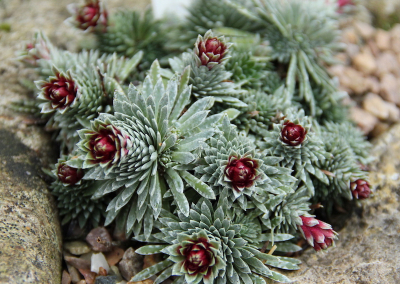 Scientists at Sainsbury Laboratory Cambridge University have found that the mineral vaterite, a polymorph of calcium carbonate, is a dominant component of the protective silvery-white crust that forms on the leaves of a number of alpine plants, which are part of the Garden’s national collection of European Saxifraga species.

The discovery of vaterite was made through a collaboration between SLCU and Cambridge University Botanic Garden as part of an ongoing research project that is probing the inner workings of plants in the Garden using new microscopy techniques, including Raman spectroscopy. Dr Raymond Wightman, the Microscopy Core Facility Manager at SLCU’s microscopy facility, has a Renishaw inVia™ Raman microscope which is used for studying aspects of plant development and plant cell biology. This is integrated with a confocal laser scanning microscope (CLSM), allowing correlated Raman and fluorescence measurements. Dr Wightman is also investigating correlative FLIM-confocal-Raman microscopy for observing protein–protein interactions, 3D cellular organisation and distribution of molecular species. 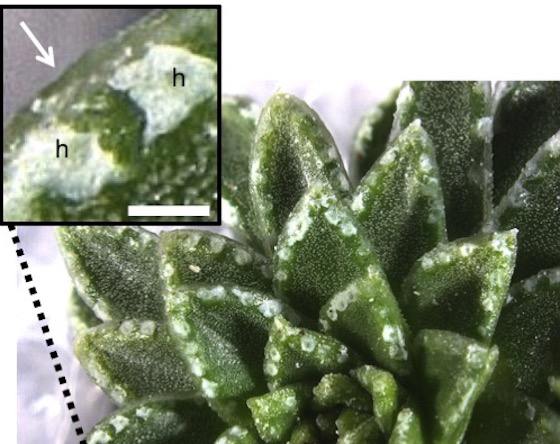 The chalk glands (hydathodes, h) on the leaf margins of Saxifraga alpine plant species have been found to produce the rare mineral vaterite. Image courtesy of Paul Aston.

Vaterite was found to be a dominant component of the protective silvery-white crust of the plants. Dr Wightman said: “In this case, the inVia microscope not only identified signatures corresponding to calcium carbonate as forming the crust, but was also able to differentiate between the calcite and vaterite forms when it was present as a mixture while still attached to the leaf surface.”

The research findings have been published in Flora.