Full-Text PDF
Old burned bones tell us about past cultures

Bone is a composite biomaterial mainly comprised of packed collagen fibres and an inorganic matrix of crystalline hydroxyapatite [Ca10(PO4)6OHx, Hap], the hydroxyl and phosphate groups being partly substituted by carbonate. Bone mineral characteristics, such as crystallinity and carbonate/phosphate content vary as a function of age, sex, location in the skeleton, diet and pathological state of the person. With increasing burning temperature (> 200 °C), the bone matrix suffers structural and dimensional variations, usually leading to higher crystallinity. These are reflected in the vibrational spectra and a combination of inelastic neutron scattering (INS), infrared and micro-Raman spectroscopies was used by the authors for the investigation of human bones burned under controlled conditions.1 This has enabled definitive conclusions about the temperature at which the bone was burned to be made. INS is particularly well-suited for studying hydrogenous compounds.2 The neutron scattering cross-section (σ) of an atom is characteristic of that atom and independent of the chemical environment. Since the value for hydrogen (σ = 80 barns) far exceeds that of all other atoms (typically σ ~ 5 barns), the modes with significant hydrogen displacement dominate the spectra.

Burned bones are often found in archaeological sites as a result of fire or funerary practices and are often the only preserved human remains. The specimens currently under study (both human and faunal) were found at different archaeological sites in Italy, from the Neolithic, the copper age, Roman period and the Middle Ages (Figure 1). Interpretation of the diagenetic alterations in the analysed samples was based on vibrational spectroscopic results previously1 gathered for modern human bones burned at well-defined temperatures (400–1000 °C). Hydroxyapatite’s hydroxyl libration (OHlib,) at ~ 630 cm–1 in particular, was found to be a very useful diagnostic signal of the burning process, as it was found to undergo a clear shift to lower energy with increasing burning temperature. Comparison between these data and that measured for the archaeological samples has yielded valuable information on ancient practices and customs. 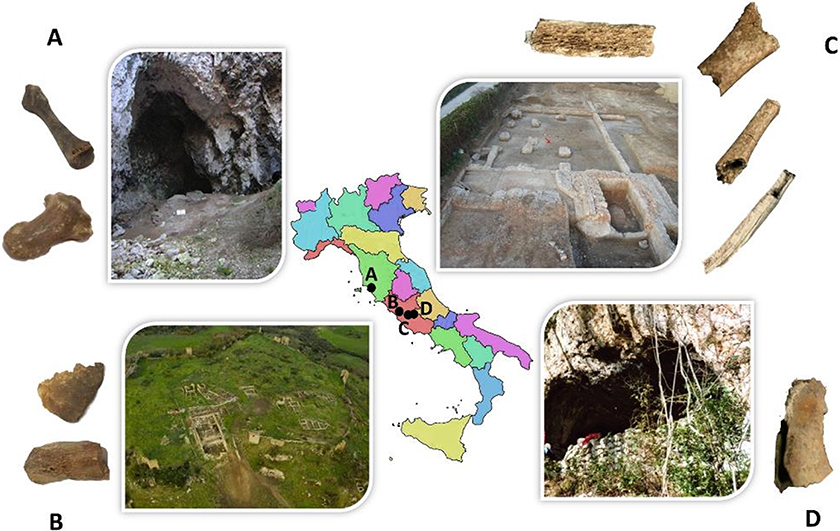 Figure 2 shows the INS spectra of human bones, from the same skeleton, discovered in tomb 36 at the Guidonia-Montecelio Roman archaeological site (Figure 1C). The skeleton was found intact, incorporated in a clay matrix and placed supine with the arms along the pelvis. Surprisingly, different types of bone from the same skeleton displayed very different INS profiles, consistent with diverse heating conditions from below 400 °C up to 500 °C or 800–900 °C. This can be explained by ancient funerary practices that involved burning the corpse inside the grave. Correlating the heating conditions with the type of bone, it can be seen that the temperature progressively increases for the ulna, femur, humerus and fibula which indicates that the body may have been folded in a foetal position. In addition, for some of these samples a band at ca 900 cm–1, ascribed to ν(HCO3–), was detected (mainly for the fibula), showing contamination from the soil which has a limestone composition in the Guidonia-Montecelio region (since the samples were found unwrapped inside the earth tomb). The major factors prone to influence the degree of combustion of the skeletal remains, and, therefore, the effect on bone composition and crystallinity, are the temperature, the heating time and the environmental conditions (e.g. presence or absence of oxygen). The spectroscopic data depicted in Figure 2 show that the lower area of the skeleton reached higher temperatures than the upper part. Coupled with the discovery of lamp fragments by the feet of the body, it suggests that the burning occurred in situ and that the lamp had an active role in this ritual funerary practice. 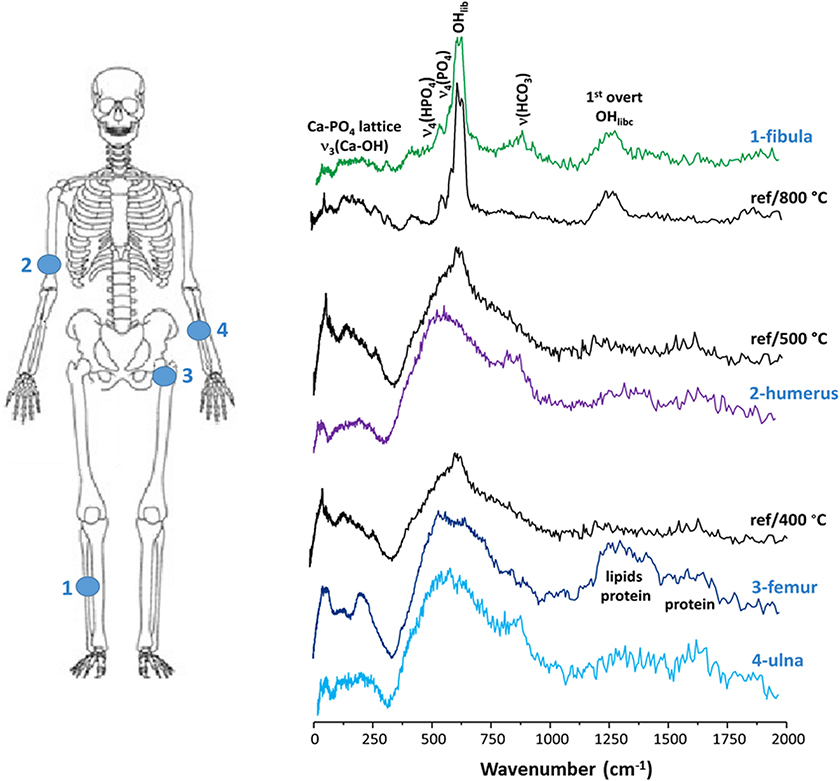 The infrared and INS spectra of human hand distal phalanx (PFF12) and metacarpal bone (PFF27) from the copper age, found at the Scoglietto cave, a 40 m deep cave located in the Parco Naturale della Maremma near Grosseto (Tuscany, Italy) (Figure 1A) are shown in Figure 3. The FTIR-ATR results show that these samples were subject to heating at temperatures no higher than 450–500 °C. They display the typical infrared features of bone still containing traces of protein (collagen I), mainly evidenced by the amide I band (Figure 3A). The INS data goes further in identifying some lipid components through the corresponding δ(CH2) and ν(CH) signals at ca 1450 cm–1 and 3000 cm–1, respectively (Figure 3B). Upon comparison with the data obtained for reference samples heated at defined temperatures, both spectroscopic signatures correspond to a burning temperature around 500 °C, virtually homogeneous for the three ancient skeletal remains. This temperature is compatible with an incomplete cremation in home fires. 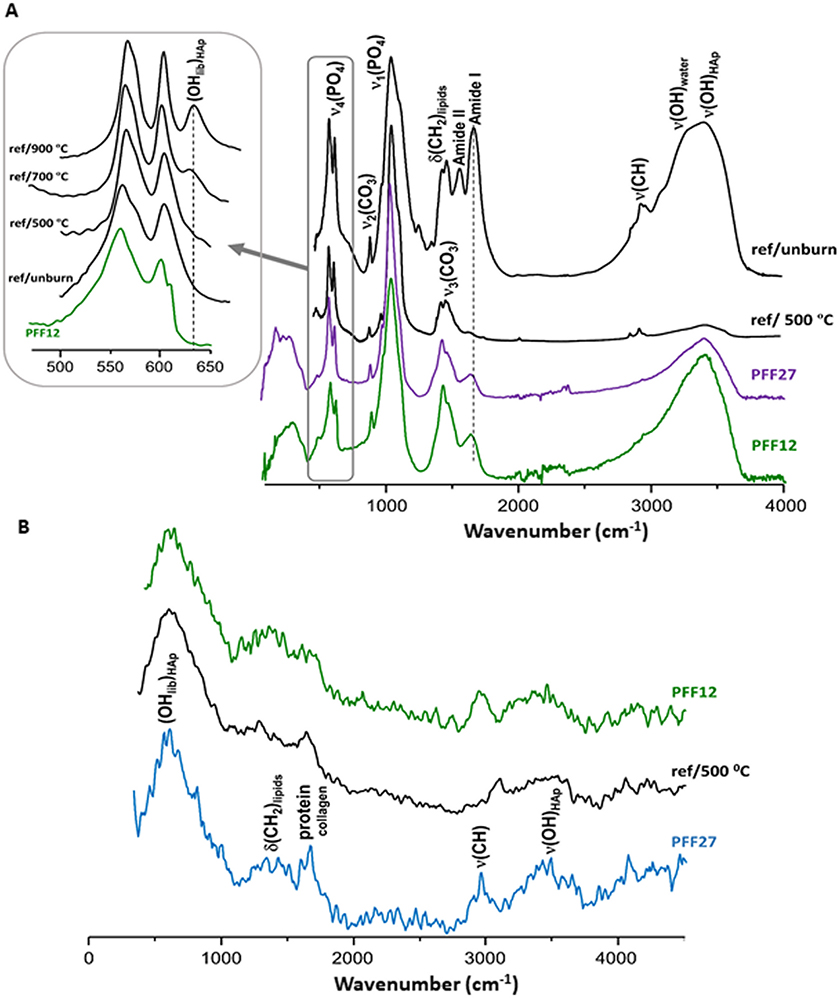 Figure 3. Vibrational spectra of human bones from the copper age (Scoglietto cave, Italy). Comparison with modern human bone samples burned at 500 °C. A, ATR-FTIR; B, INS. (The inset in Figure 3A depicts the temperature-dependence of the spectral profile in the 500–650 cm–1 interval).

Raman micro-spectroscopy measurements performed on these ancient samples provided clear evidence of the presence of gypsum (CaSO4.2H2O), through the distinguishing band from the sulphate symmetric stretching [ν1(SO4)] at 1008 cm–1 and the ν2(SO4), ν4(SO4) and ν3(SO4) signals at 415/493, 670 and 1136 cm–1, respectively. This constituent is indicative of contamination from the soil surrounding the skeletal remains, as this archaeological area is characterised by a cavernous limestone geology with a high gypsum content.

Figure 4 shows the FTIR-ATR and INS experimental data measured for human skeletal remains found at the Leopoli-Cencelle medieval archaeological site (Figure 1B)—fragments from tibia (US1241) and skull (US1043)—as well as a reference sample from modern bones. Cencelle was considered to be a farm because of the presence of estates that specialised in supplying timber to the alum-based industries. The infrared results clearly demonstrate that the medieval samples were subject to heating, although this may have occurred at a later time. Comparison with the infrared spectrum of an intact (modern) human bone showed no evidence of lipids [absence of the δ(CH2) and ν(CH) signals at 1340–1460 cm–1 and 2900–3000 cm–1, respectively] and hardly any traces of protein [which would be evidenced by the amide I/II and ν(CH2)collagen bands at 1570, 1665 and 2970 cm–1] (Figure 4A). Additionally, the presence of traces of fluorapatite [calcium fluorophosphate, Ca5(PO4)3F, generally known as francolite] was revealed in these samples, through the characteristic ν3(PO43–) feature appearing as a shoulder at 1090 cm–1 on the very strong signal of the ν1(PO43–) band at 960 cm–1. 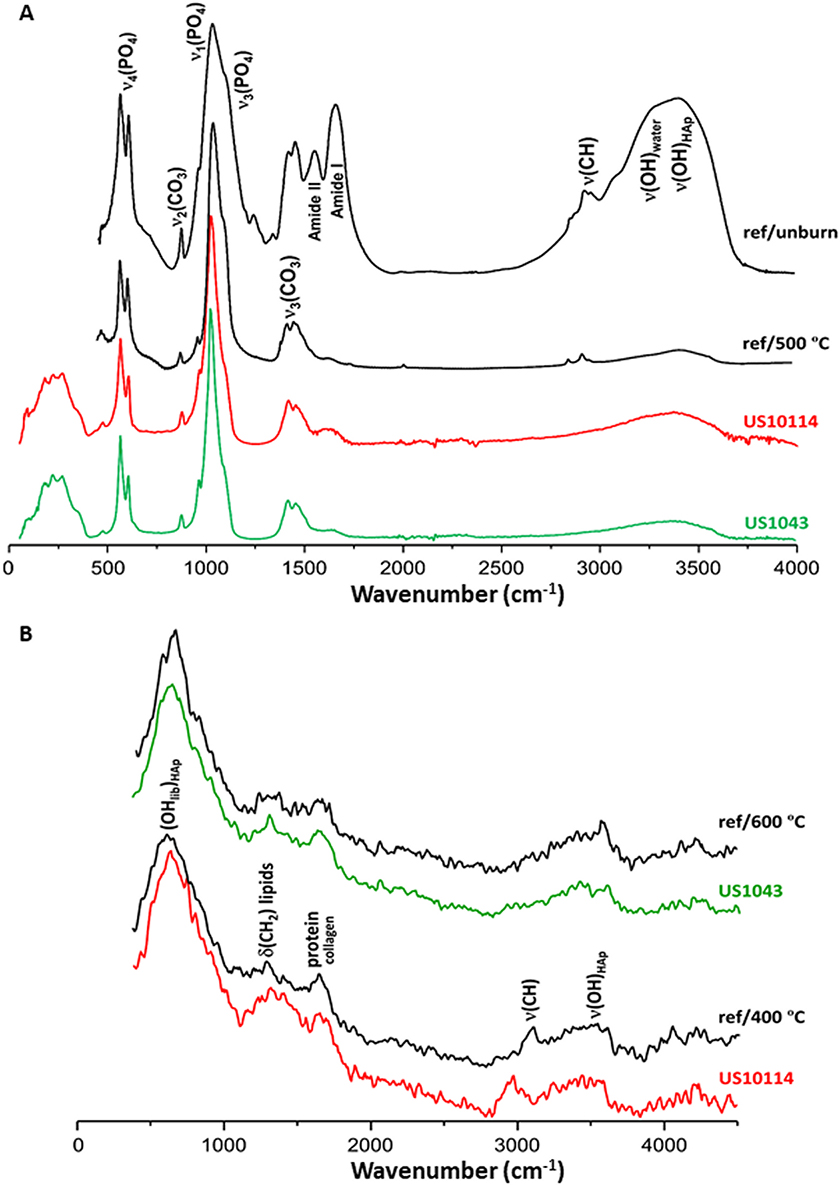 Regarding the INS results, a remarkable similarity was observed between the profiles of the modern and ancient samples (Figure 4B). The presence of small amounts of lipids and proteins is clearly seen, evidencing a higher sensitivity of the technique relative to infrared spectroscopy for this kind of H-containing constituents. The vibrational profile of the skull fragment (US1043) was found to be comparable to the reference bone burned at 600 °C, while that of the tibia (US10114) was identical to the 400 °C reference. It should be emphasised that these two archaeological samples could only be discriminated through neutron techniques, as the small chemical differences between them were not clearly revealed by infrared spectroscopy. While the FTIR-ATR fingerprint of the medieval bones provided only an average temperature range to which the bones were exposed, INS yielded a precise burning temperature for each analysed sample, being able to differentiate between 400 °C (for the tibia) and 600 °C (for the skull). These archaeological bones were probably subject to a char process with a concomitant crystallinity increase and almost total loss of the organic constituents: the lipids having been completely destroyed above 400 °C, while some collagen is still present within the bone matrix. Additionally, the detection of francolite revealed the occurrence of fluoride in the bone matrix, probably due to environmental contamination from either the neighbouring soil or water.

In order to assess the usefulness of this methodology and to extend its capabilities beyond human skeletal remains, Neolithic faunal bones from the Mora Cavorso archaeological site (Figure 1D) were also investigated. By analysis of the most informative vibrational bands (from phosphate, carbonate and bone’s organic components), the archaeological remains appear to have been exposed to temperatures below 500 °C, which is compatible with the temperatures reached in hearths used in Neolithic settlements for cooking. However, care should be taken when interpreting these data, since it was found that human and faunal bones display different reactions to heat, especially at higher temperatures.

This study (see Notice below) constitutes the first application of neutron spectroscopy to archaeological skeletal remains and will allow archaeologists/anthropologists to gather relevant information on ancient civilisations regarding the locations, and funerary, burial or cooking practices. Future research will enlarge the number of samples and archaeological sites in order to gather data on a wider range of contexts—geographical, historical and anthropological. Further spectroscopic biomarkers will then be identified, enabling a precise statistical analysis of the results linking particular spectral signatures to specific burning scenarios and environmental settings.