The first part of this article appeared in Spectroscopy Europe 19/1.

Air quality and its implications for human health is an issue that affects us all on a daily basis. In towns and cities in situ instruments are used to monitor air quality. However, to understand the atmospheric chemistry in one region and produce air-quality forecasts requires a more global approach. The transport of air around the globe means that even pristine regions with little human activity can be affected. For each chemical species the extent to which it is transported will depend on atmospheric lifetime (i.e. before it is destroyed chemically or by other mechanisms such as photolysis or thermolysis, which may be a function of altitude) and the nature of atmospheric circulation in the region of its source. Global measurements by satellite instruments are the only practical way of capturing this information and therefore spectroscopic data is required on each of the relevant chemical species, often at the full range of atmospheric temperatures and pressures.

The Michelson interferometer for passive atmospheric sounding (MIPAS)16 is on board the European Space Agency’s Envisat satellite launched in March 2002. MIPAS operates in the mid-infrared part of the spectrum and is able to resolve individual atmospheric vibration–rotation emission and absorption lines (with maximum spectral resolution of 0.025 cm–1). MIPAS views the limb of the Earth’s atmosphere as it traverses a polar orbit about 800 km above the Earth’s surface. Complex retrieval algorithms are used to derive altitude-resolved information about atmospheric trace gas species from the observed emission spectra. By virtue of its broad spectral coverage and high resolution, MIPAS is able to differentiate and measure many different atmospheric trace gas species. Many of these species have been well characterised in the laboratory, but there remain some atmospherically important molecules for which there is insufficient reference data or the uncertainties in existing data are large.

Peroxyacetyl nitrate (PAN) is an obnoxious species that even at very low concentrations can cause respiratory, skin and eye irritations (and possibly cancer) in humans and extensive damage to vegetation. PAN is a secondary pollutant, it is not produced directly by human activity but is formed from unburnt hydrocarbons through chemical reactions in the atmosphere. It is often associated with photochemical smog episodes, of the type seen in the World’s larger cities. In the atmosphere PAN is important because it acts as a reservoir for the active nitrogen compound NO2, which is implicated in the production of surface-level ozone. In the warmer lower troposphere the lifetime of PAN is limited to hours due to thermolysis, which readily occurs above 273 K, but at higher and colder altitudes PAN can exist for periods of months. At these higher altitudes PAN may be transported over large distances, effectively moving NO2 from polluted to pristine regions.

Previous laboratory measurements of PAN17–20 were made at spectral resolutions in the range 5–0.06 cm–1, and in some of the work there appeared to be uncertainty surrounding the purity of the sample leading to spectral contamination. Making accurate spectroscopic measurements on any reactive species is fraught with all kinds of difficulties. From a safety viewpoint PAN is an unpleasant substance which highly unstable, requiring very delicate handling when in large concentrations. Its instability also limits the certainty with which one can make accurate quantitative measurements. Samples must be made immediately before measurements and kept at low temperatures to avoid thermal decomposition. Despite these difficulties the University of Leicester and the Molecular Spectroscopy Facility (MSF) successfully produced a set of infrared absorption cross-sections and associated uncertainties for a range of atmospheric temperatures21,22 at up to 0.025 cm–1 resolution. Example PAN absorption cross-sections at 250, 273 and 295 K are shown in Figure 8. 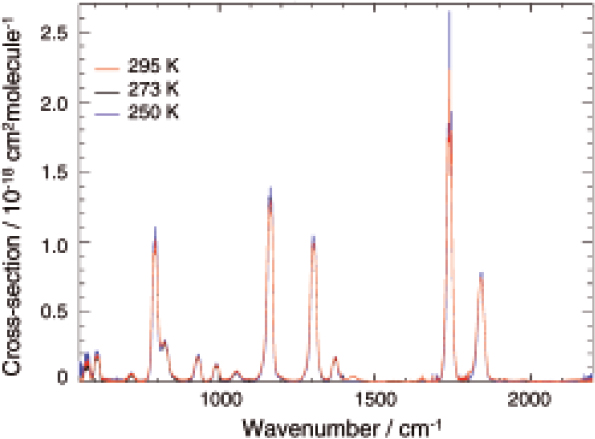 Figure 8. Mid-infrared PAN absorption cross-sections recorded at the MSF at temperatures of 250, 273 and 295 K.

Atmospheric PAN concentrations are not included in the MIPAS operational data products. Therefore the University of Leicester began an investigation to determine whether useful information on PAN could be obtained from MIPAS data using the MSF absorption cross-sections. The band around 790 cm–1 was chosen and MIPAS measurements from various geographical regions were studied. The initial results are very encouraging with a minimum detection limit of around 60 pptv in the 9–15 km altitude range, corresponding to northern hemisphere background concentrations. In regions downstream of pollution sources elevated concentrations were observed. A prime example being over the East China Sea where air has been transported from mainland China into what should otherwise be a pristine region. Figures 9 and 10 show observed MIPAS radiances and retrieved atmospheric PAN concentrations, respectively.

The study of planetary atmospheres is not within the NERC scientific research remit, however, there is a growing body of opinion that planetary and Earth sciences can benefit from each other. For this reason during 2006 the MSF returned to making measurements under conditions alien to our own atmosphere. In this case the subject under investigation was not even a planet in its own right, but a moon of Saturn. However, when you consider that Titan is larger than Mercury and has probably the most Earth-like atmosphere of any other planet in the solar system the rationale for studying its atmosphere becomes clear. Titan is interesting because of the composition and complex photochemistry of its atmosphere, which consists mainly of nitrogen with trace amounts of hydrocarbon. Titan has a surface pressure of 1.5 bar, not dissimilar from the Earth, and the photochemistry may resemble primordial conditions on Earth. In fact Titan has been described as a pre-biotic Earth, and therefore the behaviour of its atmosphere is of interest to climatologists.

Recently, Titan has been observed by the spacecraft Cassini orbiting Saturn and the Huygens probe, which was launched from Cassini and descended to the surface of Titan. These missions have shown signs of Earth-like geology and meteorology, in the form of clouds and liquid erosion, suggesting there may be processes occurring similar to the hydrological cycle on Earth. The main infrared absorbing gas in Titan’s atmosphere is methane, which is present at concentrations close to saturation. Instruments like the Visible and Infrared Mapping Spectrometer (VIMS) on Cassini remotely sense emitted and reflected (solar) radiation from the atmosphere and the surface. At wavelengths less than one micron, methane is weakly absorbing, however, the large concentrations present in Titan’s atmosphere allow remote sensing measurements at these wavelengths. Current laboratory reference data are based on measurements made at room temperature during the 1970s as well as later measurements made at approximately 77 K using intra-cavity laser spectroscopy techniques.23 These somewhat limited measurements have shown that the spectrum is extremely complex, especially in terms of temperature dependence. The best available cross-sections have been derived from the spectra of the outer planets and Titan24 and band strengths taken from laboratory studies. 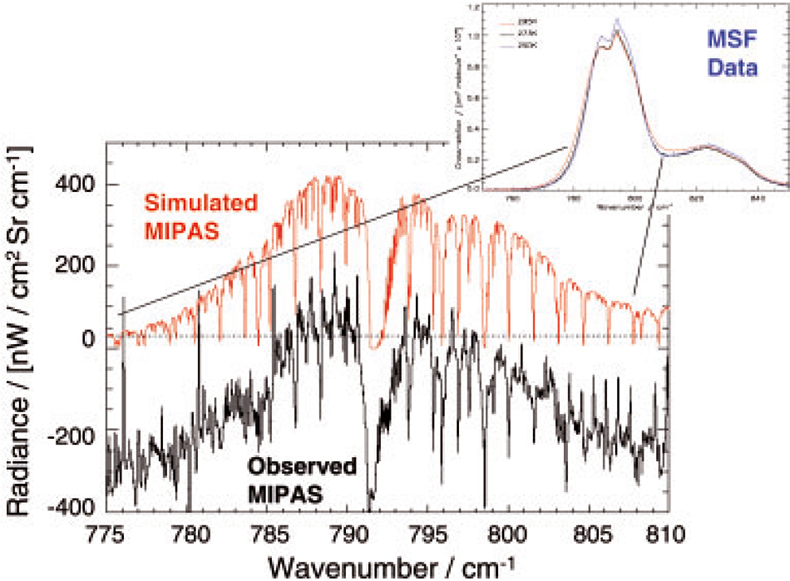 Figure 9. The red and black curves in the main panel show simulated and observed MIPAS radiances between 775  cm–1 and 810 cm–1 corresponding to an atmospheric PAN concentration of 490 pptv. The calculation of the simulated radiances include PAN cross-sections recorded at the MSF, shown in the inset panel top right, in addition to other atmospheric trace gas species taken from the HITRAN database. The envelope of the PAN spectral feature centred near 790 cm–1 is clearly present in the MIPAS observation. This figure is reproduced courtesy of the University of Leicester. 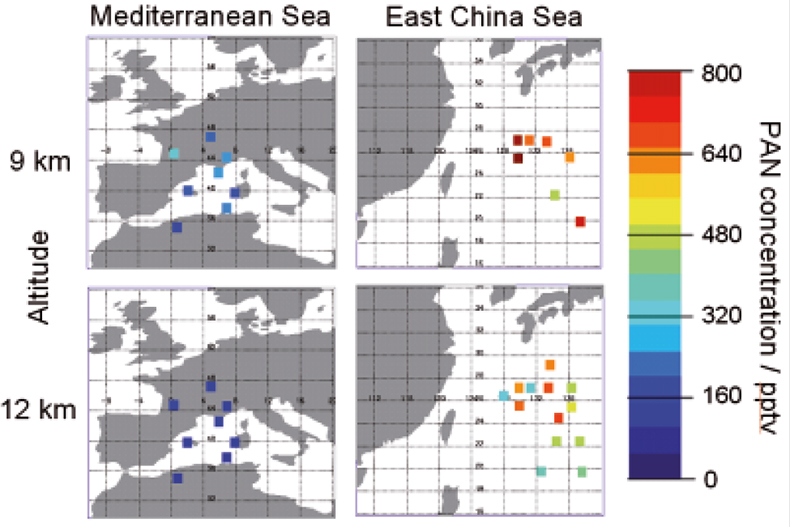 In order to take full advantage of the data measured by Cassini and Huygens the University of Oxford set out to obtain low-temperature high-resolution spectra of methane. Their aim was to measure a definitive set of spectral parameters at wavelengths below two microns. A series of new laboratory measurements were made at the MSF under conditions similar to (and exceeding) those found in Titan’s atmosphere; at a range of temperatures down to 150 K and pressures up to 5 bar. This required a considerable amount of planning to ensure a safe working environment and to make sure that equipment normally used to less harsh conditions was operating within specification.

Example transmittance spectra recorded at the MSF are shown in Figure 11. These were recorded over a 14.4 m optical path length using a multi-pass gas cell. The temperature stability and uniformity throughout this work was within ±1 K. Work is now in progress to analyse this initial dataset to produce cross-sections and eventually to derive line parameters and band assignments. Much experience was gained during these measurements and currently work is in progress at the MSF to rebuild the multi-pass gas cell specifically for low and high-temperature work between 100 K and 450 K. Further low-temperature methane measurements are planned to extend the dataset further. 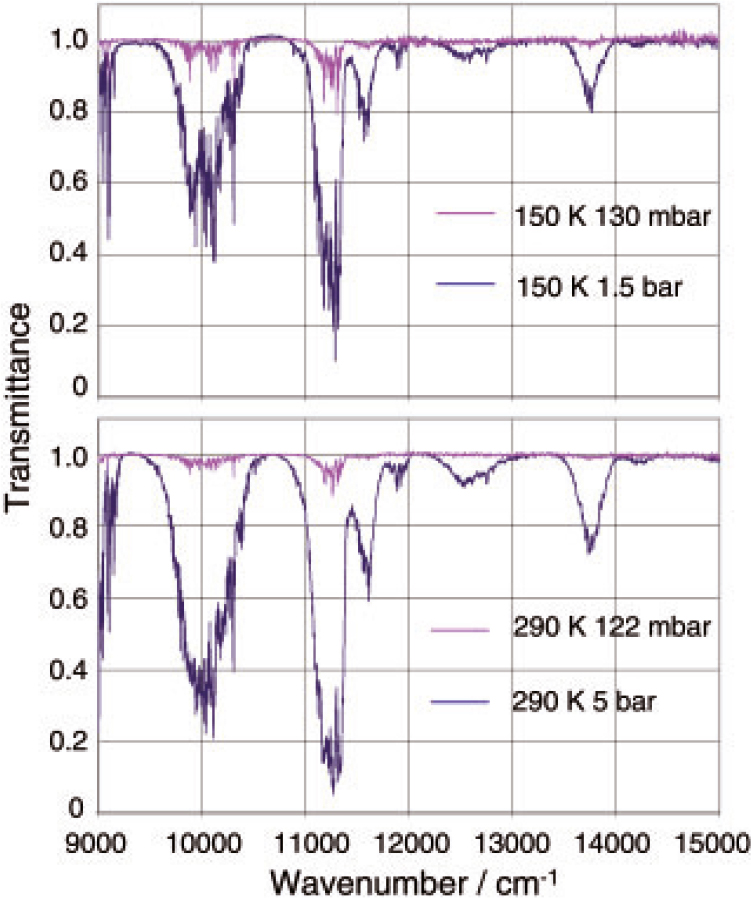 Figure 11. High-resolution methane spectra between 9000  cm–1 and 15,000 cm–1 recorded at the MSF. These measurements were made with an optical path length of 14.4 m, at pressures between 38 mbar and 5 bar and temperatures between 150 K and 290 K. This figure is reproduced courtesy of the University of Oxford.

The MSF has and will always adapt to meet the spectroscopy needs of researchers. Over the years the complexity of measurements undertaken by the Facility has steadily increased, so too has the diversity of projects. Currently, access to the Facility for non-NERC research is limited. Clearly this is less than ideal and efforts are being made to increase capacity and offer services to a much wider community. For example, the proposed merger of the UK PPARC and CCLRC research councils during 2007 may bring opportunities to support an increased number of planetary studies. There are also exciting new technological developments that in a few years could significantly enhance the Facility. In particular the rapid development of mid-infrared and terahertz quantum cascade lasers may offer new levels of measurement sensitivity for high spectral resolution and time-resolved studies. However, above all the future direction of the Facility will be driven by scientific requirements and the needs of customers. Further information about the MSF is available at www.msf.rl.ac.uk.

The author would like to acknowledge all of the visiting researchers over the years that have helped to develop the Facility. For carrying out the research described in this article particular thanks are due to: David Paynter and Professor Keith Shine (Department of Meteorology, University of Reading), Dr Igor Ptashnik (Institute of Atmospheric Optics, Tomsk, Russia), Dr Don Grainger, Dr Daniel Peters and Ranah Irshad (Atmospheric, Oceanic and Planetary Physics, University of Oxford), Dr Grant Allen (School of Earth, Atmospheric and Environmental Sciences, University of Manchester), Dr John Remedios (Physics and Astronomy, University of Leicester) and Dr Neil Bowles and Dr John Barnett (Atmospheric, Oceanic and Planetary Physics, University of Oxford). The NERC are acknowledged for their support of the Facility.

Surfing through the coating system of historic bowed instruments: a spectroscopic perspective
16 March 2021