Exploring the "forgotten" region: an update on NIR spectrometry

Following on from our previous foray into the UV-visible area of the spectrum, in this article we discuss its nearest neighbour in the spectral scale, namely near infrared (NIR) spectrometry. The NIR spectral region lies approximately between 780 and 2500 nm (4000 cm–1 to 12,800 cm–1) bridging the more well-known and analytically used regions of the UV-visible (190–780 nm) and the infrared (4000–600 cm-1). Until relatively recently, it has been called the “forgotten”’ region. However, the arrival of FT-NIR instruments in the 1990s and the increasing awareness of the NIR’s unique information content in the signal that can provide both physical and chemical information, deployment of NIR spectrometry systems for both qualitative and quantitative purposes has become wide spread, particularly in the pharmaceutical industry. An overview by Barton of the theory and principles of NIR spectroscopy is readily available1 and more recently by Workman.2 These applications in the NIR have led to new standard practices for using and qualifying spectrometers being generated by ASTM.3,4

Once again, as in the UV-visible area, many of these changes have been as the result of demand in specific areas, and a requirement to find solutions to defined problems. This renewed interest, particularly in the pharmaceutical industry, has led to the need for traceable standards for the calibration and qualification of the wavelength scale of NIR spectrometers in the regulated environment. Because of the versatility in the sample presentation modes in the NIR, there is a need to ensure wavelength accuracy in transmittance, reflectance and transflectance. For dispersive instruments, wavelength precision is also important because of the use of mechanical wavelength drives. However, for modern FT instruments the precision is so good that it is only the accuracy of the wavelength scale is important.

The wavelength scale accuracy is important because of the excellent signal to noise ratio of the NIR especially in the region above 1200 nm. This facet means that small changes in the spectral response function are spectroscopically significant and hence transfer of spectral information between different NIR systems becomes problematic if the wavelength shifts, amongst others, are not controlled. Regulatory interest has lead to the promulgation of monographs for the specification, calibration and control of NIR spectrometers in both the United States5 and European Pharmacopoeias.6 Unfortunately these monographs have not been harmonised and there are significant differences.

In the area of instrument qualification, we will look briefly at two aspects which continue to cause problems, namely wavelength calibration and absorbance/transmittance accuracy.

The current range of NIR spectrometers are radically different from “conventional” filter-based spectrometers, since Technicon developed the original Infralyser range in the mid 1970s for compositional analysis of agricultural commodities. The transition to lower cost dispersive instruments was made in the 1980s although NIR was already available in 1960s on “classical” research grade instruments made by Cary (as the Cary 14) and others. However, there were several problems that had to be overcome.

First, the silicon photodiode only extended the accessible wavelength range from 850 nm to 1100nm. Full accessibility to wavelengths up to 3300 nm had to wait until InGaAs and modern PbS detector technology was developed. Associated with these developments, and essential for their efficient and improved operation was the use of Peltier cooling. Whilst the InGaAs detector provides superior signal-to-noise, and thereby increased sensitivity over the PbS detector, its range is limited, to the 1800–2200nm region.

Second, the wavelength reproducibility of early dispersive instruments was insufficient to allow the newly developed chemometric procedures to be used effectively. This requirement for wavelength precision catalysed the development of both FT-NIR systems and NIR array detectors, both of which can provided the essential control of this fundamental instrumental parameter.

Last, having solved the above problems, the range of application areas now opening up to the technique also required the design of instruments of a more physically robust nature than usually found in an analytical laboratory, and by definition, portable in nature. Fortunately, for this area of the spectrum, efficient fibre optic materials are relatively cheap and robust, and a simple quartz envelope tungsten halogen lamp provides an effective source. Therefore, given the source, transfer optics and detector, you now have the essential components to build the range of diverse systems available in the marketplace. To view—simply type “miniature NIR systems”—into your favourite internet search engine, and scan the results.

Because of the versatility in the sample presentation modes in the NIR, there is a need to ensure wavelength accuracy in transmittance, reflectance and transflectance. For dispersive instruments, wavelength precision is also important because of the use of mechanical wavelength drives However, for modern FT instruments; the precision is so good that only the accuracy of the wavelength scale is important. This topic has been recently reviewed in some detail7. Numerous wavelength standards have been proposed for transmission work including;

In reflectance and transflectance the choice is more limited.

For most end users, the use of a solid artefact or standard cuvette for wavelength calibration for either transmittance or reflectance calibration is generally preferred for ease of use and its similarity in mode of presentation to the actual sample. However, in many regulated environments, the essential requirement for traceability of the measurement value highlights the current less-than-ideal situation. There are primary materials available from NIST, but these standards have value assignments that are difficult to validate and are relatively expensive. For example see Griffiths et al.8 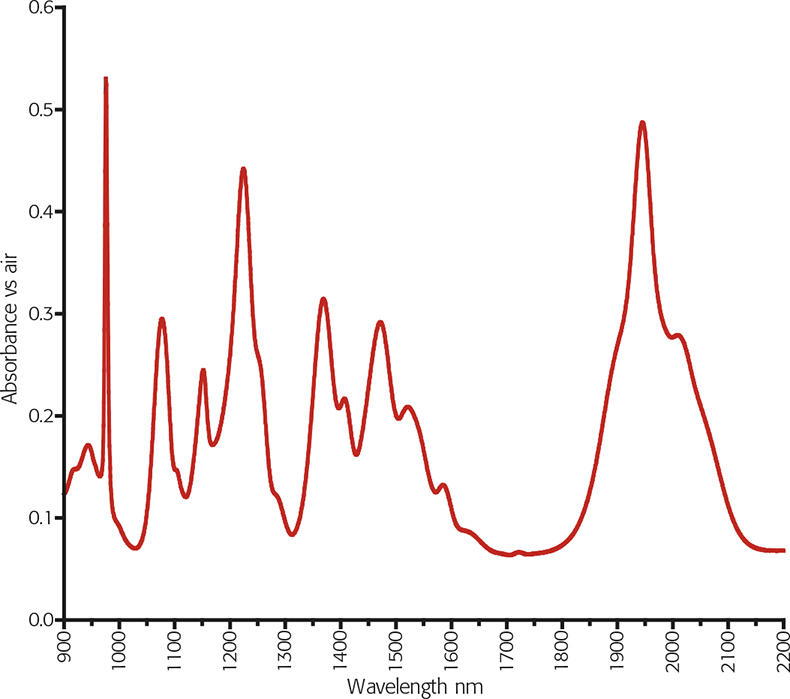 The issue for a wavelength standard is to have sufficient sharp bands covering the wavelength range with traceable values. NIST’s SRM 2035 solid artefact material is shown in Figure 1. This has seven certified bands between 975nm and 1945nm. Unfortunately, the NIST certification is by the Centre of Gravity (COG) method and the peak maxima are given as information only.

Alternatively a new traceable liquid reference material, TS 5, is available which has 13 well-characterised peaks covering the normal NIR spectrometer range based upon peak maxima and have an uncertainty traceable to NIST of ±0.4nm. It has the advantage that it may be used both in transmission and transflectance modes. 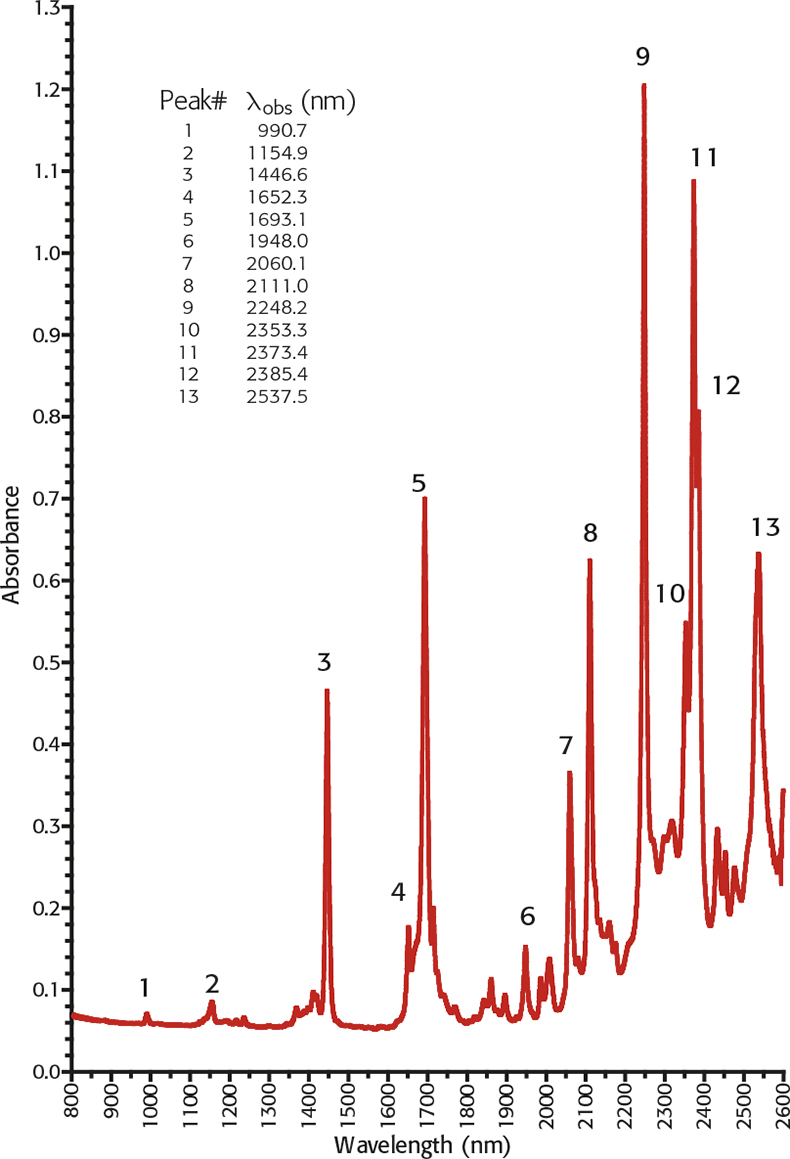 Whilst the situation regarding wavelength verification has a number of possible solutions, as discussed above, the same cannot be said for photometric linearity. Currently the emphasis is on reflectance whereby the USP<1119> current guidance states ‘

However, currently there are no traceable transmittance standards available only reflectance ones. More recently <119> has been updated to include the sentence.

“Photometric linearity is typically characterized using a minimum of four reference standards in the range from 10% to 90% reflection (or transmission).”11

Once again there is a distinct emphasis on reflectance rather than transmittance.

However, the Schott NG series of glasses, (used for over 30 years in the Visible region), have useful spectral characteristics in the form of broad flat peak areas in the NIR. One of the glasses, in particular, has four of these regions where the transmittance value changes are small with respect to a relatively large change in wavelength so there is potential for the future. 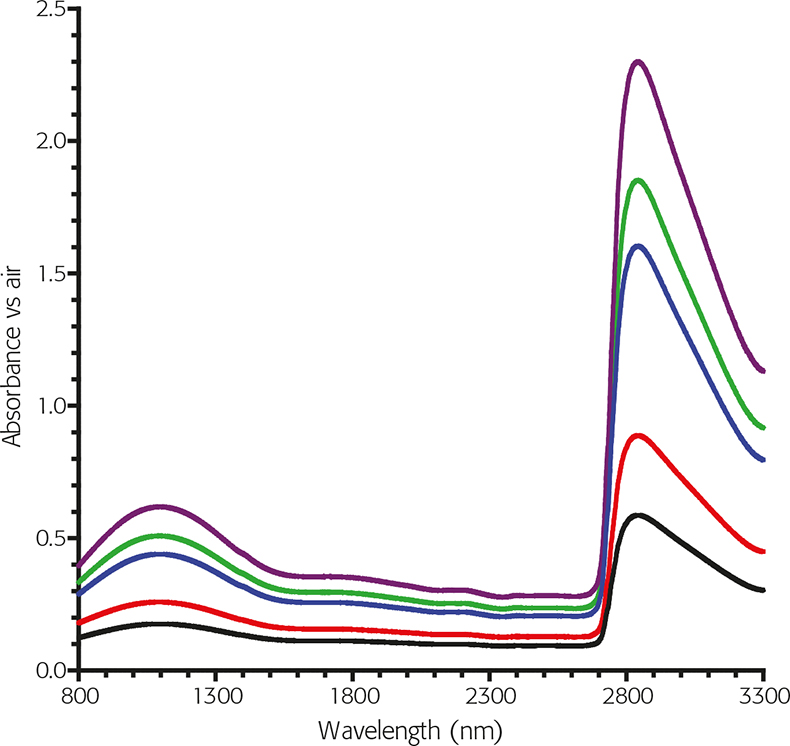