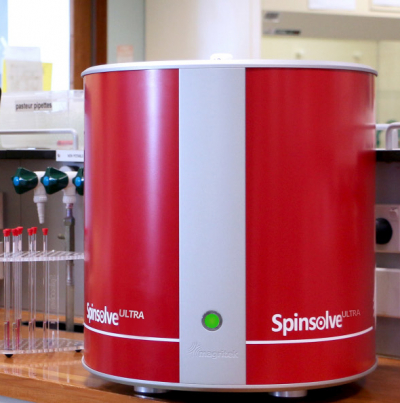 Spinsolve ULTRA is available with multiple different nuclei to give users the possibilities to have a system configured specifically to their requirements. All Spinsolve ULTRA models measure 1H and 19F nuclei, and the multinuclear versions offer a third, optional nuclei that can be 7Li, 11B, 13C, 15N, 29Si or 31P. Users may also ask for the availability of other nuclei. The unit also includes solvent suppression pulse sequences to strongly reduce the signal of protonated solvents that can be more than three orders of magnitude larger than the signals of interest being measured. Spinsolve ULTRA models are available at a choice of operating frequency: 43 MHz or 60 MHz (for 1H). Furthermore, results are produced with no sample spinning, no requirement for compressed air and no need for reference deconvolution data processing.

The high homogeneity of the Spinsolve ULTRA is particularly useful for samples where the compounds to be identified and quantified are dissolved in protonated solvents such as water. Among important applications are the following: the quantification of sugars and alcohol in beverages; the identification and quantification of metabolites in urine; the analysis of contaminants in waste water; fermentation processes in bioreactors. In general, the high resolution offered by the Spinsolve ULTRA is of great advantage for monitoring chemical reactions performed in the presence of protonated solvents and for qNMR of samples where important signals overlap.