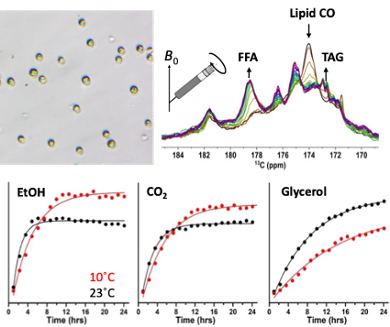 Solution-state nuclear magnetic resonance (NMR) spectroscopy becomes challenging for large structures, such as membrane proteins, polymers or lipid membranes. Magic Angle Spinning (MAS) NMR overcomes the size detection limit by rapid spinning of samples inside an NMR magnet and is typically applied to samples in the solid state. The Leiden University NMR facility houses a 750 MHz NMR spectrometer that recently has been upgraded to optimise micro-imaging and MAS NMR.

To gain selectivity, Anjali Pandit and her postdoc Faezeh Nami used NMR pulses with different “filters” that remove signals of either rigid or dynamic molecules. They used their approach to follow dynamic changes in heterogeneous, photosynthetic membranes extracted from a green microalga. When they proceeded to study intact microalgae, they made a discovery. The cells would still be alive inside the high-field magnet—but as they did not receive light and were deprived of oxygen due to their dense packing, they started to adjust their metabolism and switch to fermentation.

First author Faezeh Nami could detect the accumulation of several fermentation products and distinguish lipids and carbohydrates. The cells were viable for up to ten hours during which fermentation and lipid metabolism processes were observed and a gradual loss of rigid structures, associated with the breakdown of starch and lipid membranes. Cultivated microalgae are often enzyme-pretreated before cell extraction of useful products, to disrupt the rigid cell walls. The NMR results show that concentrating microalgae creates anoxia conditions and subsequent loss of cell rigidity, which may facilitate product recovery.

A limitation of the method is the short viability inside an NMR rotor. Solutions for extending the cell lifetimes are being explored. Live-cell detection of small metabolites has found its applications in biology and medicine. With the power of MAS NMR, detection of macromolecular structures and assemblies in living cells may be within reach.