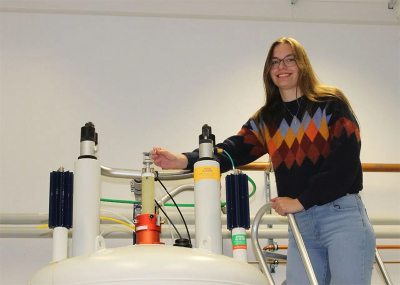 Polyethylene is a plastic that occurs in various molecular structures. Low-density polyethylene (LDPE) is widely used for packaging everyday consumer goods, such as food, and is one of the most common polymers worldwide as a result of increasing demand. Until now, there have only been estimates as to how this widely used plastic degrades after it enters the environment as waste. A research team from the Collaborative Research Centre “Microplastics” at the University of Bayreuth has now systematically investigated this question for the first time. The scientists developed a novel, technically sophisticated experimental set-up for this purpose. This makes it possible to simulate two well-known and environmentally linked processes of plastic degradation independently in the laboratory: 1) photo-oxidation, in which the long polyethylene chains gradually break down into smaller, more water-soluble molecules when exposed to light, and 2) increasing fragmentation due to mechanical stress. On this basis, it was possible to gain detailed insights into the complex physical and chemical processes of LDPE degradation.

The final stage of LDPE degradation is of particular interest for studies addressing the potential impact of polyethylene on the environment. What the researchers discovered was that this degradation does not end with the decomposition of the packaging material released into the environment into many micro- and nanoplastic particles, which have a high degree of crystallinity. The reason is that these tiny particles have a strong tendency to aggregate: they attach rapidly to larger colloidal systems consisting of organic or inorganic molecules and are part of the material cycle in the environment. Examples of such colloidal systems include clay minerals, humic acids, polysaccharides, and biological particles from bacteria and fungi. “This process of aggregation prevents individual nanoparticles created by polyethylene degradation from being freely available in the environment and interacting with animals and plants. However, this is not an ‘all clear’ signal. Larger aggregates that participate in the material cycle in the environment and contain nanoplastics do often get ingested by living organisms. That is how nanoplastics can eventually enter the food chain”, says Teresa Menzel, a doctoral researcher in the field of polymer materials.

To identify the degradation products formed when polyethylene decomposes, the researchers employed multi-cross-polarisation in solid-state NMR spectroscopy, which has not been widely used in microplastics research. “This method even allows us to quantify the degradation products yielded by photooxidation”, says Anika Mauel, a doctoral researcher in inorganic chemistry.

Bayreuth’s researchers have also discovered that the degradation and decomposition of polyethylene also leads to the formation of peroxides. “Peroxides have long been suspected of being cytotoxic, meaning they have a toxic effect on living cells. That is another way in which LDPE degradation poses a potential threat to natural ecosystems. These interrelationships need to be studied in more detail in the future”, adds Nora Meides, a doctoral researcher in macromolecular chemistry.

The detailed analysis of the chemical and physical processes involved in the degradation of polyethylene made us of the interdisciplinary networking and coordinated use of state-of-the-art research technologies on the University of Bayreuth’s campus. In particular, scanning electron microscopy, energy dispersive X-ray spectroscopy, X-ray diffraction, NMR spectroscopy, FT-IR spectroscopy (FT-IR) and differential scanning calorimetry.

Read the original journal paper in Science of The Total Environment