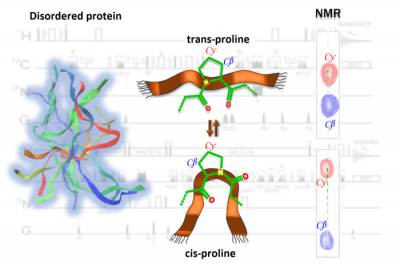 Important processes take place among the subunits of the molecules that make up our cells. Defects in these processes or distortions in the subunits can lead to serious diseases. In order to better understand this, Hungarian and German researchers have jointly developed a method that reveals changes in the structure of proteins more efficiently and accurately than before.

Amino acids are the building blocks of proteins in our body. The amino acid sequence determines the properties of proteins and the processes in which they are involved. In recent years, there has been an increasing interest towards intrinsically disordered proteins (IDPs), which have no stable structure, are mobile and can be described as a set of conformational ensembles. Research has shown that IDPs, or the intrinsically disordered regions (IDRs) play an important regulatory role in various biochemical processes and contribute to the development of many diseases. They have been linked to Parkinson’s and Alzheimer’s diseases, various cancers and type 2 diabetes.

An IDP is rich in amino acids possessing hydrophilic and charged side chains, moreover the presence of proline, which has “structure-breaking” properties, is also common. Proline is difficult to study due to its unique structure, but it is also involved in important biochemical regulatory processes, making its comprehensive characterisation of high importance.

Researchers from Eötvös Loránd University, Hungary, KIT University in Karlsruhe, Germany, and Bruker have jointly developed a new nuclear magnetic resonance (NMR) spectroscopy method based on specific manipulations of quantum states, that can be used to map the function of an IDP easier, faster and more accurate. The method will allow the characterisation of previously unexplored and hard to study biochemical processes. The results will shed light on the mechanisms of the processes involved and will contribute greatly to our understanding of the pathogenesis of certain diseases.

One of the unique properties of proline is that, unlike other naturally occurring amino acids, it is more likely to be present in different forms—cis/trans isomers. While the usual position in proteins is generally trans, in IDPs both forms of proline can occur in varying amounts. The two forms create different structures in the proline environment: trans-proline forms a more elongated shape, while cis-proline forms a turn. These different geometric states of IDPs affect the interactions with their binding partners, thus influencing the way biochemical processes occur.

“Understandably, the determination of the isomeric forms of proline and the quantification of the specific isomers is an important issue. Previously, time-consuming, synthetically achieved, expensive procedures were used to map the influence of proline. These are artificial interventions, that lead to a disruption of the cis-trans proline equilibrium, distorting the results. The proper solution can be achieved by measurement of the real equilibrium that should be based on a technique that is sufficiently sensitive and widely applicable—therefore, a new approach had to be established”, said Andrea Bodor, Associate Professor at the Institute of Chemistry at Eötvös Loránd University.

NMR spectroscopy is a suitable technique for characterising IDPs at atomic level, as characterisation of mobile molecules is not possible with X-ray crystallography and, the nowadays popular, cryo-electron microscopy methods. “In view of this, we needed to develop a technique that would allow the detection of small amounts of proline isomers in a relatively short measurement time with excellent resolution. The advantage of the new method is that the measurements can be performed in any bioNMR laboratory, without the need of special instrumentation”, Andrea Bodor, head of this research project, emphasised.

The effectiveness of the new method was demonstrated on a disordered fragment of the biologically important tumour suppressor protein p53, showing that modifications (in this case phosphorylation) that occur in the body can affect the cis/trans proline equilibrium, thereby steering the function of the protein. In general, it is possible to detect equilibrium isomers for any given protein, especially if it is an IDP, under in vitro conditions without time-consuming and complex procedures. Moreover, the involvement of a given isomeric form in further posttranslational modifications can also be traced, thus leading to insights into the protein function.