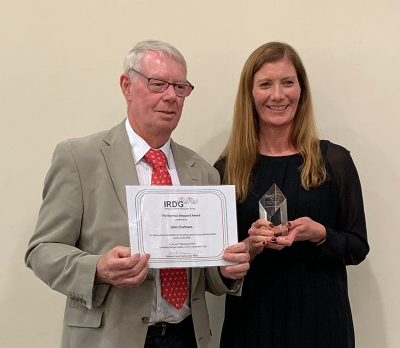 We announced previously that John Chalmers had won the prestigious Norman Sheppard Award of the UK Infrared and Raman Discussion Group (IRDG) for 2018. At the IRDG’s annual Christmas Meeting in London on 20 December 2018, John was presented with the Award by Karen Faulds (IRDG Chair).

After some confusion as to quite how many “A Levels” John had or had not achieved, his career and work was described by Duncan Graham, and ICI colleagues Neil Everall and Geoff Dent. His extensive support of the IRDG and early career scientists was also emphasised.

Again, many congratulations, John, on a very well-deserved Award and thank you for all your work as Article Editor of Spectroscopy Europe.