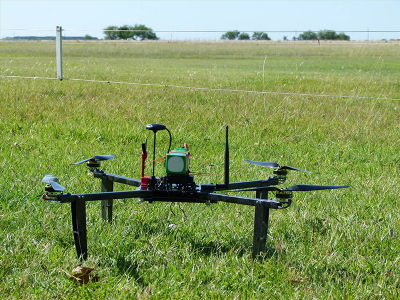 Almost half of countries’ drinking water may be lost before it reaches the tap. A large share of the losses happens in large diameter mains crossing rural areas, where companies have trouble monitoring them due to traditional field surveys being costly and time consuming. European researchers have developed a surveillance service using planes—to survey wide areas—and drones—for sites that are difficult to access—equipped with multispectral and infrared cameras. To analyse the data, they used the “Triangle method”, which combines surface temperature measurements and a vegetation index. This is based on the fact that leaks lead to lower surface temperatures, which can be detected by a thermal infrared camera. However, the thermal response of vegetated soils is different from bare ones, making it difficult to obtain an unequivocal answer in terms of moisture content and potential water loss. The researchers, therefore, added a parameter measuring the vegetation cover fraction, which is inferred by hyperspectral cameras, to get a temperature-dependent humidity scale which varies according to the vegetation. The system has been developed under the EU WADI project.

Compared to competing technologies, the WADI system’s can monitor complex networks and long pipes (50–90 km h–1 depending on the use of drones or planes) and, as it’s airborne, can reach inaccessible or secluded locations over all kinds of terrain. Moreover, the cost of conventional ground detection techniques ranges from 1000 to 5000 euro per kilometre, while the airborne technology ranges from 50 to 200 euro per kilometre.