A Raman spectroscopy method was optimised to examine the chemical changes of aspirin tablets after interaction with helium temperatures. Several aspirin tablets were exposed to plasma-assisted desorption ionisation flame for different times (10, 30, 50, 60, 180 and 300 s) and then analysed by Raman spectroscopy using optimal conditions. The changes in chemistry between exposed and fresh (without exposure to plasma) tablets were compared. The vibrational peaks of the aspirin molecule in the Raman spectrum were identified by checking the peak position. The results showed clear spectra with increases in intensity of vibrational peaks until 30 s, whereas no spectra were measured for the exposed tablets to plasma flame after 50 s. It can, therefore, be assumed that the chemistry structure of aspirin compound might be damaged by exposure to high temperature.

Further details about the degradation structure of pharmaceutical products are required to improve their stability and determine whether the degradation products and impurities have any toxicity.1–4 Temperature is an important component in much of our lives, not least in the climate system, and plays a key role in the chemical change of compounds. Some pharmaceutical compounds are damaged or toxic chemicals produced due to exposure at plasma flame temperatures.5 Exposure to these temperatures has been shown to be related to adverse effects in human health both directly and indirectly. Therefore, these rapid changes are having a serious effect on the environmental and biological impacts of chemical compounds.6

Various analytical techniques such as near infrared (NIR), Fourier transform infrared (FT-IR), nuclear magnetic resonance (NMR) and high-performance liquid chromatography (HPLC) have been used to analyse pharmaceutical solid compounds.7 Recently, investigators have examined the effects of temperature on the stability of pharmaceutical samples. The thermal stability of aspirin samples after treatment at 40 °C and exposure to a 300 W UV-A lamp for 12 h was studied by Al-Maydama et al. and found to be lower to that of the untreated samples using HPLC, photocatalytic, X-ray diffraction (XRD) and scanning electron microscopy (SEM) methods.8 In the study by Acharya and co-workers, IR, mass spectrometry and 1H NMR methods were successfully applied for analysis of the thermal degradation product obtained from the interaction of aspirin and salicylic acid. This study confirmed that the structure of the new thermal degradation product is different to those of aspirin and salicylic acid.9

The chemical composition of artepillin C and p-coumaric acid was investigated using HPLC after exposure to high temperature and it showed that the stability of these compounds was affected.10 However, HPLC is expensive, has long run times and consumes solvents. In the study by Johnsiani et al., several techniques such as NMR, quadruple time-of-flight mass spectrometry (Q-TOF/MS) and electrospray ionisation collision-induced dissociation tandem mass spectrometry (ESI-CID-MS/MS) were used to study the degradation of sorafenib tosylate after exposure to different stress conditions including temperature.11 Vishnuvardhan and co-workers have shown there was significant degradation of the drug silodosin under hydrolytic, oxidative and thermal conditions using LC-ESI-MS/MS.12 HPLC has also been used under these stress conditions to study the behaviour degradation of the drug sofosbuvir.13 A positive degradation was also shown for racecadotril during temperature exposure using NMR, GC-MS and LC-MS/MS.14 Pulsed laser deposition has also been used to study the temperature effect on the chemical structure of copper oxide.15

Aspirin tablets were used in this investigation as a model sample. In this work, the first part deals with the exposure of several aspirin tablets to plasma flame and the second part identifies the chemical composition of each sample using Raman spectroscopy. The presented work aims to use Raman spectroscopy as a simple and suitable method for analysing the thermal stability of drugs during exposure to temperature.

Plasma assisted desorption ionisation (PADI) was used as a source of a plasma flame with helium gas. The visible plasma plume emerges from a coaxial helium gas flow with 13.65 MHz RF. The plasma flame was in near-contact (5 mm separation) with the sample under investigation, using a setting of 8 W and a carrier gas flow of 224 mL min–1. Helium was used with electric discharge to produce electrons, ions and excited state gas. In addition to those, the energy of helium is higher than other gases such as nitrogen and this is enough to make ions and it can give stable signals.16

A Raman spectrometer (model Thermo DXR) was used with a spectral range of 3500–50 cm–1. The Raman conditions, such as laser wavelength, laser power, objective, collect exposure time, sample exposure and aperture, were optimised and found to be: 532 nm, 10.0 mW, 10×, 4.0 s, 2 and 50 µm pinhole, respectively.

Aspirin tablets (containing 300 mg aspirin per tablet) were manufactured by Aspar Pharmaceuticals Ltd, UK and helium gas was supplied by British Oxygen Company gases, UK with a purity of 99 %.

The samples of aspirin tablets were exposed to the PADI plasma for different times after which they were analysed directly by PADI-MS17 without pretreatment and the spectra were recorded as a function of time.

Several samples of aspirin tablets were exposed under atmospheric pressure for different times: 0, 10, 30, 50, 60, 180 and 300 s and then analysed directly by Raman spectroscopy using the optimal conditions previously determined with a total time of 1 min. The temperature in the helium plasma reached 70 °C during the analysis time of 60 s after which it decreased up to 300 s. Therefore, high temperature could be a major factor causing damage to the aspirin molecule.

The samples of aspirin tablets, after exposure to the plasma flame, were analysed by Raman spectroscopy using the optimal conditions as outlined above. The signal intensity measurements of the exposed samples were compared to that of fresh sample (0 s). The chemical structure of aspirin is shown in Figure 1. In Figure 2, there is a clear signal intensity of vibrational peaks for 0-s plasma. The carbonyl group (C=O) has a stretching vibration at 1600 cm–1. The vibrations involve C–H and C–CH3, and were observed at 2950 cm–1 and 1300 cm–1, respectively. Other vibrations, such as C–O–H, O–H and aromatic ring, are shown in Table 1. 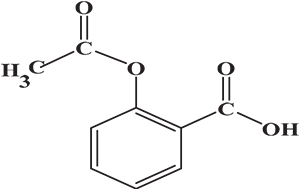 In order to investigate the effect of a plasma flame on aspirin chemistry, the intensity and position of vibration peaks were compared between exposed samples and the 0 s one. The analysis results show the six measurements at different exposure times (0, 10, 30, 50, 60, 180 and 300 s). As shown in Table 2, the signal intensity of vibrational peaks increased up to ~30 s, after which it decreased to 50 s. However, no peaks were detected at 1 min, 3 min and 5 min. No important shift in the peak position was found for any vibration. The observed differences in intensities could be attributed to the chemical structure of aspirin tablets not being affected by the plasma flame until 30 s of exposure time, Figures 3 and 4, while it was affected and changed after this time. On the other hand, the change at 50 s was lower compared to those of 60, 180 and 300 s, Figure 5, because after 60 s, the tablets’ structure has been changed such that it is no longer detectable by Raman spectroscopy. These results confirm there is no damage to the tablets until after 30 s, after which a little was observed at 50 s, and then the damage increased from 60 s to 300 s. 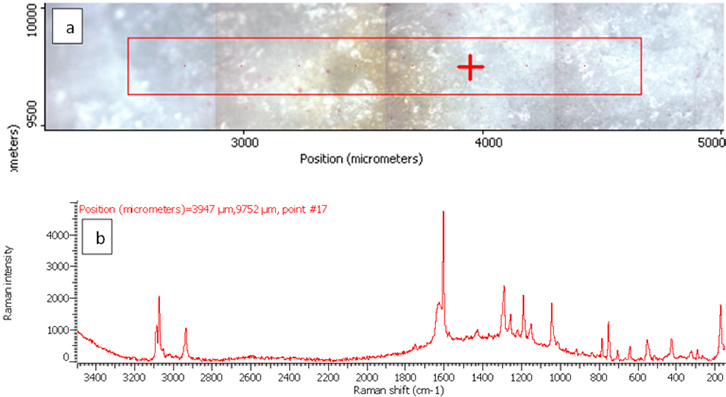 Figure 3. Raman photo surface (a) and Raman spectrum (b) for aspirin tablet after exposure to plasma flame for 10 s. 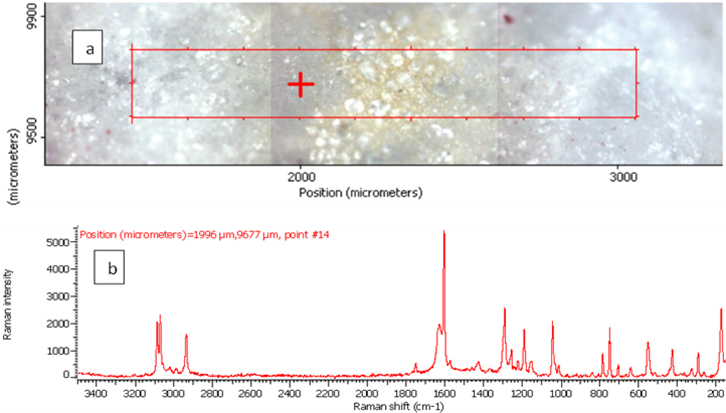 Figure 4. Raman photo surface (a), Raman imaging (b) and Raman spectrum (c) for aspirin tablet after exposure to plasma flame for 30 s. 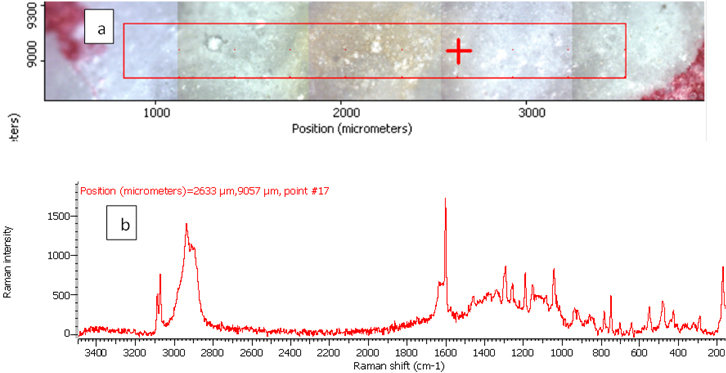 Figure 5. Raman photo surface (a) and Raman spectrum (b) for aspirin tablet after exposure to plasma flame for 50 s.

These results are in agreement with the findings of Al-Maydama et al.8 which showed that the thermal stability and degradation of aspirin samples after exposure to temperature were changed in comparison to those of the untreated samples. In this previous study, the XRD method showed decreases in peak intensities of treated aspirin samples and this might be attributed to the reduction in the crystal structural of the aspirin. In addition, SEM images showed that the surface morphology of the treated samples is changed and the reason for this is that the crystal structure of the treated aspirin particles has a less regular shape than that of the untreated samples. In accordance with the present results, a previous study9 has demonstrated that aspirin suffers from degradation during the thermal reaction with salicylic acid.

In this investigation, the aim was to show whether the thermal stability of aspirin can be affected by interaction with helium temperatures. The temperature of such conditions was chosen for their impact on aspirin tablets to ensure the quality and safety of pharmaceuticals. This study has shown that the stability of aspirin was changed by exposing to a plasma flame for a long time (≥1 min). However, the results have confirmed that the spectra did not show any shift of the vibrational peaks. The results have significant implications for the understanding of how temperature may affect the chemistry of pharmaceutical tablets. Although the current study is based on a small sample, the findings suggest the study should be repeated using different forms of samples. Further research could also be conducted for the investigation by using other methods of analysis such as infrared (IR) and mass spectrometry. 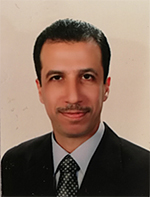 Dr Jasim M.S. Jamur received his BSc Degree in Chemistry from the University of Baghdad in 1995, a MSc Degree in analytical chemistry from the University of Baghdad, Iraq in 1998 and a PhD degree in analytical chemistry from Keele University, UK in 2018. He currently works as an Assistance Professor at the Department of Chemistry, College of Education for Pure Science, University of Baghdad, Iraq. His current research interests include Analytical Chemistry Instrumentation, Mass Spectrometry, Method Development and Separation Techniques. He has published more than 10 research articles and one patent. He is a Reviewer in local and international journals. He has been a lecturer at many conferences in Iraq and the UK.
[email protected]