NMR: still listening to whispering hydrogens? What else do they tell us 50 years after their discovery?

It is now more than fifty years ago that Felix Bloch and Edward Mills Purcell independently discovered a phenomenon called nuclear magnetic resonance (NMR).1,2 Only a few years later, in 1952, both received the Nobel Laureate Physics award for this discovery. Purcell and Bloch were the first to “listen” to the whisperings of hydrogen. They eventually obtained an NMR spectrum representing the different “pitches” of the nuclei, a property, which reflects the physico–chemical (electronic) neighbourhood of the nucleus. While the very first experiments were carried out with a magnetic field strength B0 of 0.18 T (proton resonance frequency ω0/2π = 7.7 MHz), today magnetic field strengths have reached 21 T corresponding to 900 MHz for protons.3 Not only has the field strength increased but with it, over the same time period, the spectroscopic resolution. The discovery of Lauterbur4 that magnetic field gradients can be used to reconstruct a projection of an object marked the starting point of magnetic resonance imaging (MRI), a technique which was soon applied to investigate condensed matter in medicine, physics, chemistry and material sciences. Since then, NMR has opened up a steadily widening window to insights into different objects without their destruction. Today it is a standard technique in medicine known as magnetic resonance tomography. In addition to static images, measurements may be made of dynamic processes on different scales. For example, molecular reorientation, self-diffusion and flow can be accessed directly and non-invasively by modern NMR techniques. Nuclei other than 1H are NMR sensitive, which broadens the area of application. It is impossible in an article like this to review comprehensively the tremendous diversity of applications. Instead, this article will demonstrate the diversity of NMR experiments by discussing some examples of NMR applications carried out at the Institute of Technical Chemistry and Macromolecular Chemistry of Aachen University of Technology (RWTH Aachen).5

A good example for the application of NMR techniques sensitive to molecular motion is the work of Dipl.-Ing. Xiaohong Ren.6,7 NMR techniques are used to investigate the industrially relevant system of catalyst pellets in a reactor, where detailed knowledge of the component flow profile is essential for proper design of fixed bed reaction processes. Due to the non-uniform radial distribution of voids, permeability and interstitial velocity in a critical region close to the wall, the ratio of tube diameter (dt) and particle diameter (dp) may influence the mass transport properties in fixed bed catalytic reactors. By means of Magnetic Resonance Imaging (MRI) and Pulsed-Gradient Spin Echo (PGSE) NMR, Xiaohong Ren studies the velocity profile and the velocity distribution (the so-called averaged displacement propagator) in packed beds at low tube-to-particle diameter ratio with respect to the flow rate Fv (1.0 mL s–1 to 13 mL s–1), the dimension-less tube diameter dt/dp (1.3–30) and the shapes of the catalyst particles.

A typical set of results for the averaged displacement propagator dependency of the observation time Δ is shown in Figure 1. Stationary and moving fluid fractions can be distinguished by their displacement during the observation time Δ. While the molecules in the streaming fluid migrate over steadily increasing distance with growing observation time, the stationary fluid fraction decreases continuously. The dimension-less tube diameter did not change the profile of the averaged displacement propagator in packed glass beads beds, but the shape and the type of the porous catalysts has an influence (Figure 2). The fluid confined in the pores of the cylindrical and the spherical Pt/Ni–Al2O3 catalyst pellets contributes more significantly to the stationary phase, and the spread of the displacement distribution is much broader and more heterogeneous, which leads to a smaller fraction of moving fluid. 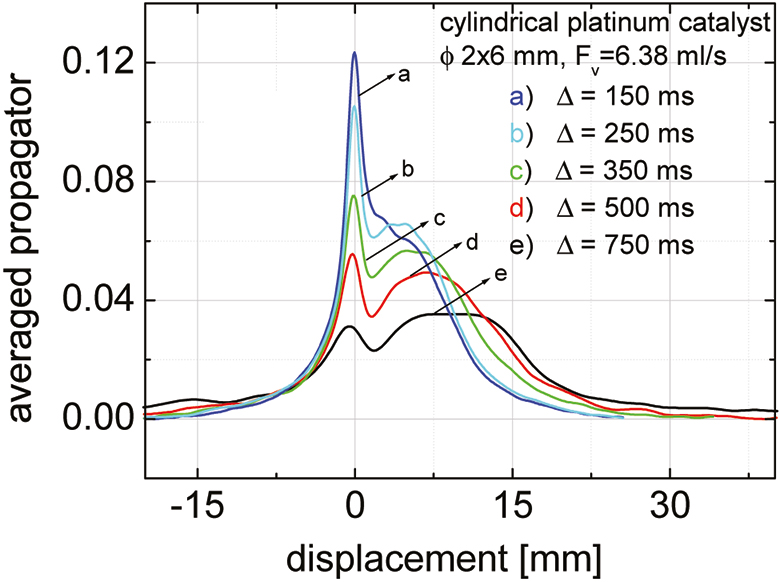 Figure 1. Averaged displacement propagator in dependence of the observation time Δ in a packed bed with cylindrical platinum catalyst pellets. 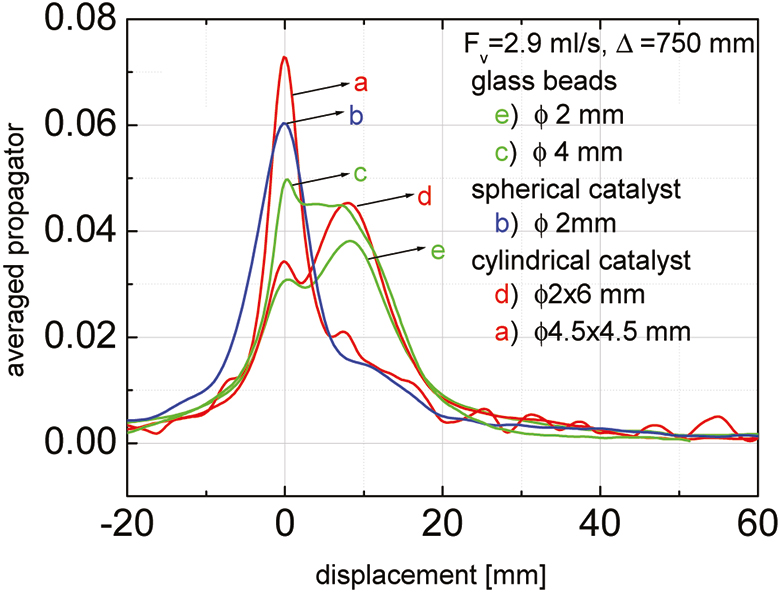 Figure 2. Comparison of averaged displacement propagators in fixed beds filled either with glass beads or with porous catalysts of different shapes.

Convective motion, like the inner vortex-dynamics and oscillation in a falling water drop may also be visualised directly and non-invasively by NMR techniques. This is the work in our group of Dr Song-I Han.8 The falling drop is a simple model for studying chemical extraction where two immiscible phases are dynamically blended to promote the transport of solute molecules from one phase to the other like rain drops cleaning the air. Convective motion inside the drop influences significantly the extraction efficiency. Due to the very short time (about 10 ms) that a falling drop remains in the sensitive volume of the NMR resonator, triggered cyclic acquisition is the only possibility for both signal accumulation and for performing multi-dimensional experiments. Clearly, for this to work properly all drops in one experiment must be the same. This indeed has been investigated carefully and proven by various NMR imaging methods.

In order to visualise the internal fluid dynamics directly, both vz and vx components were measured in each pixel of the zx plane simultaneously within a single experiment to combine these into a vectorial representation (Figure 3). The obtained vector plot unambiguously visualises the notion of the presence of stable vortices within the water drop. 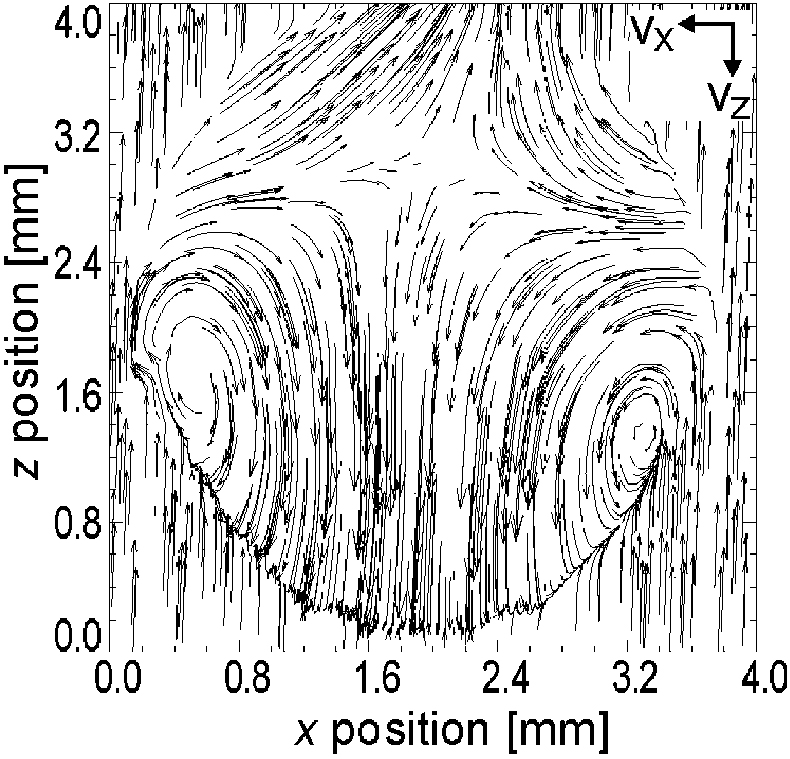 Figure 3. Velocity components vz, vx for a drop of pure water as a function of the position along the zx plane. The magnitudes of the velocities are indicated by the lengths of the arrows. The vz component is scaled relative to the average falling velocity of 2 m s–1. A pair of vortices and an oscillation node are readily identified. 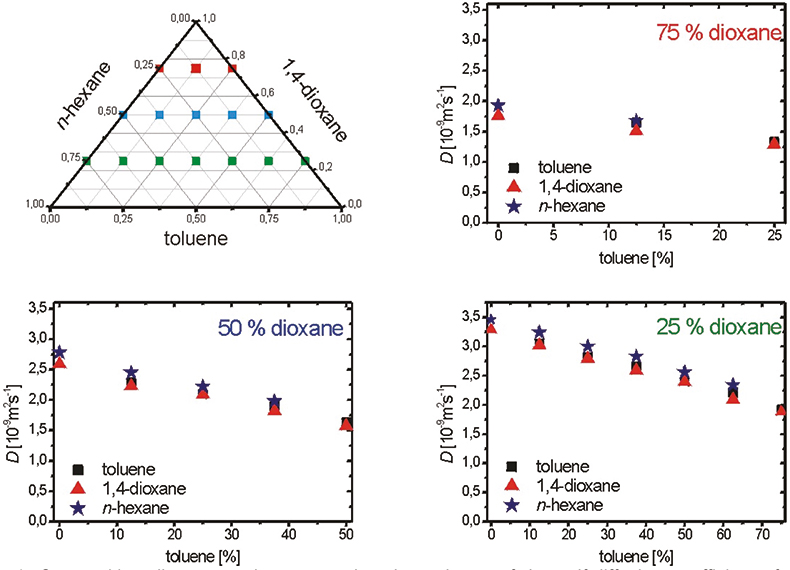 Figure 4. Composition diagram and concentration dependence of the self-diffusion coefficients for the ternary system n-hexane/1,4-dioxane/toluene.

In addition to information on mass transport in pure liquids, self-diffusion may be studied in porous media to obtain information about the pore structure. Dr Marion Menzel has studied the self-diffusion of ice formed from salt water.10 Such ice is a model of sea ice, and it consists of elongated brine pockets in a matrix of fresh water ice. The porous structure restricts the path-length available to the diffusive motion, so that investigations of self-diffusion provide information about the pore geometry, even on space scales below the spatial resolution limit of NMR imaging (Figure 5). Anisotropic and restricted diffusion was observed in sea ice. Brine self-diffusion along the main axis of diffusion turned out to be twice as fast on average as in perpendicular directions indicating small, elongated pores approximately 30 µm in diameter. Marion Menzel also applied fast 1H-NMR imaging with a temporal resolution of 2 min between successive images to follow the dynamics of the freezing process. Figure 6 depicts a time series of images from a cross-section of a brine-filled tube, showing the initial formation of crystallites, which rapidly grow together. 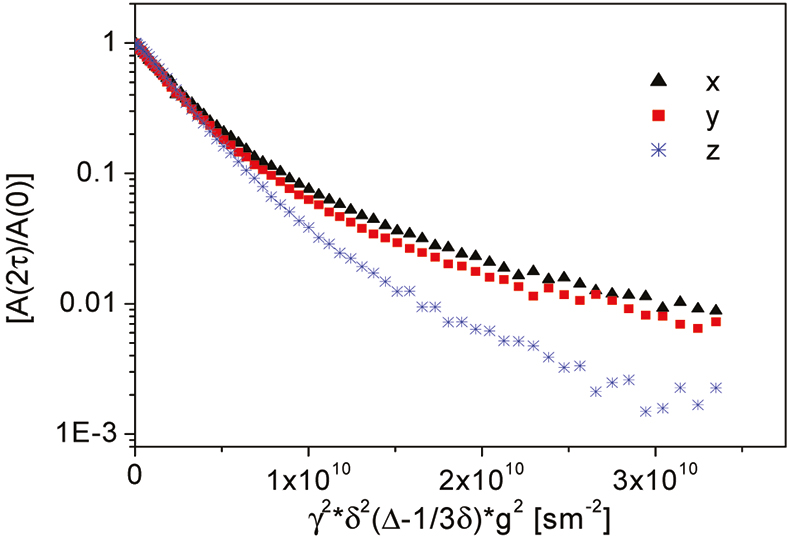 Figure 5. Anisotropic, restricted diffusion in ice from salt water at –15 °C. Two pulsed field gradients of amplitude g, duration δ and separation Δ are used to scan displacement in Fourier space. g is the proportionality factor between magnetic field strength B0 and resonance frequency ω0. The relative NMR signal is shown as a function of these parameters.

Completely different information can be accessed by NMR experiments with 129Xe, a noble gas isotope with an exceptional large chemical shift range. Dipl.-Chem. Kerstin Kletzke together with Dr Stephan Appelt from the research centre in Jülich have shown, that by 129Xe-spectroscopy it is possible to differentiate, for example, between xenon in the gaseous state, xenon dissolved in the aqueous solution in which cells are suspended and xenon inside the cells (Figure 7).11 Kerstin Kletzke and Stephan Appelt propose using 129Xe-NMR to investigate the interaction of the anaesthetic gas Xe with biological cells. Measurement of the Xe diffusion coefficient serves to assess the translational mobility of the xenon atoms and their restriction by, for example, cell membranes. The limitations imposed by the lack of sensitivity of this NMR nucleus can be overcome by hyperpolarisation through optical pumping. In this way the weak nuclear magnetisation is enhanced by several orders of magnitude through the use of laser irradiation. Optically polarised xenon has found widespread applications in NMR spectroscopy. An enormous potential of hyperpolarised xenon lies in transferring its large polarisation to other nuclei via the Spin Polarised Induced Nuclear Overhauser Effect (SPINOE). 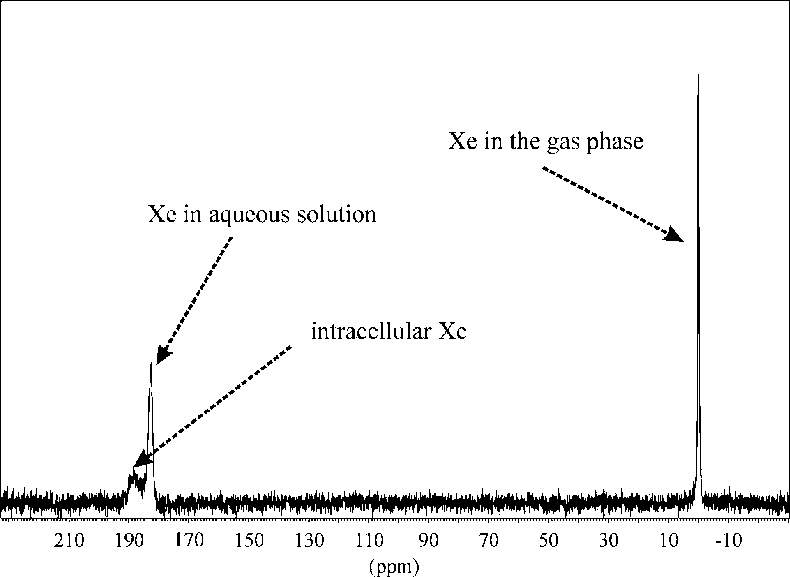 Dipl.-Chem. Holger Kühn in our Institute is one of a number of scientists world-wide who faces the challenge of finding a carrier system which transports the polarised gas to the sample.12 For medical application (e.g. imaging of the stomach) water and ethanol in particular represent two interesting solvents well suited to the study of transport systems. The investigation of pure water, pure ethanol and ethanol/water mixtures (50/50, 70/30, 80/20, 90/10) by 129Xe-NMR single shot experiments, where hyperpolarised xenon was frozen on top of a solvent layer, revealed the dynamics of the formation of Xe/solvent-clathrates. Figure 8 depicts the spectrum of such a mixture. In the vicinity of the free gas (A) a signal arises from void spaces (B) due to a competition between ethanol and water during the formation of different clathrates (C + D). With increasing temperature the void spaces are growing and the signal (B) is shifted towards the signal of the free gas (A). The signal of the liquid xenon (E) disappears 40 s after starting the measurement. Further information about the formation of clathrates can be obtained using spectroscopic imaging methods. 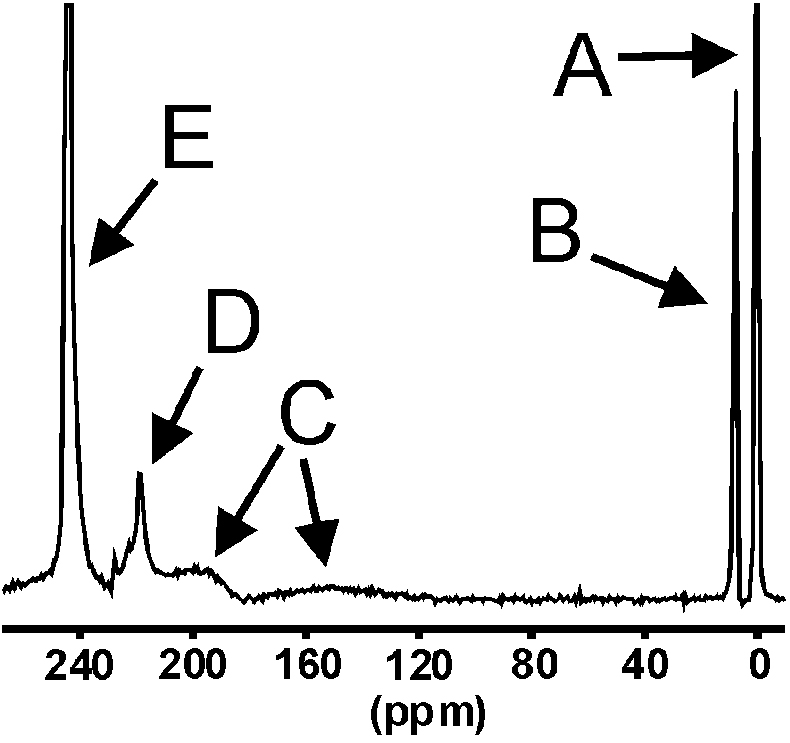 Figure 8. NMR spectrum of a EtOH/H2O mixture (80/20) 30 s after starting the measurement. Further details are given in the text.

The few arbitrarily-selected examples of novel NMR examples discussed briefly in this article demonstrate only part of the enormous variety of NMR applications, which were developed in the last fifty years by many different groups. It can certainly be concluded in the spirit of the very first days of NMR, when the birth of the method in 1945 was rewarded to Edward Purcell with the first whispers of Christmas snow, that it is still worth listening to the whispering nuclei.

Olive oil as seen by NMR and chemometrics
1 June 2003
Nuclear magnetic resonance: stepping up to the PAT challenge
1 August 2007

The use of nuclear magnetic resonance as an analytical tool in the characterisation of dispersion behaviour
1 August 2011
Who has the best proton NMR crystal ball?
1 February 2008