The study of the mineralogical phases of archaeological ceramics may be very helpful in unravelling the history of an ancient sherd, particularly by means that investigate the process of its production. Phase analysis can potentially provide much information on the technology of the production of ceramics, which poses, apart from provenance and dating, a very relevant and important archaeological question that needs to be solved. Revealing the technical skill of ancient potters has been the subject of much research, since it is one of the most important issues for gaining a deep insight of bygone cultures.

Micro-Raman spectroscopy has until now been mostly widely applied in the field of cultural heritage, history and art and its usefulness in the study of the composition of ancient ceramics has yet to be fully demonstrated. With respect to routine methodologies, based on the measurement of temperature-dependent clay properties or on re-firing experiments, the determination of the mineralogical phases, as commonly done with X-ray diffraction spectroscopy, gives a more direct and detailed description of the ceramic composition. There are, however, clear advantages in using a non-destructive, or even better, a non-sampling technique, for this purpose: such advantages could, at least in principle, be practically offered by Raman micro-spectroscopy.

Raman spectroscopy does not usually require any sample preparation; even whole objects, provided they are small enough to be moved and arranged under the laser probe, can be analysed without further manipulation. In the micro configuration the spatial resolution and the depth of field are a few micrometres. These features are really advantageous for the analysis of very thin micro-structures, as these can be spatially distinguished from the surroundings as well as directly characterised without interference from the material underneath. A very thin ceramic coating on a rather thick ceramic body can be thus analysed without any particular effort. The acquisition of a statistically significant set of data points is, however, advisable in order to obtain compositional results representative of the structural item under study, whether this is a ceramic body or a coating.

A Raman measurement provides the associated vibrational spectrum of the molecular species within the irradiated scattering volume. Minerals of importance to ceramics, such as quartz, feldspars, carbonate and iron oxides, for example, are well characterised by their Raman spectra, so that a detailed mineralogical composition may be easily obtained. A critical point is, however, represented by the correlation that can be made between the composition of the ceramic pot under study and the mineralogical changes promoted during time by several factors such as the production process, the usage, the burial etc. In particular, for a study of the production technique, with which we are mainly concerned, the firing process has to be more deeply investigated, through the characterisation of thermally-induced chemical transformations, such as destruction of old and formation of new minerals, as well as conversion into more stable polymorph-phases. Since these latter transformations are almost irreversible, as strictly they depend upon clay composition and kiln atmosphere, the mineralogical phase composition of a fired ceramic may be thought of as a sort of “thermometer” of the maximum temperature reached during the firing process. The detection of particular mineral assemblies, according to the presence or absence of diopside, mullite or gehlenite, which typically form at high temperatures, of calcite, which is indicative of low firing temperature, and of iron oxides, which are those that mainly feel the effects of the firing atmosphere, may then be an invaluable result for inferring firing conditions. [Iron exists in several oxidation states and exhibits a lot of hydro-oxides modifications, which can be easily differentiated by Raman spectroscopy. Moreover, they differ in colour: reduced compounds such as magnetite Fe3O4 are typically black, while the oxidised forms such as hematite α-Fe2O3 are reddish. The firing of an iron-rich clay under reducing conditions (absence of oxygen in the kiln) leads thus to blackened sherds, while a firing under oxidising conditions commonly leads to reddish pots.] Mineralogical changes can be promoted also during the burial period, due to the formation of secondary products; post-burial transformations must also be considered for a correct interpretation of phase analysis.1

In order to show the kind of information that can be extracted from micro-Raman spectroscopy on archaeological ceramics, in this article we report some representative results obtained on 3rd millennium BC Syrian pottery. The samples analysed belong to the Tell Beydar (ancient Nabada, NE Syria) repertoire and pertain to blackened calcareous (A), reddish non-calcareous (B) and reddish calcareous (C) pottery groups (Figure 1 and Table 1).2

Figure 1. Photographs of samples analysed: A calcareous, B non-calcareous and C calcareous wares.

ameasured by the SEM/EDX technique

Fragments were small enough to be analysed “as received” and measurements were carried out on both the covering and the inner body. MicroRaman spectra were acquired using a Krypton ion laser, providing an emission wavelength at 647.1 nm, and an Argon ion laser, providing emission wavelengths at 514.5 nm and 488 nm; high magnification objectives (60×, 100×) were employed for focusing the laser beam onto samples. Sample irradiation was kept at low power values (500 µW to 1.2 mW) in order to avoid any thermal damage. Data acquisition times ranged from 1 to 10 minutes. A single grating monochromator (600 or 1800 lines mm–1) was employed for dispersing the Raman signal, providing a spectral resolution of the order of a few cm–1.

Table 2 summarises the mineralogical composition obtained by microRaman analysis. Quartz, feldspars and rutile minerals are rather common components of clay materials; more interesting are the presence of hematite and magnetite, that could be related to firing atmosphere, diopside, that could be related to firing temperature, and calcite, that is most likely to be of the secondary type due to burial. Each mineralogical component is briefly discussed below and the capability of Raman spectroscopy to make a proper distinction among them pointed out.

Table 2. Mineralogical phases identified. When not specified, we were not able to differentiate between plagioclases and K-feldspars.

Among SiO2 polymorphs, α-quartz is the most known and important phase commonly found in ancient ceramics (due to the high energy required for reconstructive transformations to take place, the high temperature structures tridimite and cristobalite are very rarely encountered). The α-quartz Raman spectrum is characterised by a prominent peak at 467 Rcm–1 and a medium intensity peak at 210 Rcm–1; Figure 2 shows an example of an α-quartz spectrum acquired on C samples. (Rcm–1 is used as the unit to denote Raman shift). 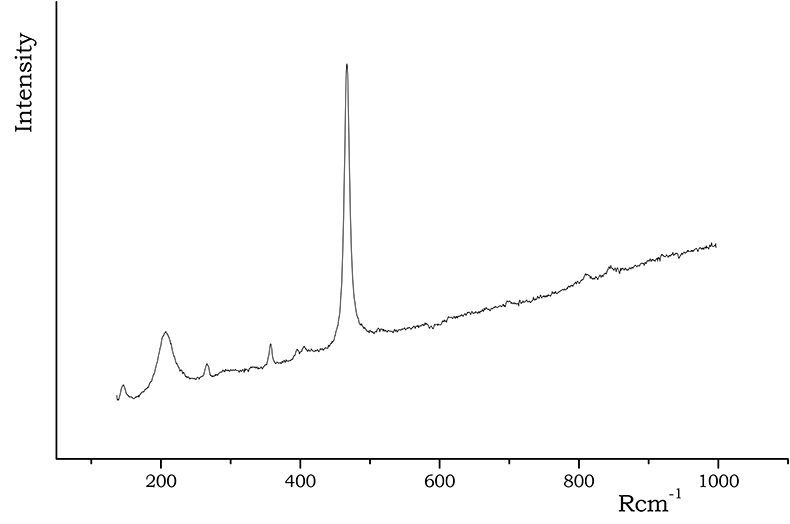 Even if Raman spectra of pure feldspar minerals are well characterised,3 an exact differentiation among all silicate forms is quite complicated, particularly when band shape variations and peak shifts occur, due to slight structural and stoichiometric modifications. Nevertheless, a rough distinction between K-feldspars and plagioclases may still be possible; the former group shows characteristic lines almost centred at 455, 475 and 513 Rcm–1, while the latter gives rise to two intense peaks at about 509 Rcm–1 and 480 Rcm–1, accompanied by a medium intensity signal at 570 Rcm–1. Such differentiation was easily done for the spectra reported in Figure 3; in most cases, however, a broad feature was instead observed, that was generically attributed to “feldspars” (B and C samples). 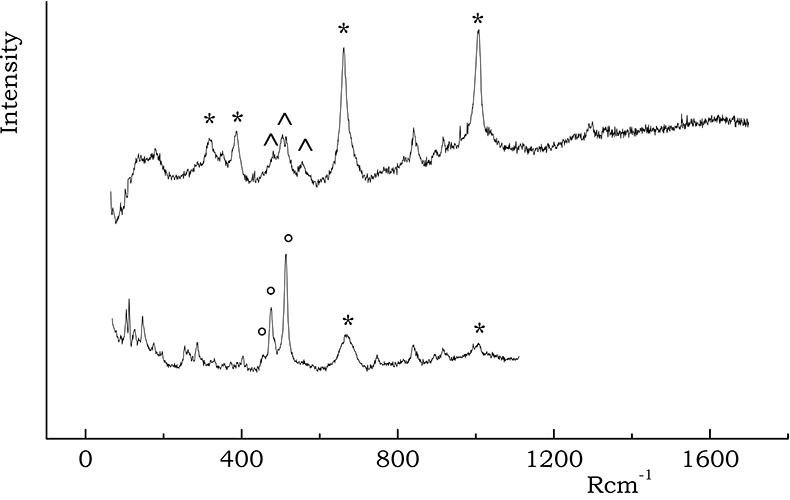 Rutile is also a quite stable mineral, being found even in highly fired pottery. It exhibits a characteristic intense doublet falling at 440 and 610 Rcm–1 (see Figure 4), making it possible to easily differentiate rutile from the less stable TiO2 polymorph anatase.

Iron oxides/hydroxides are well characterised by their Raman spectra. Hematite exhibits a characteristic narrow peak at 300 Rcm–1 together with medium intensity bands at 230, 412, 500 and 615 Rcm–1, while magnetite can be identified by a broad band falling around 670 Rcm–1, which is typical of spinel structures. 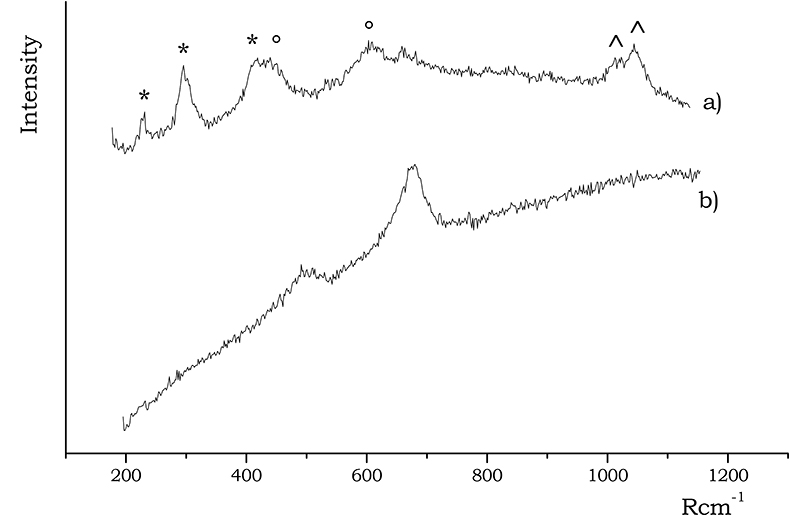 Figure 4. Raman spectra of (a) hematite and (b) magnetite, acquired on B and A sherds, respectively. In the (a) spectrum the bands of hematite are indicated by a *, while those of rutile are labelled with a ° symbol; the doublet marked with ^ is due to Cr(III) luminescence.

Diopside (CaMgSi2O6) is a calcium silicate that starts to crystallise in calcareous clays at a temperature near to 900 °C, because of the decomposition of calcium carbonate. The strongest Raman signals of diopside (Figure 3) fall at about 667 and 1007 Rcm–1 arising from mixed stretching bending modes of Si–O–Si bonds. The medium doublet at 330 and 390 Rcm–1 is also a characteristic of diopside, being due to Ca–O and Mg–O bending and stretching vibrations. The presence of diopside may be taken as a marker of a less mild firing temperature.

The presence of calcite in ceramic pottery may occur essentially for two different reasons: a low firing or a post-burial deposition process. Calcite exists up to ~800 °C, when the CaO formation is promoted, followed by the formation of the so-called “high temperature crystalline phase” made of Ca-silicates or Ca,Al-silicates such as gehlenite Ca2Al2SiO7, wollastonite CaSiO3, diopside CaMgSi2O6 and plagioclases (namely, anorthite CaAl2Si2O8).1 The simultaneous presence in calcareous clays of calcite and high temperature minerals clearly rules out any hypothesis of primary calcite, strengthening the assumption of a secondary origin, due to deposition induced by water of the burial soil. Clearly, in non-calcareous clays calcite is not expected. Also calcium silicates should not be present. Figure 5 reports an example of calcite spectrum acquired on A samples. 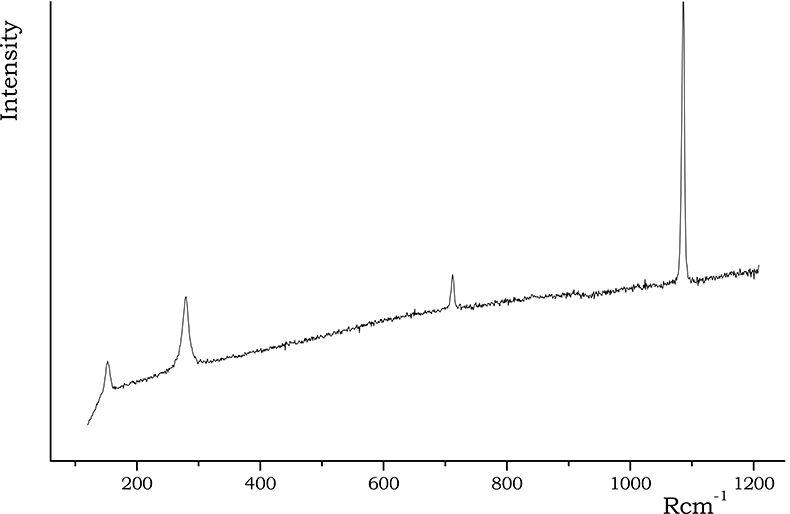 Composition data, together with mineralogical changes induced by firing (temperature and atmosphere) may be then used for an investigation on firing conditions.

First of all, the black colour and the high magnetite content of A blackened calcareous wares suggested a careful control of the kiln atmosphere, presumably maintained rigorously reducing for all the firing process. Due to the presence of diopside and the absence of high temperature reduced minerals, such as hercynite (iron spinel FeAl2O4) and fayalite (Fe2SiO4),4 a firing temperature somewhere between about 900 and 1000 °C can be deduced. The calcite was assumed to be of secondary origin, due to diopside.

In contrast, fragments belonging to non-calcareous pottery B were almost reddish in colour due to hematite, which was largely identified in the ceramic paste of both the covering and the inner body. The firing atmosphere was thus assumed to be of the oxidising type, even if magnetite grains were sporadically identified in the inner body. The kiln temperature was estimated to be similar to that of the previous group, as a stronger heating (approximately above 1050 °C) would have favoured the formation of mullite, a high temperature mineral typical of poor-calcium pottery, which was not detected.

The most important mineral found in reddish calcareous wares C was hematite, suggesting a totally oxidising atmosphere; however, by comparison with the calcareous blackened samples, the firing temperature range was determined to be lower (<900 °C), due to the total absence of diopside. For this reason, the calcite present might be primary calcite, as well as arising from post-depositional calcite due to the burial, or even forming due to a recarbonation of the CaO previously originated during the firing. The mild firing conditions assumed were partly confirmed by the very scarce vitrification, that was largely observed in A and B ware groups.

Micro-Raman spectroscopy has been demonstrated to be a quite useful tool for the investigation of mineralogical composition of archaeological ceramics. It provides non-destructive and highly-selective analysis of both the covering and the ceramic inner body. Compositional results may be interpreted according to mineralogical changes induced by firing (temperature and atmosphere) revealing the existence of three different production techniques: a completely oxidative and mild firing was assumed for C wares, while higher temperatures were probably reached during the firing of A and B wares, under a reducing and oxidating atmosphere, respectively.