Social Media is an interesting source of information on the whereabouts and activities of former colleagues. I was prompted about a change of role for Wieland Hill, a Raman spectroscopist and part of our Molecular Spectroscopic Methods research team back in Dortmund before we all went our separate ways. I congratulated Wieland on his new role as a systems architect and looked forward to seeing his first new building! Wieland responded that he was working on novel Raman system architecture design rather than blocks of flats or fancy museums. This work seemed to be a really interesting use of spectroscopic data processing from optical fibre cables. Looking at his papers this is certainly something we have not covered in this column in the past and, therefore, suitable for this issue!

Reading through some of Wieland’s papers in this area, it was amusing to realise that what Wieland and his colleagues have been exploiting in their work would, in “conventional” spectroscopy using optical fibres, be regarded as annoying disturbing artefacts coming from the optical fibres themselves! As we find ourselves currently in an unexpectedly unstable world, exploiting these signals can, for example, give better border security. This is especially true where long borders, in often remote areas, do not lend themselves to frequent manned patrols or surveillance.1

So, what properties of these optical fibres can be exploited? Well let’s go back to some basics of laser light scattering as observed using optical fibres. The underlying principle of a distributed fibre optic sensing system is to send laser pulses down the fibre and analyse the back-scattered radiation.

Rayleigh elastic scattering of light results from the polarisability of the medium the light is passing through (no change in wavelength).2 The amount of scattering is inversely proportional to the fourth power of the wavelength (try using that explanation to your children of why the sky is blue!3). Usually unwelcome in optical fibres as it gives rise to attenuation of the intensity of the laser light passing through the fibre.

An inelastic scattering process resulting in quite small changes in wavelength of the scattered light. Brillouin scattering is created through the interaction of the incident photons with periodic vibrations (phonons) of, for example, the matrix the light is passing through. Can be a linear or non-linear effect induced by the incident laser beam itself or interaction with counter propagating light (spontaneous or stimulated Brillouin scattering).4

These three effects yield scattered light at either the same frequency as the incident laser light (Rayleigh) or at shifted frequencies with Raman scattering showing the greatest change in frequency from the incident radiation. Figure 1 shows (badly not to scale) the frequencies of the different scattering phenomena relative to that of the original incident laser photon. The different colours in Figure 1 represent a change to the steady state signal observed due to physical effects which will be explained in the next section. 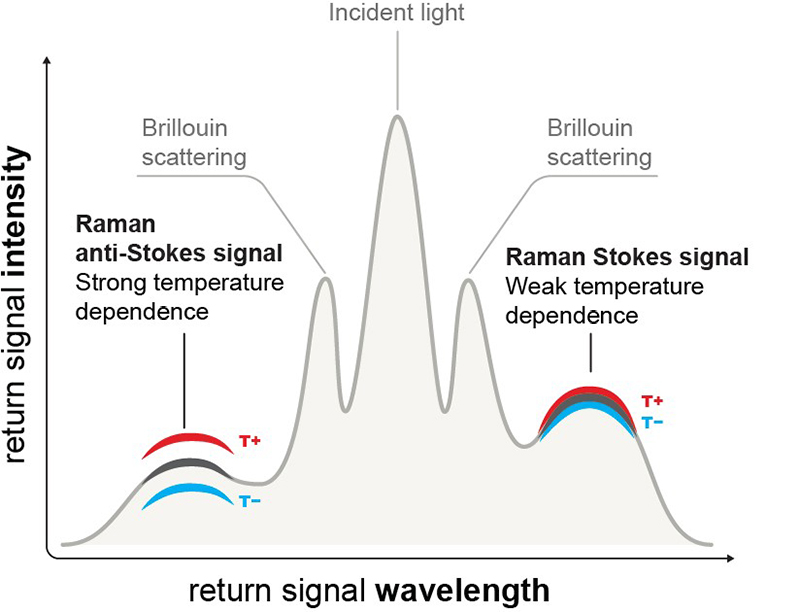 Figure 1. Relative frequencies of the inelastic scattered radiation from the Rayleigh, Raman and Brillouin scattering relative to the laser frequency. The blue and yellow lines represent the changes to the respective scattered light when used in a fibre-optic sensor. © 2012 AP Sensing

With the correctly designed equipment, there are three different phenomena giving rise to scattered radiation that can be measured. Each phenomenon is susceptible to changes in physical parameters/environment of the optical fibre. Now, Figure 1 shows both the Stokes and Anti-Stokes scattering frequencies indicating that energy is lost to the media or gained from it during the scattering process. All three scattering processes are impacted by changes in the temperature of the system and two of them are also sensitive to strain.

Brillouin scattering is also susceptible to temperature, but also to strain in the system, resulting in both intensity and frequency changes for the scattered light. Having two potential sources for changes in a metrology signal is a complication which needs addressing to be certain which effect, and in what proportion, is responsible for the intensity changes observed.

Rayleigh scattering doesn’t change frequency, but does exhibit changes in intensity and phase of the scattered photons which are derived from temperature again and dynamic strain. By now I am sure you are beginning to realise why a company involved in designing robust and novel systems in this area has need for a systems architect such as Wieland! Apart from presenting some difficult challenges in the production of complex spectrometers to measure the respective signals, what use are such physical parameters in distributed sensing over long distances?

Tiny changes in the length of the optical fibre cause changes in the interference patterns from multiple Rayleigh scattering centres. Any acoustic events occurring in the vicinity of the optical fibre cable are “heard” by the cable and can be measured by the changes in the Rayleigh interference patterns. You can imagine that being able to detect somebody walking along the outside of your security fence by the impact of their feet on the ground or attempts to tunnel under your security wall by the impact of spades in the earth.

With appropriate signal processing to filter out false alarms this operates as an excellent distributed warning system. Using communications-grade optical fibres, it is possible to monitor many kilometres distant from the location of the spectrometer. Thus, providing not only warning but also location of ongoing incidents. If we take an example that has been in the news a lot during this record-breaking year for drought and water shortage in Europe. A distributed fibre optic sensing system could easily warn of and locate a breach in a water supply pipeline. Saving not only costs in locating the breach, but also enabling a much more rapid response time before too much resource had been lost and minimising the damage to the environment around the breach.

Brillouin scattering has been adopted for distributed strain sensing for major infrastructure projects where long-term environmental changes such as ground shifting around a pipeline, for example, could pose serious problems for the deployed infrastructure investment.6 Brillouin scattering has also proven to be capable of the longest optical fibre cable length deployments of hundreds of kilometres when combined with Raman amplifiers and remotely pumped optical amplifiers.7 Reaching the theoretical limits of distance range, spatial and temperature resolution is the main challenge of designing advanced distributed sensing systems. You cannot just add another amplifier when the signal vanishes in its shot noise, so you need to think carefully about the right architecture.

Raman scattering can deliver robust temperature monitoring over tens of kilometres of infrastructure, such as power distribution cables, the inside of road tunnels or chemical plant. In power cables, the detecting optical fibre cable can actually be integrated into the cable screen itself making deployment a much simpler affair.

I am very pleased to see that Social Media can not only be used for organising college reunions and promoting bullying between school children, but has also enabled me to spot Wieland’s new appointment. This has led to reading some interesting articles about a field of spectroscopy and spectroscopic data processing about which I knew next to nothing. For further reading and a large table detailing many more applications than we have room to discuss here, see Reference 8. 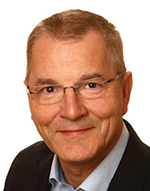 Wieland Hill has long-term experience in academic research as well as in the industrial development of ­lasers, micro-optics and instruments for fibre-optic sensing, notably with Lambda Physik, LIMO, ­JENOPTIK, LIOS Technology, AP Sensing and research centres in Germany, Austria, Ukraine and Russia. His current activities include distributed temperature, strain and acoustic sensing. 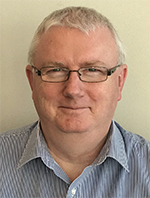