According to the World Health Organisation (WHO), a counterfeit drug is one that is deliberately and fraudulently mislabelled with respect to identity and/or source. Counterfeiting can apply to both branded and generic products; counterfeit products may include products with correct or wrong ingredients, without active ingredients, with insufficient active ingredient or fake packaging.1 During the last decade, the amount of counterfeit drugs on the worldwide market has rapidly increased. It is difficult to determine the exact scale of this problem, since not all counterfeit drugs are reported or even detected. The drugs that are often counterfeited can be divided into two groups, depending on the region where they are brought onto the market. In developed countries, expensive life-style drugs like Viagra® and Cialis® are often counterfeited, while in developing countries, drugs to treat life-threatening illnesses like malaria are often counterfeited.

The first step in detecting counterfeit drugs is the careful visual inspection of the package and label, since even the smallest modifications may indicate a potential counterfeit. Since counterfeiters are becoming increasingly more sophisticated, additional analytical techniques are necessary to detect these counterfeits. So far, several analytical techniques have been used to detect counterfeit drugs, for instance high-performance liquid chromatography (HPLC), thin-layer chromatography (TLC), X-ray diffraction (XRD), near infrared (NIR) spectroscopy or colorimetric reactions. The downside of these methods is that they require sample preparation or that they only focus on a single component.

Three different genuine erectile dysfunction drugs are available on the market: Viagra®, Cialis® and Levitra®. Viagra® is the most commonly counterfeited drug, but the amount of counterfeit Cialis® has rapidly increased over the last few years. The possible counterfeits analysed consisted of two Viagra® tablets, SEYAGRA-GEL containing the same active ingredient as Viagra® and two tablets claiming to contain the same active ingredient as Cialis®.

The Raman spectra were recorded using a Renishaw system-1000 spectrometer, which is connected to an Olympus BH-2 microscope. The diode laser has a power of 50 mW at the source and a wavelength of 785 nm. A 5× Olympus objective lens is used and the collected Raman radiation is dispersed with a 1200 lines mm–1 grating and focused onto a Peltier-cooled CCD detector. All spectra are recorded in the spectral window of 200–1800 cm–1. The recorded spectra are averaged (three per sample) and baseline-corrected with ACD/Specmanager (Advanced Chemistry Development, Inc., Ontario, Canada) to eliminate the influence of broadband fluorescence.

In Figure 1 two possible counterfeit Viagra® tablets (B and C) are compared to a genuine Viagra® tablet (A). Each is shown as a pair of photographs taken on an opposite side. Based simply on a visual inspection, tablet C clearly shows differences to the genuine one. The Pfizer logo is lacking and the amount of active ingredient is mentioned as “50 mg” instead of “VGR 50”. The Raman spectra of the two possible counterfeits and the genuine Viagra® are shown in Figure 2. The three Raman bands of (anatase) titanium dioxide (TiO2),5 at 394, 513 and 634 cm–1 and the Raman bands of the active ingredient (sildenafil citrate),4 at ca 1580, 1528, 1401, 1236 cm–1 are present in the three Raman spectra. However, the Raman spectra of the two possible counterfeits contain an additional Raman band at 980 cm–1, which can be assigned to barium sulfate (BaSO4).4 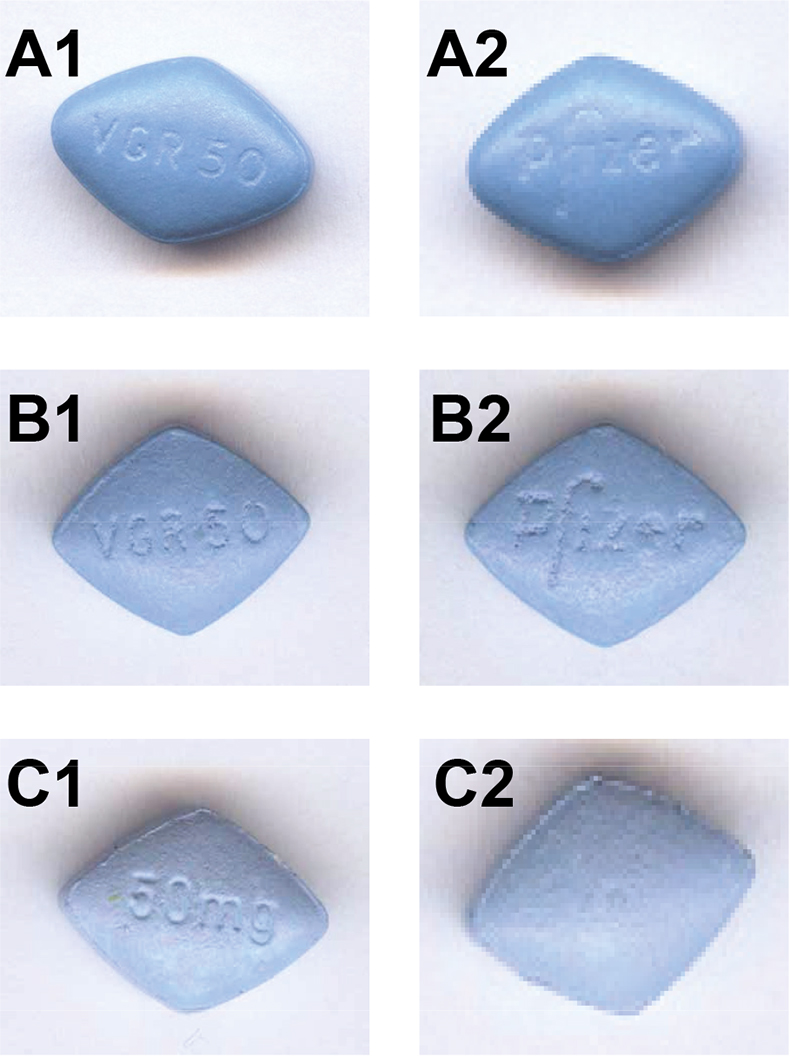 Figure 1. Photographs of both sides of the genuine Viagra® tablet (A) and two possible counterfeits (B and C). 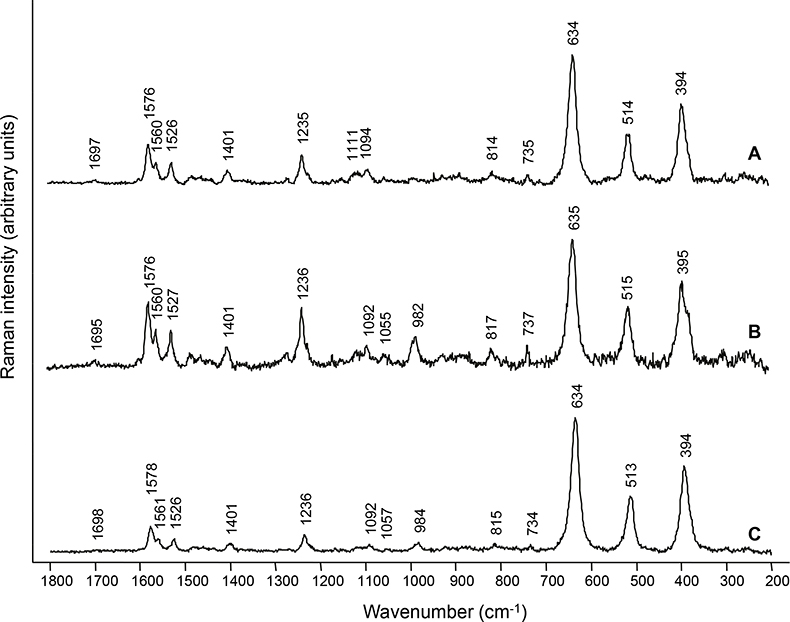 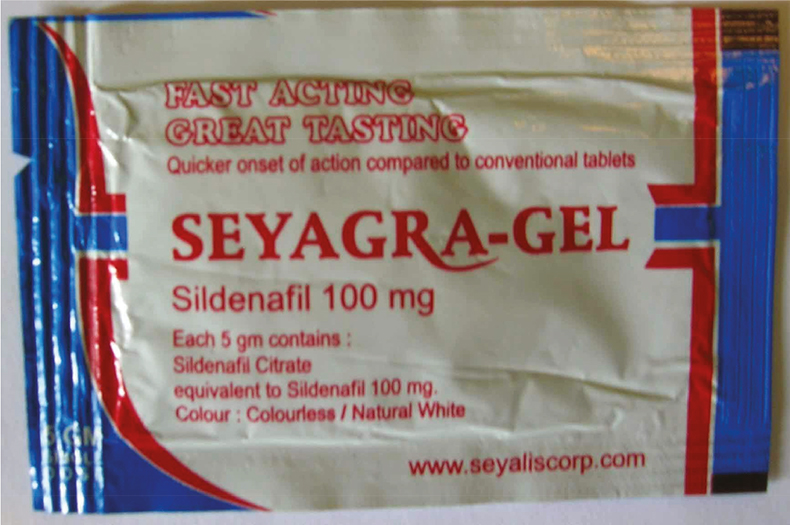 Figure 3. Photograph of the SEYAGRA-GEL. 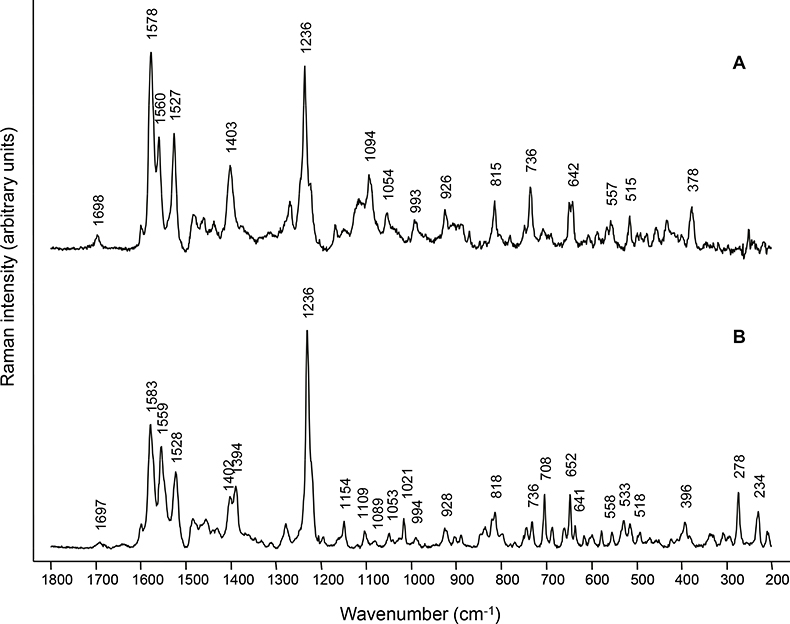 Visual inspection of the counterfeit tablets shows a clear difference in appearance compared to genuine Cialis® (Figure 5). The manufacturer of these tablets claim that the tablets have the same active ingredient as genuine Cialis®, namely tadalafil. Figure 6 shows the Raman spectra of genuine Cialis® and the two seized tadalafil tablets. 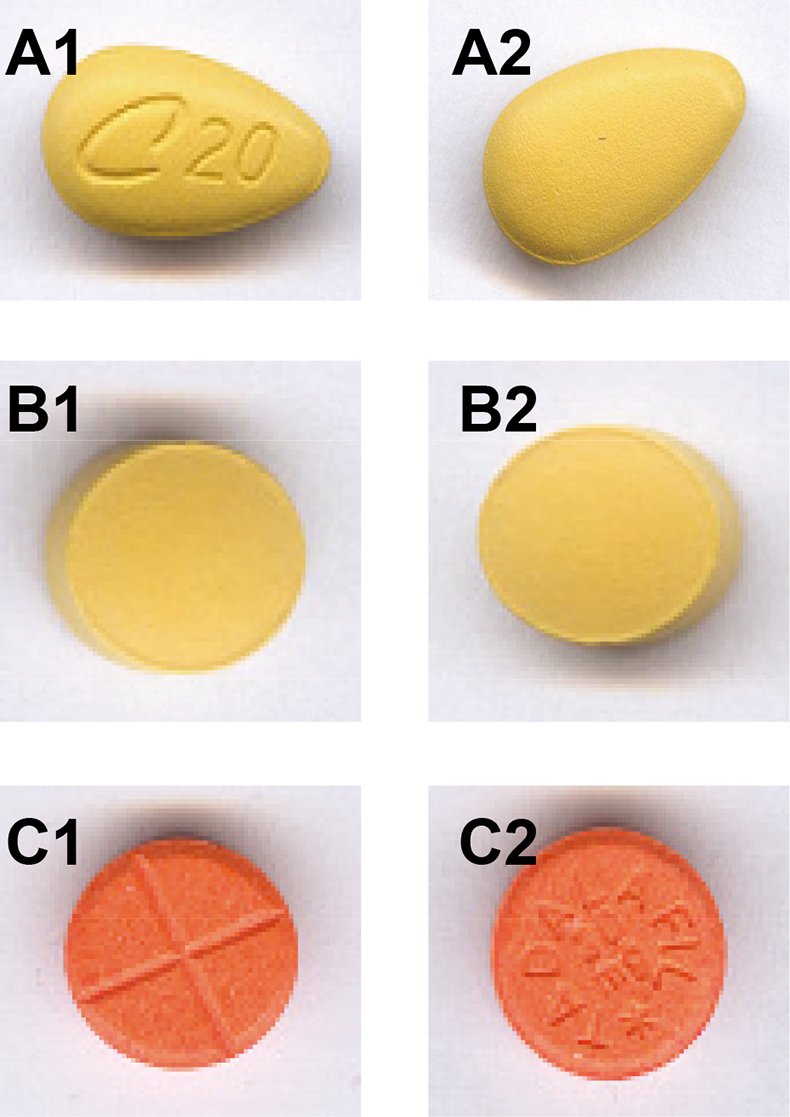 Figure 5. Photographs of both sides of the genuine Cialis® tablet (A) and two possible counterfeits (B and C). 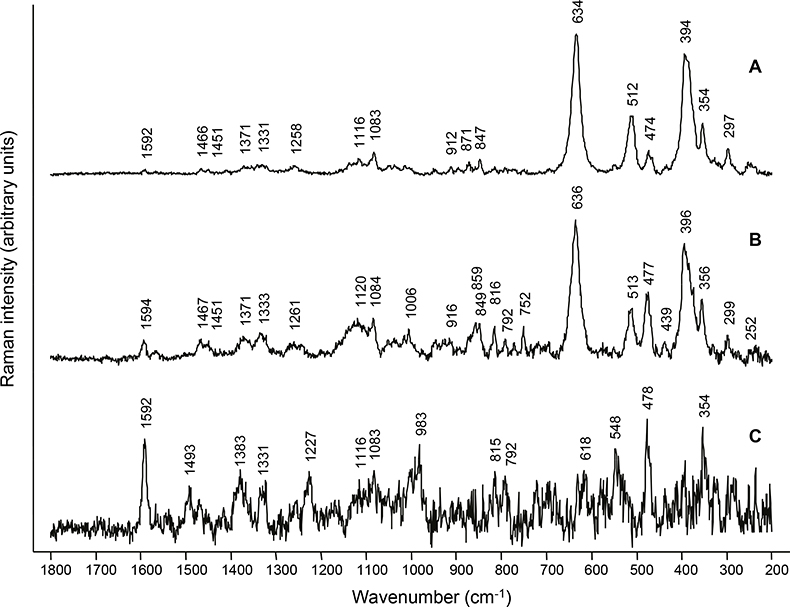 Second, the Raman bands of lactose6 at 353 cm–1 and 474 cm–1 are observed to be present in the three Raman spectra. However, the ratio between these two Raman bands differs significantly in both counterfeits (1 : 1 for B and 1 : 3 for C) compared to the genuine Cialis® (2 : 1). The increase of the relative intensity of the Raman band at 474 cm–1 can be attributed to starch.4 The second counterfeit tablet (Figure 6C) also contains the Raman band of barium sulfate4 at 984 cm–1.

Based on a simple visual examination of the drugs, only a few counterfeits could be detected, which illustrates that counterfeiters are becoming increasingly sophisticated. Based on the analyses with Raman spectroscopy, all spectra of the Viagra® tablets, the Seyagra gel and the Cialis® tablets show the distinctive Raman bands of the correct active ingredient.

Multimodal imaging of cells and tissues: all photons are welcome
1 October 2017