Standards for the 21st century; establishing trust in measurement

Spectroscopy and spectrometry have been around for a long time. In the “modern” era, spectroscopic instruments have been with us in one form or another for over 70 years. This is particularly true for those old “workhorse” techniques, UV-visible and infrared. So by now it might be reasonable to think that we would enjoy a standardisation and calibration environment that would make the assurance of our spectral data quality a matter of routine. Perhaps or perhaps not! Nothing stands still in the application of analytical science to assuring quality. As the column title rightly suggests Quality does Matter.

The rate of change of instrumentation and its application base accelerated during the 1980s with the availability of substantial data processing power and new technologies being incorporated into the humble spectrometer. Suddenly some of the reference materials we relied upon for qualifying and calibrating our spectrometers were no longer “fit for purpose”. Not only were end users in the laboratory faced with these issues but also the instrument manufacturers. At the same time as these technological changes were occurring so too were regulators. Regulatory bodies in a variety of fields, pharmaceuticals, medical devices, environmental, food to name but a few were becoming increasingly interested in the quality of the data coming from our laboratories to ensure compliance with national and international standards.

When discussing the need and role of standards, we need to consider the major changes that have taken place over the last 50 years in four key areas: The National Metrology Institutes (NMIs), the instrument manufacturers, the user base and the globalisation of regulation through international regulatory bodies.

Our NMI laboratories are the guardians of metrological traceability. Spectroscopic science relies upon their maintenance of the fundamental units of length and time and primary metrological standards. This is as true today as it was 70 years ago. What has changed over this period is the ability and willingness of national laboratories to provide secondary reference materials for transfer calibration in the laboratory. For example, in the heyday of the NBS in the US, (National Bureau of Standards now NIST, National Institute of Science and Technology), the Center for Analytical Chemistry in conjunction with the Radiometric Physics Division researched, developed, produced and certified many spectroscopic reference materials as SRMs (Standard Reference Materials) which were widely used in the analytical laboratories covering a wide range of formats, neutral density filters, solutions and solid chemical materials. Indeed many national laboratories offered artefact recalibration services for transmittance, reflectance etc. until relatively recently.

The changing role of national laboratories is typified by NIST’s phased withdrawal from secondary reference material activities over the past 10 years. When stocks of SRMs were depleted, NIST did not have the resource or the inclination to replace them. In fairness to NIST, satisfying the demand for CRMs that grew globally in the 1980s and 1990s was not in their remit. Take NIST SRM 2034, holmium oxide in perchloric acid solution as an example. This was developed in the NBS in the 1980s and became globally adopted for the wavelength scale calibration of UV-visible spectrometers from 240 nm to 640 nm. Full documentation of the work was published in 1986.1 This basic standard has now been phased out although fortunately after work to make it an intrinsic standard was completed.2 What is not so fortunate is the phasing out of the neutral density glasses SRM 930 and 1930 and the reliance on accredited reference material suppliers without a primary source. However, there is an appreciation of the requirement at NIST to still provide a re-certification service for existing SRM 930, 1930 and 2930 sets, at the primary level.

Even NIST at its best did not produce large varieties of SRMs for spectroscopy. It has published 16 Special Publications on spectroscopy over the last 45 years, which is small compared with the total of 153; this is illustrated in Figure 1. It is clear also from this Figure that the National Laboratory sector is not going to be able to satisfy the industrial or regulatory demand across all sectors. 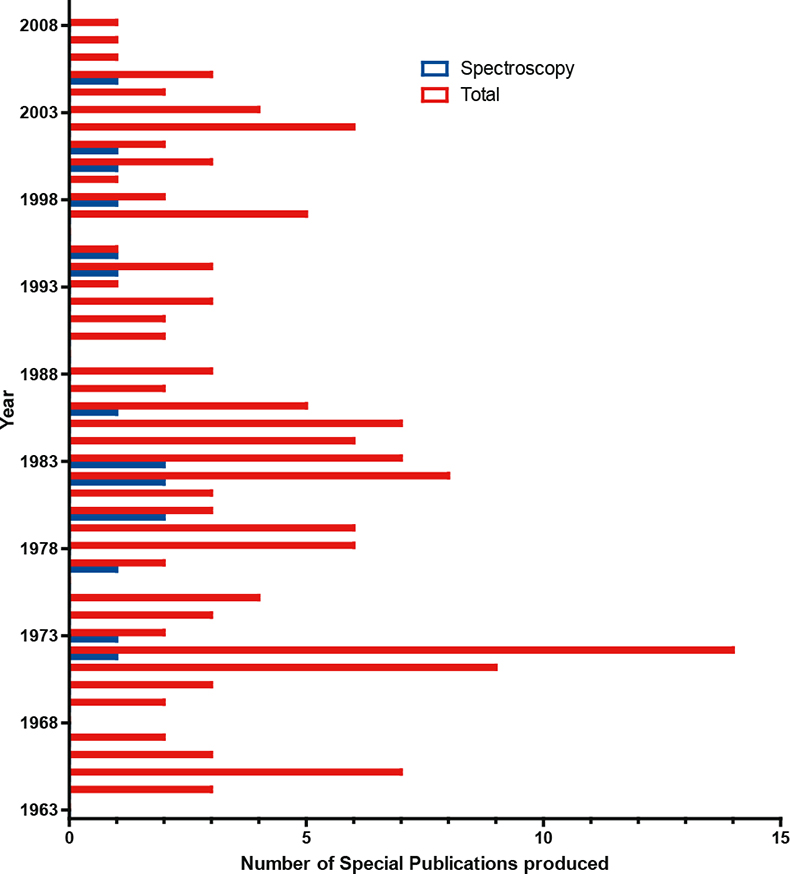