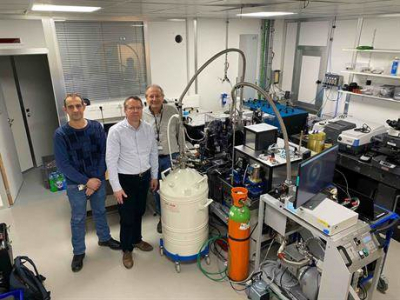 The existence of metal-phase hydrogen was predicted more than 80 years ago, sparking a race to observe it ever since within the high-pressure physics community. While there have been many claims of proof in recent years, none have managed to convince the scientific community.

The insulator–metal transition of hydrogen has now been observed thanks to the development of a new kind of diamond anvil cell that can exert over 4 million times the Earth’s atmospheric pressure and able to probe a sample measuring only a few microns in diameter. Together with the non-intrusive measurement of the insulator–metal transformation using very bright infrared radiation produced by the synchrotron, this allowed the researchers to observe the transition to the metallic phase, detect the signature of the sample’s metallic profile under pressure and, with great precision, identify the pressure at which transition occurs. Their results are the outcome of many years of research entailing constant advances in diamond anvil cell technology and in experiments using such large instrumentation.

The simplicity of hydrogen has played a key role in the development of modern physics. At the beginning of the 20th century, Quantum Mechanics led us to understand the properties of the hydrogen atom, and then of the dihydrogen molecule (H2). However, producing an accurate description of its behaviour under pressure that would provide data on the hydrogen phase diagram entails extremely complex computations and experiments. The data obtained are a world first and will be used to advance theoretical models. The results have been published in Nature.