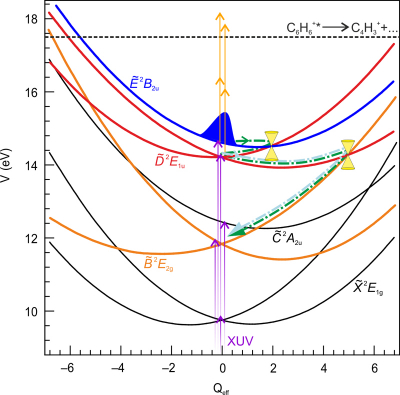 Observing the crucial first few femtoseconds of photochemical reactions requires tools typically not available in the femtochemistry toolkit. Such dynamics are now within reach with the instruments provided by attosecond science. In a study published in Nature Communications, researchers from Max Born Institute for Nonlinear Optics and Short Pulse Spectroscopy (MBI) characterise one of the fastest internal conversion processes in a molecule studied to date.

Horst Köppel published his first article on the benzene ion molecule in 1987. Köppel, a professor from Heidelberg, had found the perfect testbed for the ensuing development of a new theoretical methodology, the so-called multi-configurational time-dependent Hartree method, for which he and his colleagues became famous over the next few decades. The omnipresent benzene molecule, whose backbone is a ring consisting of six carbon atoms, turns out to be the perfect compromise between complexity and chemical relevance. That is why the theoreticians from Heidelberg studied it in more and more detail, publishing more than 30 papers over the years, as they matured the theory into a cutting-edge tool for computational chemistry, which is now being used by researchers all over the word.

One thing was out of reach though until now: the experimental verification of the theoretical results in a time-resolved experiment. The predicted dynamics in the benzene ion was simply too fast—on a timescale of only about 10 fs. While working on his PhD thesis at the Max Born Institute, Martin Galbraith and his coworkers have now pushed the experimental limits to the point where measurements of the extremely fast dynamics in the benzene molecule became technically feasible.

“The development of few-cycle laser pulses and the creation of attosecond pulse trains consisting of only a few bursts allowed us to devise a photochemical experiment with unprecedented time resolution,” says Dr Jochen Mikosch, who headed the scientific effort. Researchers in the division of Professor Marc Vrakking applied a dedicated spectral filter in their experiment, which makes it possible to create a defined superposition of electronic states in the molecule. Extremely short time constants could be measured, which were interpreted in terms of population transfer via two sequential conical intersections. Conical intersections are often described as molecular funnels, where different potential energy surfaces intersect. These are of particular interest since the usually distinct timescales for electronic and nuclear motion become comparable. Conical intersections play a crucial role in biochemical processes such as the stability of DNA with respect to UV light and the first steps of vision in animals and humans. 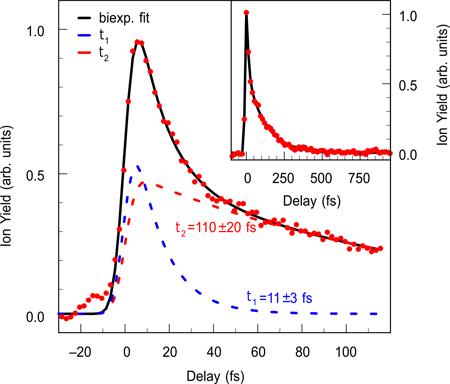 Experimentally measured C4H3+ fragment yield as a function of the pump-probe delay (red dots). The bold black line is a biexponential fit to the data, the dashed lines represent the contributions from two timescales that correspond to crossings of two sequential conical intersections. The inset displays a long range pump-probe scan of C4H3+.

The scientific study published now in Nature Communications results from a collaboration of the MBI researchers with the theoretical groups of Professor Horst Köppel and Alexander Kuleff from the University of Heidelberg. “I am very excited that after so many years of our calculations on the benzene ion being merely a theoretical benchmark, a detailed comparison of theory and experiment is now possible and validates our approach,” says Horst Köppel. The published work includes even more advanced theoretical modelling by Dr Simona Scheit from the group in Heidelberg and shows excellent agreement between theory and computation.

Molecular dynamics near conical intersections play a key role in diverse very active fields of research in modern chemistry. Importantly, the previously inaccessible dynamics within the first few femtoseconds of the photochemical process are often crucial. Hence, Dr Jochen Mikosch from the MBI is optimistic about the future prospects and concludes: “By characterising one of the fastest internal conversion processes studied to date, we enter an extreme regime of ultrafast molecular dynamics, paving the way to tracking and controlling purely electronic dynamics in complex molecules.”