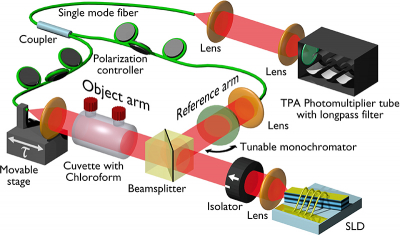 Ghost modalities are by no means “spooky actions” but are metrology schemes exploiting intensity correlations of light based on the fundamentals of quantum optics. The “story” began in 1995 with ghost imaging (GI) using entangled photons—twin photons in the quantum mechanical sense—followed in 2004 by GI with classical correlated photons exhibiting photon bunching and generated by a so-called pseudo-thermal light source. GI is a quantum imaging modality exploiting photon correlations for the image construction, where one photon of an (entangled) pair illuminates the object to be imaged and is detected without any spatial information. Whereas the second, the so-called reference beam, is spatially analysed by scanning it; however, this beam has never seen the object. The experimentally determined correlation between both beams yields the image; therefore, it is called correlated two-photon imaging. The intensity autocorrelation or second order correlation is thus transferred into a spatial image of the object, the ghost image.

In close analogy to these spatial correlations a group at Technische Universität Darmstadt succeeded in transferring this concept into the spectral domain. In a recently published Letter in Physical Review Applied [P. Janassek, S. Blumenstein and W. Elsäßer, “Ghost spectroscopy with classical thermal light emitted by a superluminescent diode”, Phys. Rev. Applied 9, 021001 (2018)] the researchers exploited spectral correlations of broad-band amplified spontaneous emission light emitted by optoelectronic quantum dot superluminescent diodes. With this spectrally photon bunched light, the first ghost spectroscopy (GS) experiment with classical thermal photons was performed. In a real-world ghost spectroscopy experiment on chloroform at 1214 nm the researchers could prove the concept of classical GS. One of two wavelength-correlated beams was shone through a chloroform (CHCl3) sample cell in the object arm, thus measuring the transmitted full, i.e. non-spectrally resolved, intensity. The intensity correlations were determined with a second wavelength-correlated beam, the so-called reference beam in which wavelength resolution was achieved by spectrally tunable filters. The researchers succeeded in reconstructing a ghost spectrum in terms of the second order correlation function g(2)(λ) which clearly exhibited the chloroform absorption signatures at 1214 nm. 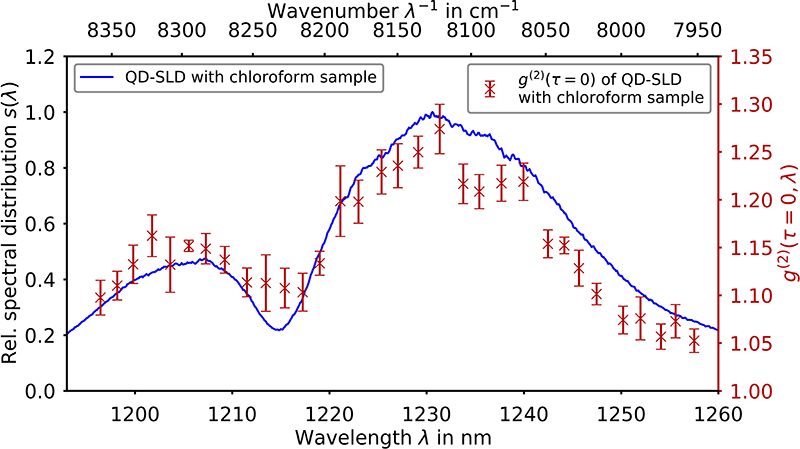 Standard spectrum of the SLD with an absorption line of chloroform (in blue) measured with an optical spectrum analyser and comparison with the second order correlation coefficient g(2)(λ) (red data), the measured “ghost spectrum”.

Professor Wolfgang Elsäßer from TU Darmstadt expects that this demonstration of ghost spectroscopy with classical thermal light will further stimulate new applications of ghost modalities. He said, “I am convinced that the demonstrated and exploited analogy between ghost imaging and ghost spectroscopy will further fertilise the field, thus allowing an even deeper understanding of the experimental scheme to develop, leading to new ghost protocols and pushing the ghost modality idea into real-world applications in Chemistry, Physics and Engineering.”