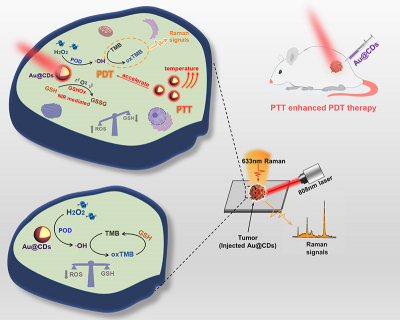 The equilibrium between reducing species and oxidising species within a tumour’s microenvironment (TME) plays a crucial role in the majority of biological processes, especially the apoptotic cell death process. If the balance of oxidising and reducing molecules is broken by the increase of reactive oxygen species (ROS) concentration, cancer cells will die to achieve the purpose of tumour treatment. At present, some new chemodynamic therapy and photodynamic therapy (PDT) methods based on nanozyme catalysis are used in the field of tumour therapy, aiming to achieve the effect of in situ catalytic production of ROS in tumours. However, most of the studies on the mechanism of this treatment still only focus on the results of the cascade catalytic reaction of the nanozyme, and cannot monitor the whole treatment process.

Surface enhanced Raman spectroscopy (SERS) has great potential in monitoring related biochemical reactions in cells. The application of SERS to monitor the photodynamic therapy process of tumours enables further understanding of the specific mechanism of the catalytic process of nanozymes, and obtaining the specific information on the redox state in the TME.

A team of scientists, led by Professor Wei Song, Professor Zhuo Liu and Professor Bing Zhao from Jilin University, China, reported that cascade nanozymes of [email protected] could be used for photodynamic therapy of tumour cells. SERS has been used to identify the dynamic change of ROS in TME throughout the whole PDT process, enabling monitoring of the intracellular biochemical reactions with superior sensitivity. This work presents an insightful study about the PDT mechanism based on oxidative stress injury in TME, providing a powerful means for the real-time monitoring of tumour phototherapy.

The researchers designed the [email protected] cascade nanozyme. In which, CDs are used as a template and capping agent to construct a typical core-shell structure [email protected] nanoparticles (NPs). Compared with the Au NPs alone, the CDs shell avoids the aggregation of Au nuclei and provides a dense and uniform SERS hotspot. Under the excitation of near infrared (NIR) light at 808 nm, [email protected] exhibit NIR light-induced enhanced peroxidase-like (POD) and NIR-light-induced glutathione-like oxidase (GSHOX) activity.

Under the irradiation of NIR light, a large number of hot carriers excited by surface plasmon resonance (SPR) can effectively participate in the reaction, and the typical plasma photothermal effect of Au NPs can enhance the POD activity. In addition, [email protected] mediate glutathione (GSH) to participate in the reaction; which accelerates the generation of ROS and presents the photodynamic treatment effect of photothermal enhancement. This cascade of nanozyme catalytic processes will rapidly break the redox homeostasis in tumours, generate a large amount of ROS and eventually lead to cancer cell apoptosis (Figure 1).

In order to monitor the photodynamic treatment process, SERS is used to monitor the dynamic change of ROS in the tumour microenvironment during photodynamic therapy by recognising the oxidation products of 3,3',5,5'-tetramethylbenzidine (TMB) substrate molecules. Specifically, the enhanced effect of photothermal property under NIR laser irradiation for PDT processes can catalyse the decomposition of H2O2 and the decrease of GSH levels in a very short time, further amplifying the reactive oxygen species damage leading to tumour elimination. Subsequently, the signals of oxTMB decrease over 33 min upon turning off the NIR laser, which is very slow compared to the increase process mentioned above under laser irradiation (3 min) (Figure 2). This result further suggests that overexpressed reductants (such as GSH) in TME will consume over-expressed ROS again, then until the ROS activity is counteracted and eliminated, the oxidation–reduction equilibrium state will be realised again. 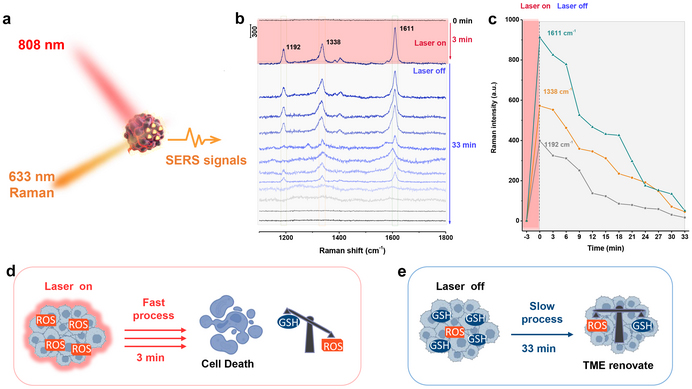 Furthermore, through SERS strategies, a complete oxidative stress process in TMB is obtained, expressing an insightful study about the reaction mechanisms, which provides the most valuable mechanism and data support for the real-time monitoring of tumour phototherapy and normal tissue self-repair.