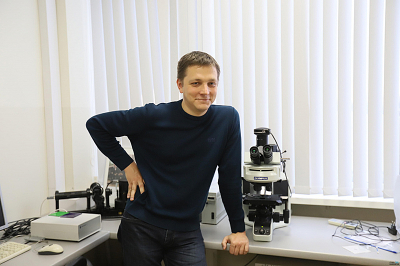 A team of scientists from Immanuel Kant Baltic Federal University have used Raman spectroscopy to study the thrombocytes of patients with cardiovascular diseases and compared their spectra with those of healthy people. The researchers identified useful areas of the spectra and confirmed that Raman spectroscopy is a promising method for diagnosis of the diseases associated with changes in thrombocyte activity and also to forecast the efficiency of antithrombotic therapy. Their results were published in Proc. SPIE.

“Raman spectroscopy is currently being actively studied as a new diagnostic method in many areas of medicine. For example, it can be used to identify the known markers of cardiovascular diseases or to search for new ones. The analysis of thrombocytes and their aggregation ability might become a new efficient and minimally invasive diagnostics method in modern cardiology”, said Ekaterina Moiseeva, a postgraduate of the Institute of Medicine, Immanuel Kant Baltic Federal University.

The team has suggested that the state of thrombocytes in the blood of patients with cardiovascular diseases could be quickly evaluated using surface-enhanced Raman spectroscopy (SERS). The participants of the study were volunteers; some of them had healthy hearts and blood vessels, and some suffered from high blood pressure or had survived a heart attack and took anti-aggregants (blood thinners). Samples of venous blood were taken from both groups. After that, thrombocytes were extracted and placed on a base plate. Then the scientists measured the spectra of single suspended cells and studied their characteristics. The comparison of samples taken from healthy people and cardiovascular patients showed differences in several areas of the spectra. Namely, the intensity of the signal changed in the latter which may indicate changes in the physical characteristics of the lipidic base of thrombocyte membranes.

“It is too early to say that the spectra change according to a certain set of rules. We need further studies to classify them and link to specific cell processes. To confirm the results, we plan to collect more research statistics and to identify spectral patterns that might be brought into correlation with the thrombocyte state indicators”, said Andrei Zyubin.

The results of the study confirmed that Raman spectroscopy could be used to study the changes in the properties of thrombocytes in patients undergoing anti-aggregant therapy. This would help doctors not only control the progress of the therapy, but also identify possible risks of cardiovascular diseases.