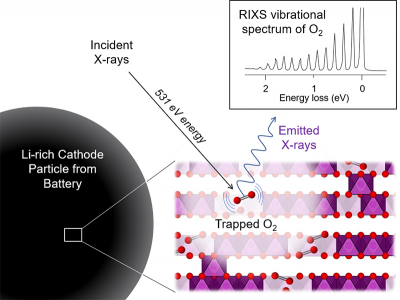 A collaborative team of researchers has been able to fully identify the nature of oxidised oxygen in the important battery material, Li-rich NMC, using Resonant Inelastic X-ray Scattering (RIXS) and 17O magic angle spinning (MAS) nuclear magnetic resonance (NMR) spectroscopies. This compound is being closely considered for implementation in next generation Li-ion batteries because it can deliver a higher energy density than the current state-of-the-art materials, which could translate to longer driving ranges for electric vehicles. The team expect that their work will enable scientists to tackle issues like battery longevity and voltage fade with Li-rich materials.

The paper, published in Nature Energy, and written by a joint team from the University of Oxford, the Henry Royce and Faraday Institutions and Diamond Light Source examines the results of their investigations to better understand the important compound known in the battery industry as Li-rich NMC (or Li1.2Ni0.13Co0.13Mn0.54O2).

Principal Beamline Scientist on I21 RIXS at Diamond, Kejin Zhou, explains: “Our work is much about understanding the mysterious first cycle voltage hysteresis in which the O-redox process cannot be fully recovered resulting in the loss of the voltage hence the energy density.”

A previous study into this process made by the same research team, at the I21 beamline at Diamond, reported that, in Na-ion battery cathodes, the voltage hysteresis is related to the formation of molecular O2 trapped inside of the particles due to the migration of transition metal ions during the charging process.

He adds: “Our current work, focuses on the Li-rich material Li1.2Ni0.13Co0.13Mn0.54O2. The key findings as before show the formation of free O2 molecules inside the materials, which has not been appreciated before in the community. This is a very important discovery as the material has higher  transition metal (TM)-O covalency which was thought to suppress formation of molecular O2. I believe our work will have huge impact in future battery cathodes designs to minimise the unstable honeycomb structure. Our work also has important consequences for tackling other issues associated with Li-rich NMC, such as voltage fade, which hinder their commercialisation and ultimately discovering new materials which may be able to harness O-redox more reversibly.”

Li-rich cathode materials are one of the very few options available to increase the energy density of Li-ion batteries. Almost all of the lithium in these structures can be removed, compensated first by oxidation of the TM ions and subsequently the oxide ions. However, the high voltage associated with this O-redox process on charge is not recovered on discharge leading to so-called voltage hysteresis and a substantial loss of energy density. This represents one of the key challenges that has inhibited exploiting the full potential of these materials and the understanding of this phenomenon remains incomplete.

“In our study, we used high resolution-resonant inelastic X-ray scattering (HR-RIXS) spectroscopy at beamline I21 at Diamond to investigate the O-redox process. This is how the material stores charge on the oxide ions, which make up part of its structure. However, this process has proved very difficult for researchers to understand fully. The material undergoes complicated structural changes during the first charge resulting in large voltage hysteresis, and the mechanism by which oxide ions store energy was unclear”, explains lead author, Dr Rob House, University of Oxford, Department of Materials. He also adds:

“The data we achieved allowed us to assign mysterious spectroscopic features that had previously been detected by the RIXS technique, but could not be fully identified. We were able to resolve fine structure arising from the vibrations of O2 molecules allowing us to assign the RIXS features obtained in this important class of battery material. These O2 molecules are trapped within the bulk of the cathode material and can be reformed back into oxide ions during discharge, but at a lower voltage than on the initial charge. This provides a new mechanism for explaining the O-redox process and represents an important step forward for battery materials.”