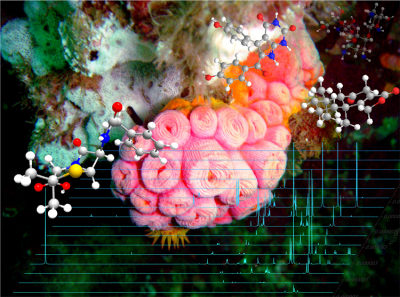 New research at Griffith University has streamlined the process of identifying the structure and molecular weight of compounds, which could have positive implications for scientists working in the fields of drug discovery, pollution analysis, food security and more. The research team has developed a novel nuclear magnetic resonance (NMR) method using diffusion ordered NMR spectroscopy (DOSY) to assign the molecular weight of compounds in mixtures. The research, led by Professor Anthony Carroll from Griffith’s School of Environment and Science and Griffith Institute for Drug Discovery with PhD graduate Guy Kleks and PhD candidates Darren Holland and Joshua Porter, is a breakthrough for scientists working on organic molecules.

“Currently you need two orthogonal techniques, mass spectrometry and NMR spectroscopy, to work out the molecular structure of a compound”, Professor Carroll said. “We’ve now condensed that into only needing one technique to work out the structure of the molecule. But if you don’t know the compound’s molecular weight, then using NMR techniques gets you a certain distance towards identifying what the structure of a molecule is but doesn’t get you all the way. Up until now this molecular weight was determined using mass spectrometry”, Professor Carroll said.

Professor Carroll and his team have now developed an NMR method that can predict the molecular weight of the compound. This “all in one” method now means that the molecular structure can be confirmed more quickly so that the compound can be used for further developments.

“What we’ve developed is actually a quick diagnostic tool that can help a whole range of areas including health and the environment”, Professor Carroll said. “Previously, it was like trying to find a needle in a haystack where one molecule out of a complex mixture was responsible for the effect that we see in, for example, cancer cells. That process generally requires us to do a whole lot of separation of molecules, which means a lot of time involved in doing purification and identification. What we’ve developed is a technique where we can look directly at a complex mixture and identify the individual molecules within it.”