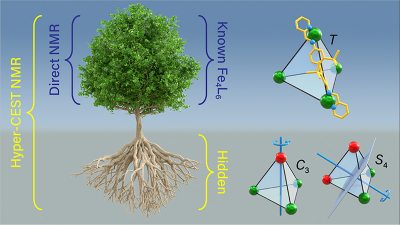 The concept of a modular construction system proves useful in many applications for assembling complex structures for specific functions from individual, repeated sub-units. In chemistry, the principle can be used to construct a self-assembling network from smaller molecular units that acts as a transport container of a defined size. For example, several metal ions can be linked with organic molecules. These MOPs (metal–organic polyhedra) are used, for instance, to capture greenhouse gases or to pave the way for more effective chemotherapeutic agents by loading them with certain drugs, which they then release in the tumour. Several aspects of the behaviour of these structures have not yet been adequately explored. This is partly because there are not always appropriate techniques available to observe the loading and unloading of these MOPs at the molecular level—often, no differences can be measured between the empty and loaded variants for either the container or its contents.

In cooperation with a team from the University of Oulu in Finland, Leif Schröder’s research group from the Leibniz-Forschungsinstitut für Molekulare Pharmakologie (FMP) and the Deutsches Krebsforschungszentrum (DKFZ) has now investigated MOPs that spontaneously assemble in solution from iron ions and an organic compound to form tetrahedra. In the process, the organic struts can be attached differently to the iron “nodes”. Essentially, this influences the properties of MOPs, such as their capacity to kill tumour cells. In the case of the MOP under study, however, it was previously thought that only one of the three theoretically predicted variants existed. The other two variants were considered too unstable, because no analytical methods were able to detect them. Using a new method of magnetic resonance (hyper-CEST NMR), Schröder’s team member Jabadurai Jayapaul has now succeeded in demonstrating that these previously unknown variants do exist. The colleagues from Finland were able to confirm the signals of these “hidden” MOPs using theoretical calculations. Although they only occur in very small proportions, the measurements showed that altering the attachment of struts causes dramatic changes in the loading and unloading of containers. Certain sub-types of containers can be selected to speed up the process. The researchers are now using this knowledge to develop a novel type of contrast agent in MR imaging in which the loading of the container influences the MRI signal. But observations also show that there is greater potential for new insights for further optimising drug carriers. In other words, the first impression gained of these structures may not always be the right one. A substantial part of their nature may remain hidden until we are able to detect them using far more sensitive methods.