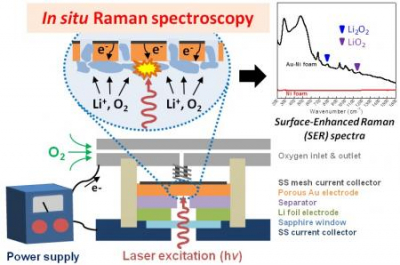 Raman spectroscopy helps lithium-air batteries live up to their promise: we could one day be driving electric cars 500 miles or more without recharging, or using laptops for weeks without having to plug in. They could also replace lithium-ion batteries, currently the standard in many consumer electronics.

But their chemistry has proven frustratingly hard to understand, and researchers need to learn more before the batteries can break out of the lab and onto the market. Researchers from Yale and MIT believe that Raman spectroscopy could answer many of the questions that remain about the batteries, also known as lithium-oxygen or Li-O2. Their work has been published in ChemElectroChem.

“Lithium-oxygen is quite superior to lithium-ion batteries, at least in theory,” said lead author Forrest S. Gittleson, a post-doctoral associate at Yale in Chemical & Environmental Engineering. “It can store at least two to three times the energy that you can store in lithium-ion.”

For a battery to be rechargeable, though, the changes that convert chemical energy to electrical energy must be efficiently reversible. Among other obstacles, lithium-oxygen systems have not yet demonstrated high-energy reversible cycling, so recharging is a problem. Before they can solve this, researchers need to learn more about its mechanisms.

“This is an extremely new technology, and not all of its chemistry is very well understood,” Gittleson said.

Partly because it allows for real time, in situ analysis, the researchers say that Raman spectroscopy might be the best tool to do this, providing a comprehensive look at the electrochemical processes in the systems of lithium-air batteries. In a study published last year, the authors observed the production of reversible lithium superoxide, but also some side products that could hinder charging. The use of Raman spectroscopy in situ allows researchers to directly observe the formation and decomposition pathways, and gain insight into lithium-oxygen chemical mechanisms.

“It’s certainly promising for advancing the science,” Gittleson said. “And it’s particularly promising that you can discern the specific species with confidence.”