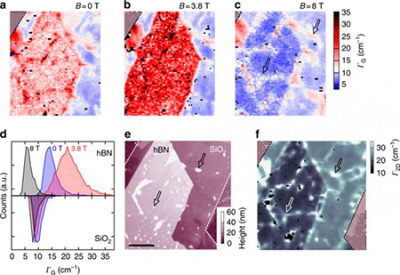 Using Raman spectroscopy and statistical analysis, an international group of scientists has succeeded in taking nanoscale measurements of the strain present at each pixel on the surface of graphene. The researchers also obtained a high-resolution view of the chemical properties of the graphene surface.

The results, says Slava V. Rotkin, professor of physics and also of materials science and engineering at Lehigh University, could potentially enable scientists to monitor levels of strain quickly and accurately as graphene is being fabricated. This in turn could help prevent the formation of defects that are caused by strain.

“Scientists already knew that Raman spectroscopy could obtain implicitly useful information about strain in graphene”, says Rotkin. “We showed explicitly that you can map the strain and gather information about its effects. Moreover, using statistical analysis, we showed that it is possible to learn more about the distribution of strain inside each pixel, how quickly the levels of strain are changing and the effect of this change on the electronic and elastic properties of the graphene.”

The group reported its results in Nature Communications in an article titled “Raman spectroscopy as probe of nanometer-scale strain variations in graphene”. In addition to Rotkin, the article was authored by researchers from RWTH/Aachen University and the Jülich Research Centre in Germany; the Université Paris in France; Universidade Federal Fluminense in Brazil; and the National Institute for Materials Science in Japan.

Several obstacles are holding up further commercialisation of graphene. One of these is the presence of defects that impose strain on graphene’s lattice structure and adversely affects its electronic and optical properties. Related to this is the difficulty in producing high-quality graphene at low cost and in large quantities.

“Graphene is stable and flexible and can expand without breaking”, says Rotkin. “But it has wrinkles, or bubbles, on its surface, which give the surface a hilly feel and interfere with potential applications.”

A layer of graphene is typically made on a substrate of silicon dioxide by chemical vapour deposition. The material can be strained by contamination that occurs during the process or because the graphene and the substrate have different thermal expansion coefficients and thus cool and shrink at different rates.

The typical spatial resolution of the Raman map of graphene is about 500 nm, or the width of the laser spot. This resolution makes it possible to measure variations in strain on a micrometre scale and determine the average amount of strain imposed on the graphene. By performing a statistical analysis of the Raman signal, however, the group reported that it was able to measure the strain at each pixel and to map the strain, and the variations in strain, one pixel at a time.

Thus, the group reported, it was able to “distinguish between strain variations on a micrometer scale, which can be extracted from spatially resolved Raman maps, and nanometer-scale strain variations, which are on sub-spot-size length scales and cannot be directly observed by Raman imaging, but are considered as important sources of scattering for electronic transport”.