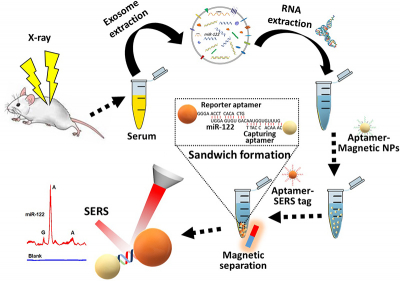 Recently, the team led by Prof. Huang Qing at the Institute of Intelligent Machines, Hefei Institutes of Physical Science (HFIPS) has developed a novel biosensor based on aptamer-combined surface-enhanced Raman spectroscopy (SERS) to detect inflammatory microRNA-122 (miR-122) in cell-secreted exosomes.

In this research, a label-free SERS-sandwich assay was developed to detect and evaluate a special exosomal miRNA, namely, miR-122, by combining aptamer-modified SERS tags and a magnetic nanoparticle (NP)-based miRNA capturing element. The SERS tags were composed of a thiolated aptamer, modified with additional G bases at the 3′ end, which was functionalised on Au shell NPs via Au–S bonds. The capturing element was prepared by anchoring a thiolated aptamer on magnetic NPs. For the recognition of target miRNA, the magnetic capturing element was initially exposed to the target, which captured the miRNA sequences via immunoreaction between recognition and target sequences. The NPs were separated using an external magnetic field, rinsed and probed with SERS tags (see illustration). As a result, the target sequence was captured via sandwich formation. The enhanced Raman signal of the adenine base at the 3′ end of the SERS tag was used to calibrate the output.

This research utilised aptamer-combined SERS methodology to detect miRNA as the biomarker to evaluate radiation-induced organ injury. Another advantage of this method is the use of magnetic NPs. It can provide the additional facility of rapid and ready separation of analytes using an external magnetic field. This method is also applicable to evaluate the drug triggered liver inflammation via examining the exosomal miRNA as the biomarker. In general, this method could provide easy and early diagnosis for analysing hepatic inflammation cases at the clinical level.