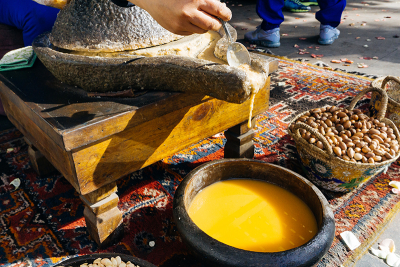 Researchers from the Quadram Institute have developed a new way to test the authenticity of argan oil, one of the world’s most expensive edible oils. In recent years, it has become sought after as an ingredient in cosmetics and health products, significantly increasing its value. Using a benchtop NMR spectrometer developed by Oxford Instruments, the method can screen for quality and authenticity, detecting when argan oil has been mixed with cheaper alternatives. A screen of 28 commercially available products labelled as 100 % argan oil found four that were not pure argan, strongly indicating adulteration with other oils. With demand for argan oil soaring, this new method can help protect consumers from fraud, and support honest producers and suppliers.

Argan oil is made from the kernels of the argan tree, which grows exclusively in Morocco, and is recognised as a Protected Geographical Indication product. It is traditionally produced by hand and used both as a medicine, particularly for skin conditions, and as part of the diet, where it also is reputed to provide health benefits. Scientific validation of its health claims is patchy, but like olive oil it can be a key component of a healthy Mediterranean style diet. It is rich in fatty acids, polyphenols and other components that have been linked to reductions in chronic health conditions.

More recently, there has been an explosion in demand driven by the cosmetics industry, keen to include it as an ingredient in hand creams, haircare products and cosmetics. Mechanical presses have replaced hand extraction, but the trees themselves are slow growing, so demand remains high, as does the price. The market is estimated to reach over $500 million by 2027, so it’s no wonder it’s known colloquially as Moroccan liquid gold.

All of this makes argan oil an attractive target for fraudsters who can substitute cheap vegetable oils for argan oil, which costs around $30 per litre. Because it is used as an ingredient in cosmetics, the consumer, and even the manufacturer, may not notice the difference. Dr Kate Kemsley and her team from the Quadram Institute, working with Oxford Instruments, have developed a new way of authenticating argan oil that is quick, high throughput and robust. The method uses a benchtop NMR spectrometer to measure the profile of different mono-unsaturated (MUFA), poly-unsaturated (PUFA) and saturated fatty acids (SFAs). Through a collaboration with the Centre National de l’Energie des Sciences et des Techniques Nucléaires (CNESTEN) in Rabat, Morocco, the researchers obtained samples of argan oil with known provenance. Samples came from different regions and were taken at different times, to allow the researchers to get a view of the natural variation in the fatty acid profiles.

Samples of argan oil deliberately mixed with sunflower oil at different ratios were also tested, and these could be distinguished from 100 % argan oil. The researchers also tested a range of different vegetable oils. Most could be distinguished, but some, for example bran oil, looked very similar based on their MUFA, PUFA and SFA profiles. Whilst these compounds make up the major part by weight of these oils, there are a range of other minor compounds present including phenolics, tocopherols, and free fatty acids. Using bespoke computational techniques to incorporate this information from the whole spectrum allowed them to identify 15 different types of oil as different to argan oil.

The test only takes 5 minutes and requires no sample preparation or solvents. It doesn’t need to be run in a laboratory and requires no particular expertise to perform, making it suitable for in situ testing. It provides a clear decision and gives information with an accuracy and precision suitable for “typical value” food labelling. The research was funded by the Biotechnology and Biological Sciences Research Council (BBSRC), part of UKRI, with support from Oxford Instruments and the Food and Agriculture Organisation of the United Nations.

In a survey of commercially available oils, the researchers bought 28 different products labelled as 100 % argan. Four of these failed the authentication test, most probably due to adulteration with other vegetable oils. This shows that there is already argan oil fraud taking place. With demand for argan oil showing no signs of fading, this new method should give retailers and manufacturers a new tool to help ensure that the products they supply to consumers are what they say they are.

Details of the research have been published in Magnetic Resonance in Chemistry.