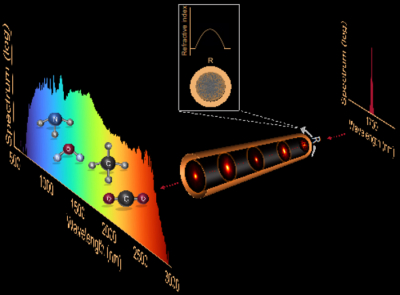 When a high-power ultrashort pulse of light interacts with a material such as a glass optical fibre, a range of highly non-linear interactions take place that cause complex changes in both the temporal and spectral properties of the injected light. When taken to the extreme, such interactions can lead to the generation of a rainbow laser of light commonly referred to as a supercontinuum light source. Since its first demonstration in a special type of optical fibre in 2000, supercontinuum laser light has revolutionised many areas of science, ranging from metrology and imaging at unprecedented resolution to ultrabroadband remote sensing and even the detection of exoplanets.

The current bottleneck with current supercontinuum sources, however, is that they are based on optical fibres that support a single transverse intensity profile or mode, which inherently limits their optical power. What’s more, conventional optical fibres are made of silica glass with transmission limited to the visible and near infrared region of the spectrum. Extension of supercontinuum light to other wavelength regimes such the mid-infrared requires optical fibres made of so-called soft glasses, but these possess a lower damage threshold than silica, limiting even more the power of the supercontinuum beam.

Recently, a different type of optical fibre with a refractive index that varies continuously across the fibre structure has been shown to yield a dramatic increase in supercontinuum power, while still preserving a smooth beam intensity profile. “The refractive index variation of such graded-index optical fibres leads to periodic focusing and defocusing of the light inside the fibre that enables coupling between spatial and temporal non-linear light–matter interactions. This leads to a self-cleaning mechanism that yields supercontinuum light with high power and a clean beam profile. As well as their many applications, they also provide a means of studying fundamental physics effects such as wave turbulence,” says Professor Goëry Genty, the leader of the research group at Tampere University.

While these fibres have recently attracted significant attention from the research community, their use has been, up to now, restricted to the visible and near infrared. In collaboration with the group of Profs Buczynski and Klimczak at the University of Warsaw (Poland) and the group of Prof. Dudley in the University of Burgundy France-Comté (France), the Tampere team demonstrated for the first time the generation of a two-octave supercontinuum from the visible to mid-infrared in a non-silica graded-index fibre with a self-cleaned beam.

“This problem has now been solved by using a particular design that utilises two types of lead–bismuth–gallate glass rods with different refractive indices drawn to yield a nanostructured core. The result is a graded-index fibre with an effective parabolic refractive index profile with transmission up to the mid-infrared, and, as cherry on the cake, enhanced non-linear light–matter interactions”, says researcher Zahra Eslami.

The mid-infrared is of crucial interest as it contains the characteristic vibrational transitions of many important molecules.

The researchers anticipate that this novel type of fibre will very soon become an important and standard material for the generation of broadband sources and frequency combs.

The research was carried out at Tampere University and within the Academy of Finland Flagship for Photonics Research and Innovation (PREIN).