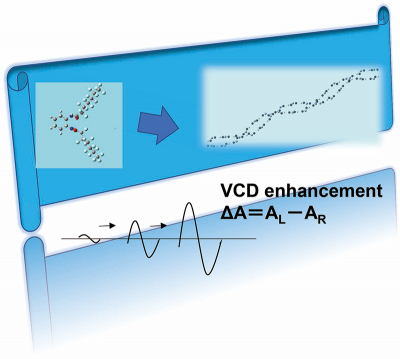 Vibrational circular dichroism (VCD) spectroscopy is an extension of circular dichroism spectroscopy into the infrared (IR) and near infrared regions where vibrational transitions occur in the ground electronic state of a molecule. The method offers the advantage of studying the chiroptical properties of a wide range of molecules in non-crystalline states. However, due to the weakness of the signals, one measurement requires several hours to yield reliable results. Accordingly, its target has been limited to a stable molecule in a solution. To overcome this difficulty, a group at Ehime University applied the VCD method to supramolecular systems. Their results are reported in Physical Chemistry Chemical Physics.

Solid state and time-step VCD methods were developed to determine the mechanism of chirality amplification from the microscopic to supramolecular scales. The VCD signals were enhanced in the following three cases: (i) chiral gels with hundreds of molecules arranged in stereoregularity, (ii) chiral metal complexes with low-lying excited states in the IR region and (iii) a molecular pair interacting stereo-selectively on a solid surface. Finally, we described an on-going project involving the construction of a multi-dimensional VCD system.