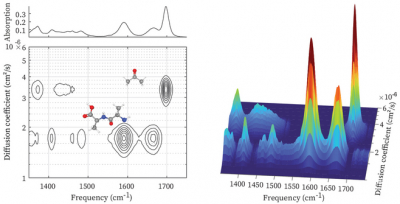 Researchers at the University of Amsterdam have developed a novel approach to infrared spectroscopy that enables simultaneous characterisation of molecular structure and size. Called Infrared Diffusion-Ordered Spectroscopy (IR-DOSY), the method nicely separates molecules with different sizes into distinct sets of infrared (IR) peaks. The researchers foresee analytical applications in fields as diverse as proteins, polymers, pharmaceuticals and biomedicine. They are currently developing a first version of a practical chemical probe implementing the IR-DOSY concept.

Infrared spectroscopy is an important workhorse in the analysis of chemical compounds. It helps to identify molecules based on their functional groups and spatial conformation. In general, IR spectroscopy is not sensitive to the size of the molecules. Inspired by an already existing approach in NMR spectroscopy, the Amsterdam researchers now applied the principle of diffusion ordered spectroscopy to IR. Here, the molecules present in a sample are separated based on their diffusion behaviour prior to spectral analysis. IR-DOSY relies on the fact that the diffusion of a molecule is determined completely by its size—a concept that was first established by Albert Einstein in his 1905 classic paper on the Brownian motion of microscopic particles.

The IR-DOSY spectrometer creates a spatially inhomogeneous distribution of solute molecules using a simple yet effective flow method that transports both the mixture and pure solvent into a sample chamber. After the stopping the flow, the solute molecules start to diffuse into the pure solvent region, at a rate that depends on their diffusion coefficient. The IR absorption is measured at a position in the chamber where there was initially only solvent. As time progresses, the diffusing solute molecules start appearing in the IR beam. In this way, for all type of molecules the individual IR spectra are recorded at different moments in time, depending on their sizes. IR-DOSY thus produces a two-dimensional spectrum with the IR frequency along one axis and the diffusion constant (or equivalently, the size) along the other axis.

The researchers argue that although the separating power of IR-DOSY is less than that of typical chromatographic methods, it has the advantage that no prior knowledge is required of the chemical structure of the compounds present in the sample. The separating power might even be increased by adding an electrophoresis device to actively separate the species in the sample solution.

Among the anticipated applications are the analysis of protein aggregates and fibrils. Here, IR-DOSY makes it possible to simultaneously investigate monomers, oligomers and fibrils, which typically coexist in a sample. Polymers and plastic nanoparticles constitute another interesting field of research since samples usually contain many different molecules of many sizes. The size-selectivity and structure-sensitivity could also render IR-DOSY useful in the pharmaceutical and biomedical domains. For instance, it has potential to detect trace amounts of small molecules present in pharmaceutical products.

In the biomedical context, it could for instance be used to detect and structurally characterise low-molecular weight species in human blood serum. In all cases, the IR-DOSY analysis provides valuable information about the size or size distribution of the molecules or molecular aggregates in a sample.

The IR-DOSY method was developed in a joint effort of the university’s Institute of Physics and the Van ‘t Hoff Institute for Molecular Sciences. At the latter, Professor Sander Woutersen and Dr Giulia Giubertoni, in collaboration with Dr Saer Samanipour, are now further developing the method into a cost-effective device that can be used by researchers from different disciplines in any laboratory as an analytical or diagnostic tool. For this they were recently awarded a €160,000 “Demonstrator Grant” by the Dutch Research Council NWO. Development of the probe is a joint effort in cooperation with the university’s Technology Centre, the technology transfer office IXA and Demonstrator Lab Science Park.