Of mouse teeth and mammoth tusks 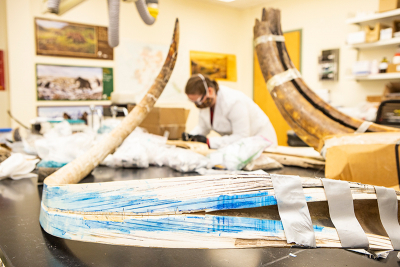 Scientists gathered unprecedented details of the life of an Arctic woolly mammoth through analysis of a 17,000-year-old fossil from the University of Alaska Museum of the North. They used laser ablation multi-collector ICP-MS to analyse isotopic data in the mammoth’s tusk, and were able to match its movements and diet with isotopic maps of the region. Few details have been known about the lives and movements of woolly mammoths, and the study offers the first evidence that they travelled vast distances.

“It’s not clear-cut if it was a seasonal migrator, but it covered some serious ground”, said University of Alaska Fairbanks researcher Matthew Wooller. “It visited many parts of Alaska at some point during its lifetime, which is pretty amazing when you think about how big that area is.”

Researchers at the Alaska Stable Isotope Facility, where Wooller is director, split the 6-foot tusk lengthwise and generated about 400,000 microscopic data points with laser ablation ICP-MS. The detailed isotope analyses they made are possible because of the way that mammoth tusks grew. Mammoths steadily added new layers on a daily basis throughout their lives. When the tusk was split lengthwise for sampling, these growth bands looked like stacked ice cream cones, offering a chronological record of an entire mammoth’s life.

Scientists knew that the mammoth died on Alaska’s North Slope above the Arctic Circle, where its remains were excavated by a team that included UAF’s Dan Mann and Pam Groves, who are among the co-authors of the study. 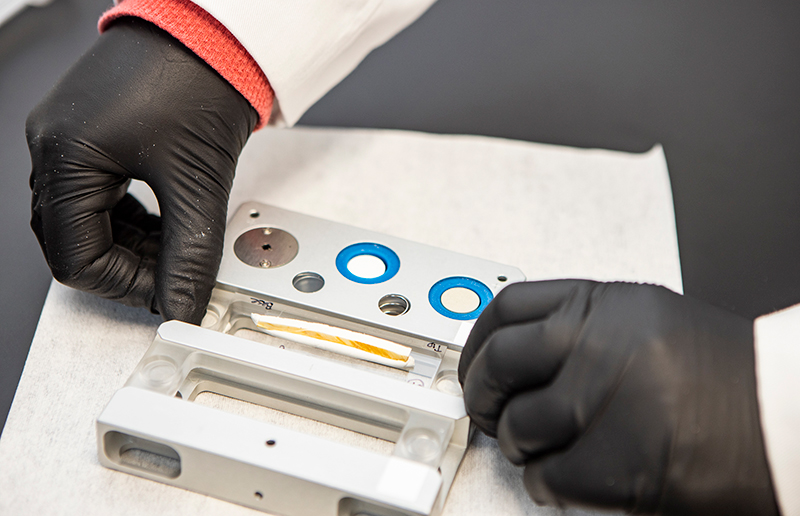 A close-up segment of a tusk ready for strontium isotope analysis at the Alaska Stable Isotope Facility. Photo by J.R. Ancheta, University of Alaska Fairbanks

Researchers pieced together the mammoth’s journey up to that point by analysing isotopic signatures in its tusk from the elements strontium and oxygen, which were matched with maps predicting isotope variations across Alaska. Researchers created the maps by analysing the teeth of hundreds of small rodents from across Alaska held in the museum’s collections. The animals travel relatively small distances during their lifetimes and represent local isotope signals.

Using that local dataset, they mapped isotope variation across Alaska, providing a baseline to trace the mammoth movements. After taking geographic barriers into account and the average distance it travelled each week, researchers used a novel spatial modelling approach to chart the likely routes the animal took during its life.

Ancient DNA preserved in the mammoth’s remains allowed the team to identify it as a male that was related to the last group of its species that lived in mainland Alaska. Those details provided more insight into the animal’s life and behaviour, said Beth Shapiro, who led the DNA component of the study.

For example, an abrupt shift in its isotopic signature, ecology and movement at about age 15 probably coincided with the mammoth being kicked out of its herd, mirroring a pattern seen in some modern-day male elephants.

“Knowing that he was male provided a better biological context in which we could interpret the isotopic data”, said Shapiro, a professor at the University of California Santa Cruz and investigator at the Howard Hughes Medical Institute.

Isotopes also offered a clue about what led to the animal’s demise. Nitrogen isotopes spiked during the final winter of its life, a signal that can be a hallmark of starvation in mammals.

“It’s just amazing what we were able to see and do with this data”, said co-lead author Clement Bataille, a researcher from the University of Ottawa who led the modelling effort in collaboration with Amy Willis at the University of Washington.

Discovering more about the lives of extinct species satisfies more than curiosity, said Wooller. Those details could be surprisingly relevant today as many species adapt their movement patterns and ranges with the shifting climate.

“The Arctic is seeing a lot of changes now, and we can use the past to see how the future may play out for species today and in the future”, Wooller said. “Trying to solve this detective story is an example of how our planet and ecosystems react in the face of environmental change.”