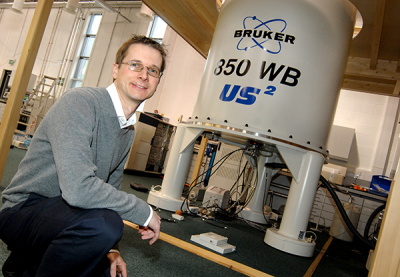 Professor Steven P. Brown from the Department of Physics at the University of Warwick, with colleagues in the Department of Chemistry, have identified that the supramolecular structure of a guanosine derivative can be different upon passing from the solid state into the solution state and vice versa. This defies chemical precedent, as self-assembled structures driven by the formation of specific intermolecular hydrogen bonds in solution would be expected to remain the same in the solid state. The phenomenon was revealed by the state-of-the-art nuclear magnetic resonance (NMR) facility at Warwick (see recent column in Spectroscopy Europe).

In the solution state, the guanosine derivative analysed by the researchers is constituted by quartet-like molecular structure—and scientific intuition would suggest that this should remain like this in the solid state. However, upon changing into the solid state, the supramolecular assembly surprisingly contains both quartet and ribbon structures.

Using NMR spectroscopy, Professor Brown and his colleagues identified the distinct supramolecular states by spotting varying peaks in spectra that identify close approach of these magnetic nuclei in atoms.

Professor Brown comments: “Access to state-of-the-art NMR infrastructure has enabled us to see with chemical precision how the guanosine-based molecules self-assemble, thus revealing the surprising phenomenon of a change in self-assembly upon going changing from solution to solid and from solid to solution.”

The University of Warwick’s national solid-state NMR facility is directed by Professor Brown and a Facility Executive with scientists from four other UK universities—and was officially launched in 2010. The facility and this research is funded by the Engineering and Physical Sciences Research Council.

The research has been published in Chemistry: A European Journal.