Lattice of nanotraps and line narrowing in Raman gas 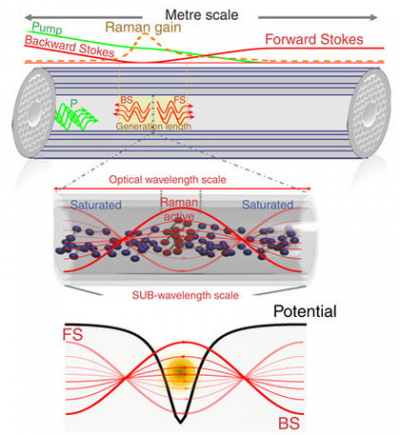 Decreasing the emission linewidth from a molecule is one of the key aims in precision spectroscopy. One approach is based on cooling molecules to near absolute zero. An alternative way is to localise the molecules on the sub-wavelength scale. A novel approach in this direction uses a standing wave in a gas-filled hollow fibre. It creates an array of deep, nanometre-scale traps for Raman-active molecules, resulting in linewidth narrowing by a factor of 10,000.

The radiation emitted by atoms and molecules is usually spectrally broadened due to the motion of the emitters, which results in the Doppler effect. Overcoming this broadening is a difficult task, in particular for molecules. One possibility to overcome the molecular motion is by building deep potential traps with small dimensions. Previously, this was done, for example, by arranging several counter-propagating beams in a complicated setup, with limited success.

In a cooperation effort between the Max Born Institute and Xlim Institute in Limoges, researchers show that sub-wavelength localisation and line narrowing is possible in a very simple arrangement due to self-organisation of Raman gas (molecular hydrogen) in a hollow photonic crystal fibre. Due to Raman scattering, the continuous-wave pump light transforms into the so-called Stokes sideband, which travels back and forth in the fibre due to reflections from fibre ends and forms a stationary interference pattern—a standing wave with interchanging regions of high and low field (see Figure). In the high-field regions, the Raman transition is saturated and is not active, and the molecules have high potential energy since they are partially in the excited state. In the low-field region, the molecules are Raman-active, and they have low potential energy since they are close to the ground state. These low-field regions form an array of roughly 40,000 narrow, strong traps, which contain localised Raman-active molecules. The size of these traps is around 100 nm, which is much smaller than the light wavelength of 1130 nm. Therefore, the emitted Stokes sidebands have a very narrow spectral width of only 15 kHz—this is 10,000 times narrower than the Doppler-broadened sidebands for the same conditions. Details of this work have been published in Nature Communications.

The self-organisation of the gas manifests also on the macroscopic scale. First, the calculations show that the Raman process mainly happens exactly in the fibre section where the standing wave is formed, as shown in the top panel of the Figure. Second, the macroscopic gradient of the potential leads to the gas flow towards the fibre end, which is observed by eye in the experiment. This strong localisation and the linewidth narrowing have various uses, e.g. in spectroscopy. However, it can also be used as well as a method to periodically modulate the density of the gas, which is naturally suited for developing quasi-phase-matching schemes for other non-linear processes, such as effective generation of high harmonics.