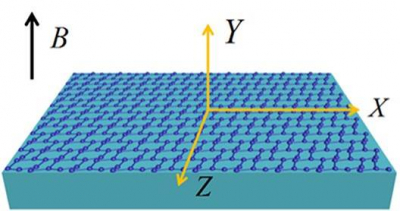 Optical activity in chiral molecules has become a hot topic in physics and optics, representing the ability to manipulate the polarised state of light. Understanding how molecules rotate the plane of plane-polarised light has widespread applications, from analytical chemistry to biology and medicine. A new study published in The European Physical Journal B by Chengping Yin of the Guangdong Provincial Key Laboratory of Quantum Engineering and Quantum Materials, South China, aims to derive an analytical model of optical activity in black phosphorous under an external magnetic field.

Yin and his fellow authors experimented with black phosphorous — a thermodynamically stable form of phosphorus at room temperature and pressure, first synthesised in 1914 — in a single, closely packed layer of atoms or a monolayer. The researchers discovered that in addition to expected strong optical activity, dichroism  and circular birefringence, they could tune the phenomena created by altering the applied magnetic field.

The team reached their findings by deriving an analytical method to calculate the optical activity in a monolayer of black phosphorous under an external magnetic field. They were then able to obtain results showing how optical activity can be altered by changing the incident angle of the impinging light and by adjusting the magnitude of the applied magnetic field. The results discussed in the paper show optical activity conforming to that previously observed in chiral metamaterials — material engineered to have a property that is not found in naturally occurring materials. In addition to this, they found the co-polarisation transmittance increased in step with the angular frequency. The team explains the reason for this is that the conductivity of the monolayer black phosphorous decreases with increasing angular frequency, resulting in a weaker interaction with the incident light.

The researchers say that their findings could have applications in polarisation optics, stereochemistry  and molecular biology.