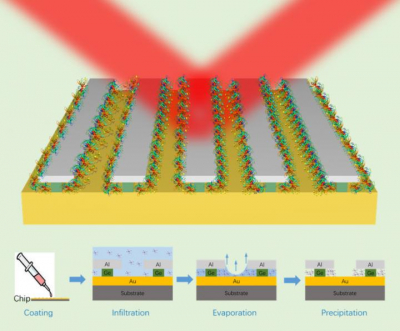 In a paper published in Light: Science & Applications, a team of scientists, led by Dr Peter Q. Liu from the State University of New York at Buffalo, have demonstrated a new type of high-performance optical sensor which can utilise the surface tension of liquid to concentrate and trap analyte molecules at the most sensitive locations of the device structure, and hence significantly enhance the sensitivity performance. Based on a metal-insulator-metal sandwich structure which also features nanometre scale trenches, the sensor can passively retain and concentrate an analyte solution in these trenches as the solution gradually evaporates on the sensor surface, and eventually trap the precipitated analyte molecules inside these trenches. As the light intensity is also highly enhanced in these trenches by design, the interaction between light and the trapped analyte molecules is drastically enhanced, leading to a readily detectable optical signal (i.e. changes in the light absorption spectrum) even at the picogram level.

In general, the absorption of infrared light is intrinsically weak, optical sensors can drastically enhance the molecular absorption by employing suitable nanostructures on the device surface to confine light into very small volumes (so called hot-spots), which leads to very large light intensity. In doing so, each molecule in the hot-spots can absorb much more light in a given time interval than a molecule outside the hot-spots, which makes it possible to measure very low quantity of chemical or biological substances with high reliability, if enough molecules are located in the hot-spots. This general approach is also called surface enhanced infrared absorption (SEIRA).

“There are techniques, such as optical tweezers and dielectrophoresis, which can manipulate small particles or even molecules and deliver them to target locations such as the hot-spots. However, these techniques require significant amount of energy input and are also complicated to utilise.” Dr Liu added, “what we set out to explore is a device structure that can trap analyte molecules precipitated out of a solution into the hot-spots in a passive (requiring no energy input) and effective way, and we realised that we can make use of the surface tension of liquid to achieve this goal.”

In addition to the demonstration of high-sensitivity biomolecule sensing, the team also conducted another set of experiments, which showed that the same type of device structure also achieved effective trapping of liposome particles (typically ~100 nm) in the tiny trenches. This means such optical sensors can be optimised for detecting and analysing nano-objects such as viruses or exosomes, which have similar sizes to the liposomes used in the experiments.

The team believes that the demonstrated SEIRA optical sensor design strategy can be applied to other types of optical sensors as well. Besides sensing applications, such device structures can also be used for manipulating nanoscale objects including exosomes, viruses and quantum dots.