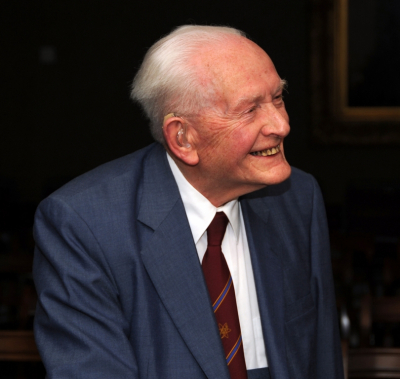 Professor John Mallard played a crucial role in the development of two of the world’s most important medical technologies: magnetic resonance imaging (MRI) and nuclear medicine imaging which includes positron emission tomography (PET). Under his leadership, a University of Aberdeen team built the first whole-body MRI scanner which Aberdeen clinicians were then able to use to carry out the world’s first body scan of a patient from Fraserburgh.

Professor Mallard, who retired from the University in 1992, was awarded the OBE in the Queen’s Birthday Honours List the same year and was awarded the Freedom of the City of Aberdeen in 2004 for his pioneering work in medical imaging. He also received honours including the Landau Memorial Plaque of the American Association of Physicists in Medicine; the Academic Enterprise Competition Prize of the British Technology Group; the Royal Society Wellcome Prize and Gold Medal; the George Van Hevesey Memorial Lecture Medal; The Royal Society Mullard award and the Royal Medal of the Royal Society of Edinburgh.

Professor David Lurie, who worked under Professor Mallard and is now leading the next generation of MRI technology at the University of Aberdeen, said: “Professor John Mallard was a pioneer, leading light and world-recognised authority in Medical Physics who led the development of novel scanning technology that is still benefitting doctors and patients today. While employed in his previous post, in London, he had performed research which indicated that magnetic resonance might be able to diagnose cancer—he published this in the journal Nature in 1964, but it went largely unnoticed. In the 1970s he led the research efforts in Aberdeen that resulted in the invention of the MRI scanning method still in use today.”