Applications of infrared spectroscopy to solve problems related to cultural heritage have been growing steadily during the last few years. People working in the field of conservation and restoration have become increasingly aware of the potential and value of using instrumental analyses; this demand involves spectroscopists and scientists developing new methodologies that can be applied to samples from museums and other related institutions.

Following from the coupling of microscopes to spectrometers, applications, including analysis of pigments, varnishes, textiles, papers, inks, polymers etc., in or on very tiny samples and in all kinds of matrices have increased dramatically. Most of the samples that require analysis are unique and valuable, and often it is impossible to remove even a very small particle from the matrix. This means that, among the instrumental analysis methods, the infrared microscope is one of the options most frequently employed for such characterisations. Two main sampling methods are used with the microscope. The first consists of removing a very small amount of sample from the matrix; normally a particle about 20 µm across is sufficient. This can then be compressed between two diamond windows in a compression cell, so as to spread the sample and produce a thin film that can be measured by transmission. The second method is used when it is not possible to remove particles from the matrix; it then becomes necessary to use internal reflection spectroscopy in which the attenuated total reflectance (ATR) objective containing the high refractive index ATR crystal is pressed against the surface of the sample. These methods, together with the other more conventional approaches, allow for the analysis of most of the samples by mid-infrared spectroscopy related to problems of conservation.

Our laboratory has received several requests from public or private institutions to solve problems related to conservation and restoration of samples from cultural heritage. A brief description of the FT-IR methodologies used to solve some of them is detailed within this article.

The Museum of Graphics Arts of Barcelona, which was interested in the conservation and restoration of its calcographic and xylographic heritage, undertook several projects related to the elimination of corrosion products and deposits of inks in plates dating from the 17th to 20th centuries. The aim of the study was based on the determination of ink composition with a view to the application of this knowledge to cleaning plates. The effect of ink together with humidity and air pollutants on the corrosion of copper calcographic plates was also of interest. The selection of the samples consisted of 11 xylographic woods and 33 calcographic copper sheets containing deposits of black ink. We were able to analyse all the samples and classify them according to their water or oil components.1

Calcographic inks showed absorptions at 2954, 2923 and 2852 cm–1 corresponding to C–H bonds and at 1740 cm–1 due to the C=O bond. All these bands are typically observed in the infrared spectra from oils. Xylographic inks, which are water-based, showed absorptions at c. 3400 cm–1 and 1640 cm–1 corresponding to the O–H stretching and deformation bands of water, respectively. Other compounds that could be identified using FT-IR spectroscopy were: Prussian Blue (Fe4[Fe(CN)6]3), calcium sulphate, calcium carbonate, hydroxyapatite (Ca5[PO4]3(OH)), silicates and nitrates. Figure 1 shows the infrared spectrum of a calcographic ink from the 20th century containing Prussian Blue, hydroxyapatite and oil. The FT-IR technique confirms that some compounds used to manufacture inks are hydroxyapatite, Prussian blue and linseed oil. 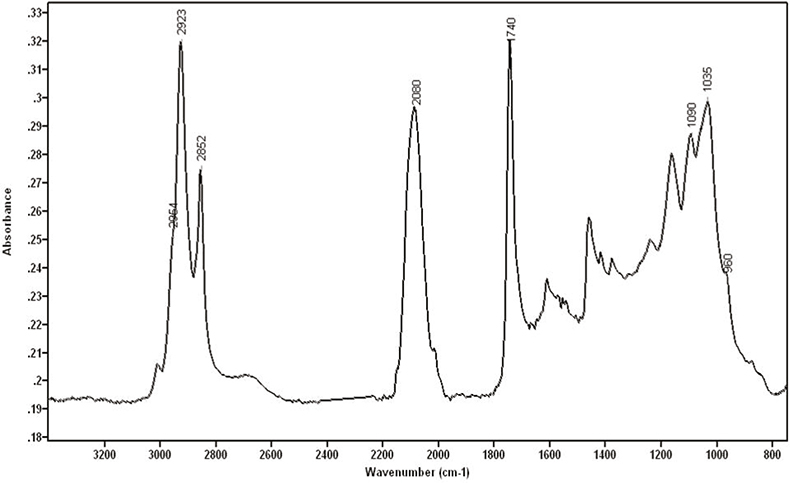 Hydroxyapatite is a substance commonly found in black pigments called Black Ivory, which are made from the ashes of calcinated animal bones. Phosphate is found in bones as hydroxyapatite. This molecule shows characteristic absorptions at 1035 cm–1, with a shoulder at 1090 cm–1, and at 960, 630, 600 and 565 cm–1, [although the last three bands cannot be seen with the microscope due to the cut-off of the mercury cadmium telluride (MCT) detector at 720 cm–1]. Prussian blue has been used widely as a pigment, either alone or as a component in pigment mixtures, because of its property of giving more intensity to black inks. It is very easy to identify Prussian blue with FT-IR due to its strong absorption around 2080 cm–1 assigned to the CN triple bond. This region of the infrared spectrum, in which triple and cumulative double bonds occur, normally shows very few bands and therefore CN can be very easily recognised. Linseed oil is widely used to combine with pigments and to provide a fluid dispersion in some inks.

The presence of silicate could be due to its use as a filler material or as a plate cleaning agent. Carbonates could be due to either contamination or their use as a filler or extender. The origin of nitrates could also be from external sources. Although these compounds may not have been present in the original inks, it is important to characterise them for cleaning purposes.

A private collector of stamps was interested in the analysis of inks’ composition in red “one-penny” stamps printed intaglio from steel plates in Great Britain. Some stamps printed before 1857 showed a blueing effect on the white paper. This effect, which was undesirable and produced a loss of value of the stamp, could appear many years after the printing. The cause of the blueing of the paper, which was unintended, was a result of the use of yellow prussiate of potash (potassium hexacyanoferrate) in the inks. The purpose of using this chemical was to make it more difficult for people to erase the cancellation of the stamp. Potassium hexacyanoferrate made the ink fugitive, so that fraudulent attempts to remove the postal cancellation could damage the appearance of the stamp. A change in the formula of red ink during 1857 stopped the blueing effect.

The purpose of the study was to characterise red inks used to print one-penny stamps in Britain during the period 1841–1880, to check the changes of the red ink over the years, and to use an objective analytical technique to discriminate samples with or without the blueing effect. A total of 76 stamps were analysed.2

During sample handling, it was difficult to separate fibres of paper and ink particles. Some samples had a significant layer of ink over the paper, which made it easier to remove them or even press the ATR crystal against them, while others showed paper fibres on the surface and therefore, a strong absorption of cellulose appeared in most of the spectra. Many attempts are normally required before obtaining a good spectrum with a low signal of cellulose.

Some representative mid-infrared absorption bands that could be observed in nearly all the stamps were those corresponding to calcium carbonate; bands at 2515, 1795, 1420 and 875 cm–1 could be clearly seen in many spectra. Strong bands at 3406, 1135 and 1114 cm–1 could be attributed to calcium sulphate dehydrate, as well as other weak bands at 1690 and 1621 cm–1. Bands at 2920 and 2851 cm–1, observed in many spectra, allowed us to identify an oil component in the ink composition. They arise from the CH2 vibration in linear aliphatic chains. Three bands at around 2080, 2060 and 2040 cm–1 could be seen in some spectra. The intensity ratio of these bands could be different. All the spectra that showed these bands corresponded to the stamps showing the blueing effect, even though the blue colour could not be appreciated by the analyst but was confirmed later by the owner of the stamps. These bands were assigned to the CN triple bond of cyano compounds.

Ferric ferrocyanide (Prussian blue) was one of the molecules originally suspected of being present in the stamps and therefore responsible for the blueing effect. However, Prussian blue has a single strong absorption at 2080 cm–1, and this does not explain the other two bands appearing in our spectra. Tetrapotassium hexacyanoferrate (II) trihydrate (K4[Fe(CN)6].3H2O also has some absorptions in the range between 2080 cm–1 and 2040 cm–1. Cyano absorptions can change depending on the kind of cyanotype. The spectrum shown in Figure 2 was recorded from the particle pictured top-right and extracted from the stamp shown on the left. Cyano and oxalate bands can clearly be seen in the spectrum. 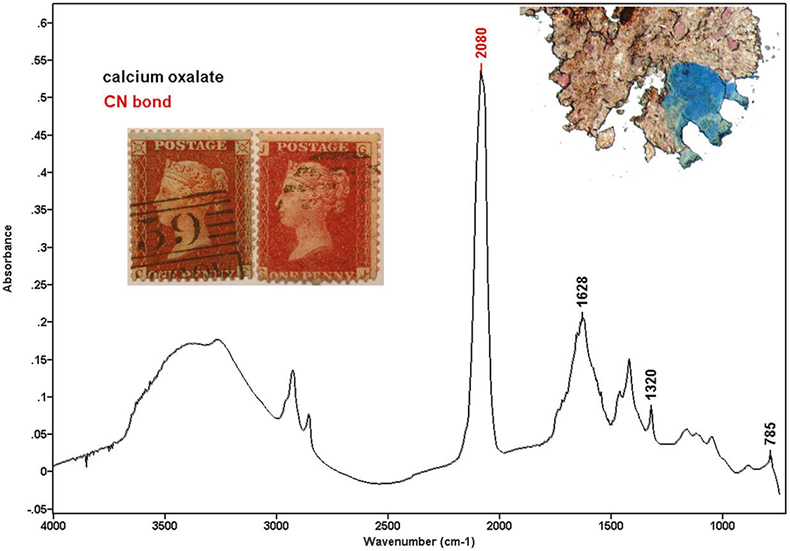 Some of the samples showed a weak absorption at 848 cm–1 with a shoulder at 834 cm–1. The shape of these bands was very characteristic and they were assigned to lead chromate, used as a red pigment in ink formulations. Lead chromate was not in the list of official formula of red inks applied to one-penny stamps. However, scanning electron microscopy (SEM) corroborated these results. All the samples that showed the chromate absorption also showed lead and chromium under SEM examination. While preparing the sample in the microscope, some strong red particles could be seen. The intensity of lead chromate peaks had a good correlation with the visual perception of the red particles. The spectrum shown in Figure 3 corresponds to the particle shown above it, which was extracted from the stamp on the right. Lead chromate and calcium carbonate bands can be identified. Other compounds identified in the ink, were calcium oxalate (1320 and 785 cm–1) and carboxylates (1580 cm–1). Elements found using SEM were: calcium, iron, potassium, sulphur, aluminium, lead, mercury and chromium. 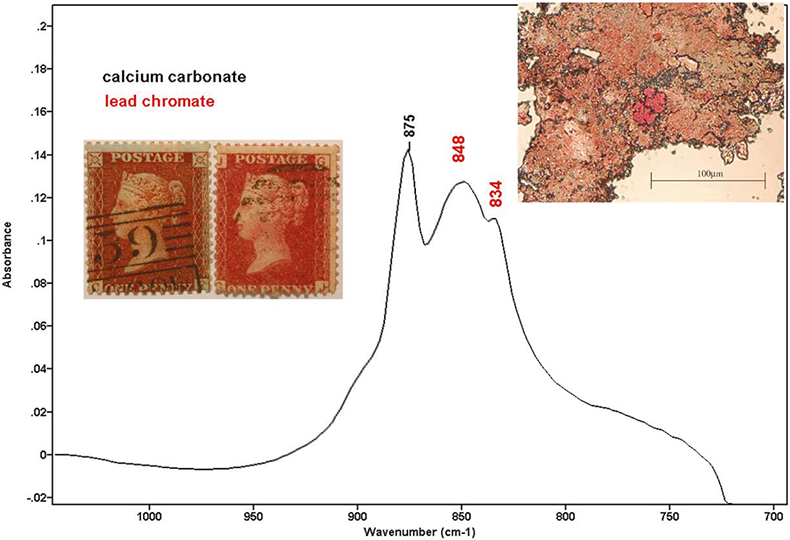 Statistical data treatment using the SPSS (Statistical Package for Social Sciences) statistical program and a matrix of 38 stamps and the results of their molecular and atomic analyses showed good correlations among CN, K and Fe. Lead chromate and chromium also appeared to be very well correlated. Ordering the samples chronologically, it was possible to follow the changes that occurred in the ink composition.

Samples manufactured between 1855 and March 1857 had cyano compounds and all the samples with the blueing effect belonged to this group. From March 1857 to April 1857 lead chromate appears in ink and coexisted with cyano compounds. From April 1857 to September 1857 samples showed both lead chromate and mercury, but no cyano. From September 1857 to 1868 we could only find the presence of mercury. Mercury has been widely used as a pigment in the form of HgS (vermillion).

FT-IR spectroscopy has been successfully applied to ink samples from printing plates and printed papers. The microscope operated in the transmission mode, the reflection mode or with other accessories, can be used to provide information about the ink content. It also provides an objective tool when the value of a sample changes according to its visual appearance.

The FT-IR method is rapid, clean and non-destructive and represents a good option for examining samples from cultural heritage.

The author thanks Ms Mercè Alonso and Mr Don Madden, who were the initiators of the investigation and suppliers of the samples. Thanks are also due to Maite Romero and Anna Vila for their collaboration in the experimental work done in the Scientific Technical Services of the University of Barcelona.