Can you smell smoke?

Full-Text PDF
Can you smell smoke?

Hafiz Abdul Azeem recently presented some interesting results from his work on atmospheric aerosols. Following their capture, he combined the optimisation of the extraction process with chromatographic separation and mass spectroscopic detection to identify various sources of pollution through their emission marker fingerprints.1 One spin-off of this work has been the use of a specific biomarker from cellulose combustion to potentially warn of low-heat smouldering in, for example, agricultural materials in bulk storage.

Atmospheric aerosols are everywhere. They are a mixture of very small particles and liquid droplets whose size means that they can be transported in the atmosphere for huge distances, changing their chemical composition as they are exposed, for example, to UV radiation and ozone during their lifetimes. You have been exposed to aerosols your whole life, and their origin (human-made or natural) affects how they interact with your body. Which molecules are observed making up such aerosols depends very much on the original source. Aerosols formed from the burning of agricultural biomass waste (or illegal slash and burn operations in rainforests!), for example, are different to those produced from motor vehicles, commercial shipping or oil-fired heating systems in buildings.

As humans, we need to be interested and aware of their presence and activity in our environment as there can be potential serious health issues. Their very small size means that they can easily gain access to our lungs. But, as a parent of twins who both had breathing difficulties at their early years, I know aerosols can be used very beneficially as a simple way to conduct very small amounts of medicines deep into the lungs of babies and small children, depositing these medicines at exactly the right locations to be most effective in re-opening the airways.2–6

Not all aerosols make it into the lower reaches of the lungs. Our whole airway from the nose all the way down to the tiny alveolar spaces is littered with our defence mechanisms against contaminated air. These serve to clean out the contaminants in what we have breathed in before this air reaches the innermost parts of our lungs. In healthy humans, who have not destroyed these defences by, for example, smoking or working in contaminated environments for long periods, there are several different defence mechanisms targeting different sizes of contaminants. Starting with your nasal hair, and progressing to the upper respiratory tracts, the larger aerosol particles, 10 µm or larger, tend to be stopped by wall collisions. Their larger mass and fast airflow speeds mean that they don’t follow the curves and bends of your airways. The heavier particles that make it past these obstacles can then be lost as gravity takes control where the airflow slows down your airway. Your defence mechanisms include traps such as small hair-like cilia, mucus and your cough reflex. Small, light aerosols can make it past your body’s defences. However, if they are too small (0.5–5 µm), Brownian motion in the low-air flow in the lower regions of the lungs may mean that they stay in the airway not colliding with the walls of the lungs, just waiting to be expelled out as you exhale. Between these two extremes, aerosols containing medicines (or unwanted polluting chemicals) can make it past your defences and into the bronchus and eventually the alveoli.

For example, phenolic compounds and sugars indicate aerosols formed from biomass burning whereas carboxylic acids and polyaromatic hydrocarbons, depending on the species identified, indicate human activity, be it motor vehicle emissions or fossil fuel use such as coal burning.

Hafiz investigated the best methods of sample preparation such as supercritical fluid extraction, liquid–liquid microextraction or hollow-fibre liquid-phase microextraction and concentrated on liquid chromatography, supercritical fluid chromatography or gas chromatography/mass spectrometry analyses (with derivatisation where necessary) for data collection and analysis leading to the identification of the individual marker substances in the aerosols. As emission marker fingerprints can be highly diverse in their chemical nature, unfortunately there is no all-in-one solution available that can be used for the detection of all of them at the same time. It requires hard-core analytical chemistry skills and access to a number of instrumental techniques for comprehensive study of various emission marker fingerprints.

It is, however, possible to suggest faster, cheaper and greener methods of analysis for certain emission markers of interest, based on their chemical nature. For example, thermal desorption hyphenated to gas chromatography/mass spectrometry can be used to study certain sugars. Handheld portable samplers are available in the market to capture aerosols on desorption tubes. These tubes can then be placed in a thermal desorption unit and analysed by online derivatisation followed by online gas chromatography/mass spectrometry analysis (Figure 1). 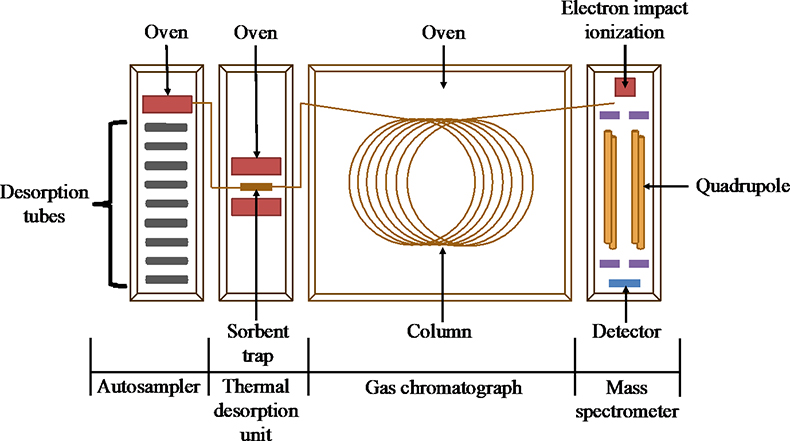 And this leads us back to a sugar called levoglucosan. This tracer compound has been seen as an ideal marker substance for biomass burning as the pyrolysate contains significant quantities of this sugar.

So here is the idea... the more we, as a society, are forced to move away from oil-based fuel sources the more we need to retain and store alternative sustainable biomass such a straw waste. The more we store for longer periods the greater the risk from catastrophic fires caused by undetected slow-temperature smouldering conditions in the stored material. These low-temperature, smouldering fires can occur spontaneously and can rapidly escalate to huge problems when the material is moved and exposed to fresh unlimited oxygen supplies during handling.

So here is a challenge… as we clearly cannot deploy tens of thousands of hyphenated sample analysis gas chromatography high-vacuum mass-spectrometer laboratory analytical systems of the scale used in this method optimisation study, we need dedicated chemical-specific sensors to monitor environments such as those described above at a very low cost to supplement the failing smoke detectors. Because we need to quite urgently “smell” smouldering low-temperature fires rather than wait for the non-existent smoke to reach the smoke detectors, by which time it’s probably too late! Madsen and Hafiz reported a proof of concept that aerosol signature, in the form of detection of levoglucosan evolved from smouldering fire, could be used for early detection of smouldering fire.8 Specialised electronic noses and sensors are required for real-time detection of smouldering.