Back to basics: removing multiplicative effects (1)

The last TD column1 showed the effect of calculating second derivatives on a set of 100 spectra, which will be the starting point for this column. In order to remind you where we had got to, the last graph is plotted again as Figure 1. You may have been surprised that it was suggested that these second derivative spectra still contain irrelevant variability. The plan was that in this column we would discuss the two most popular methods of removing what is known as “multiplicative effects”, but we realised that in order to understand why we want to remove it you need to know where it has come from.

Classical spectroscopy involves making measurements of absorptions in clear (usually liquid) media which can be computed by applications of “Beer’s Law” (properly called the Bouguer–Lambert–Beer law!). The complications of having a scattering (but non-absorbing) medium such as a turbid solution have been investigated by many scientists, but the greatest progress was made by Kubleka and Munk who showed that the pathlength in a scattering medium would be increased and that this gave rise to a multiplicative effect. This means that if the spectrum is transformed to a suitable scale then the differences caused by different scatter between (what should be) two identical samples can be corrected by multiplying the measurement at each wavelength of one of the samples by the same constant.

For those interested, a little more information will be found in the book2 and a lot more in a new book by Don and Kevin Dahm.3

If we consider a spectrum as being measured at n equally spaced wavelengths w1, w2, ..., wn , where the absorptions should be x1, x2, ..., xn , but these become modified by adding an off-set and slope by the equation

so that the measured absorptions become y1, y2, ..., yn then we can remove these additions by calculating the second derivative. The second derivative of the yi spectrum is identical to the one we would have obtained from the xi spectrum. However, when we measure spectra in a scattering medium, such as in diffuse reflection spectroscopy, then the multiplicative effect will occur. In terms of the previous notation, the xi spectrum is modified according to,

Although many spectroscopists believe that taking second derivatives removes multiplicative effects, this is not the case as will be demonstrated by use of some computed spectra.

Figure 1. The first original spectrum (upper blue line) and the second derivatives of a set of 100 spectra. See Reference 1 for details.

What we hope to obtain are modified spectra which are identical to the original spectrum (after it has undergone the same pre-treatment). In the graphs that follow the “a” Figure shows all the successfully pre-treated spectra, which appear as a single spectrum while the “b” Figure shows all 13 spectra after the particular treatment.

Figure 3. (a and b) Results of applying first derivative pre-treatment.

Figure 4. (a and b) Results of applying second derivative pre-treatment.

Figure 5. (a and b) Results of applying SNV pre-treatment. 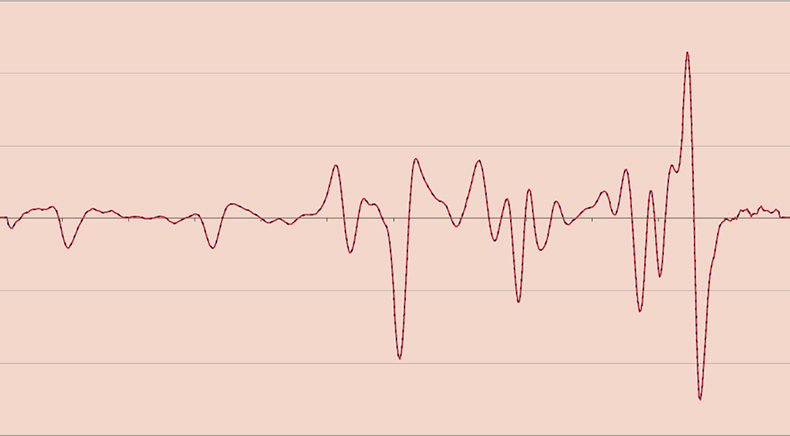 In the next column we will explain how SNV and the other popular pre-treatment for removing multiplicative effects, multiplicative scatter correction (MSC),5 work and (if we have space) to see if this will give us an improved result for the problem described last year.6