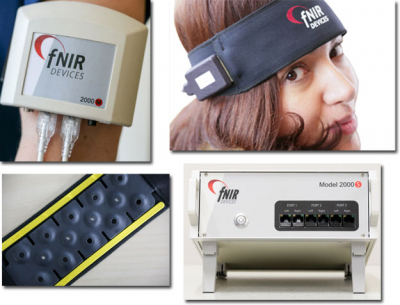 BIOPAC Systems, the global distributor for fNIR Devices, has announced the latest generation of their functional near infrared (fNIR) optical imaging systems. The new high-density imaging systems provide in-lab or real-world cognitive function assessments for physiology researchers looking to understand brain activity without fMRI. The extra-lightweight sensor fits comfortably on the forehead where it monitors relative changes in oxy or deoxy haemoglobin as a proxy for the brain activity in the pre-frontal cortex.

The new fNIR systems are available in three versions. The fNIR 2000C is a stationary unit that collects data from up to 18 optodes. The fNIR 2000M is a wireless and mobile imager that collects data from up to 18 optodes and can be used while subjects are performing tasks in the lab or in the real world. The fNIR 2000S is a 54-optode capable imager with advanced features for recording up to three subjects simultaneously. A new through-the-hair sensor will allow researchers to assess other areas of the brain such as motor and visual cortices. Adding in different parts of the brain increases understanding of brain activity without the complications of fMRI.

All systems include fNIRSoft and COBI software for data collection and analysis. Data can be synchronised with and imported into AcqKnowledge Software to understand the physiological response, including EEG, EDA, ECG, BP and other important physiology signals.