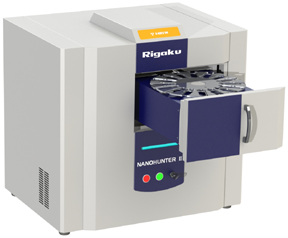 Due to increasingly stringent environmental regulations, there is rising demand for a simpler method of conducting analyses down to the ppb level with regard to, for example, arsenic (As), selenium (Se) and cadmium (Cd) contained in factory waste liquids and effluent streams. Using the NANOHUNTER II spectrometer, analysis down to the ppb level becomes possible, even with a very small sample size, merely by adding a drop of liquid to the sample carrier, drying it and then performing the measurement. Quantitative analyses using internal standard substances can also be easily performed.

The NANOHUNTER II combines a fully automatic optical axis adjustment system that provides stable high-sensitivity analysis in an easily handled benchtop form factor that allows quick and trouble-free operation. With a high-power 600-W X-ray source, a newly developed mirror (optic) and a large-area silicon drift detector (SDD), the NANOHUNTER II spectrometer enables high-intensity, high-sensitivity measurements. The lower limit of Cd detection is 2 ppb. For As and Se in a liquid, a detection lower limit of 0.8 ppb or less has been achieved.

One important advantage is the high efficiency with which Kα lines can be excited. Until now, exciting Kα lines in 48Cd has been very challenging, so practitioners relied on analysis using L-lines, which are difficult to measure. The newly developed optic employed in this device can be used with a high-power excitation source of about 30 keV, which makes it possible to measure Kα lines with high signal-to-noise ratios and clearly defined peaks (when measuring Cd). Wide adoption of this capability is expected in fields such as the screening and analysis of factory waste liquids and the analysis of beverages, as such as wine.

In the area of analysis of solid surfaces, there is demand (primarily in the fields of thin films and thick films) for analyses that penetrate slightly deeper than the surface. For these kinds of analyses, a methodology called grazing incidence X-ray fluorescence (GI-XRF) is employed whereby the elements beneath the surface are excited by varying the incident angle of the X-ray source. Because the NANOHUNTER II spectrometer has the necessary functionality to vary the angle of incidence, it is possible to perform depth profile surface analyses. The GI-XRF technique is applicable to nanoscale research.