Xenon-NMR can be used with fragile materials 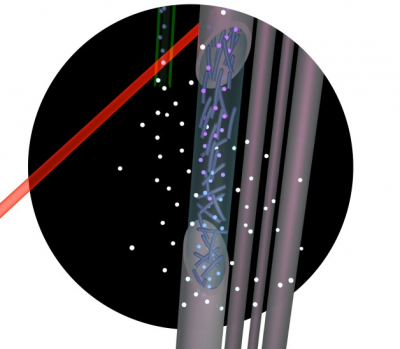 Scientists at the Department of Energy’s Lawrence Berkeley National Laboratory (Berkeley Lab) have developed a device that enables nuclear magnetic resonance (NMR) spectroscopy, coupled with a powerful molecular sensor, to analyse molecular interactions in viscous solutions and fragile materials such as liquid crystals. For the first time, their method allows the sensor, hyperpolarised xenon gas, to be dissolved into minute samples of substances without disrupting their molecular order. The technique brings the analytical power of hyperpolarised-gas NMR to materials that are too fragile to accept xenon gas through bubbling or shaking, which are the conventional delivery methods. It could help scientists learn more about advanced polymers, filters and catalysts for industrial processes, and liquid-crystal displays, to name a few applications.

The work was published in Angewandte Chemie.

“Our device provides a new, robust way of introducing hyperpolarised xenon gas into a sample without perturbing the order of its molecules”, says Pines. “It will allow us to use NMR to study new types of viscous and fragile materials, as well as materials that hierarchically aggregate into more complex structures, such as synthetic membranes and biological cells.”

NMR spectroscopy uses superconducting magnets to polarise the alignment of the nuclear spins in a sample. When a radio frequency pulse is applied, the spins of the nuclei flip and then relax back to alignment, which produces a characteristic frequency of their own. The frequency is converted by NMR detectors into a spectral readout of the type, distribution, and reaction state of the molecules in the material. Often, however, only a small percentage of the nuclear spins in a sample are polarised, which significantly limits NMR’s sensitivity. One way to boost the strength and sensitivity of NMR signals is to hyperpolarise the nuclear spins, meaning the nuclei are polarised far beyond their thermal equilibrium conditions. The isotope 129Xe is relatively easy to hyperpolarise and gives a large NMR signal in response to small changes in its surroundings. It’s bubbled into a material that scientists want to analyse with NMR, and the spin of the xenon nuclei reports back what is inside.

However, hyperpolarised xenon gas has one big limitation: when it is bubbled into a viscous solution or molecularly aligned material, the bubbles disrupt the sample, sometimes to the point of destroying it. Berkeley Lab scientists have now overcome this limitation. Their method dissolves hyperpolarised xenon gas into fragile samples without wreaking havoc on their molecular order. A sample to be studied is placed inside hollow silicone membrane fibres. Xenon gas is diffused through the columns, and only the xenon inside the columns is analysed. The NMR signal is acquired, and the xenon gas diffuses out of the columns, to be replaced by new gas.

From left, Chris Vassiliou, Ashley Truxal and Clancy Slack with an NMR magnet in Alex Pines’ UC Berkeley lab. They built a device that allows a new class of materials to be analysed by NMR. Credit: Berkeley Lab

“Our system essentially breathes xenon in and out of the columns, so the signal source is constantly replenishing”, says Truxal. “In addition to being non-disruptive to the sample, the approach requires a very small amount of sample, so the NMR analysis is very efficient.”

The scientists have demonstrated their non-disruptive approach on two materials that cannot be probed by hyperpolarised xenon gas using conventional techniques. In one example, they used the device to track phase changes in MBBA, an organic liquid crystal.

“Understanding precisely when and why a liquid crystal undergoes a phase change can help us take advantage of the properties, perhaps leading to better electronic displays for example”, says Truxal.

The scientists also used the device to analyse a bacteriophage with liquid crystalline properties, indicating the technique can be applied to a wide range of biological materials.