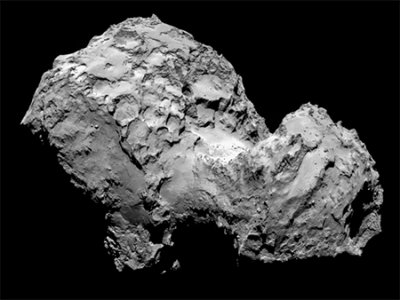 We have all been amazed by ESA’s Rosetta mission and the landing of the Philae module on Comet 67P/Churyumov-Gerasimenko (known as Churi). A set of eight articles published in Science on the in situ findings contain a wealth of completely new information, and reveal several differences in comparison with previous observations of comets and current models.

The landing of the Philae module provided the cometary rendezvous mission Rosetta with an exceptional opportunity: that of studying in situ a cometary nucleus (from its surface to its internal structure). This is likely to shed light on these small celestial bodies that date back to the origins of the Solar System. The data collected by the lander’s ten instruments on 12–14 November 2014 (during the 63 hours that followed Philae's separation from Rosetta) added to the observations carried out by the Rosetta orbiter, while its bouncing touchdown on the comet was actually a source of extra information.

Twenty-five minutes after Philae’s initial contact with the cometary nucleus, COSAC (Cometary Sampling and Composition experiment)—a gas chromatograph-mass spectrometer—carried out a first chemical analysis in sniffing mode: examining particles that passively enter the instrument. These particles probably came from the cloud of dust raised by Philae’s first contact with the ground. Sixteen compounds were identified, divided into six classes of organic molecules (alcohols, carbonyls, amines, nitriles, amides and isocyanates). Of these, four were detected for the first time on a comet (methyl isocyanate, acetone, propionaldehyde and acetamide). 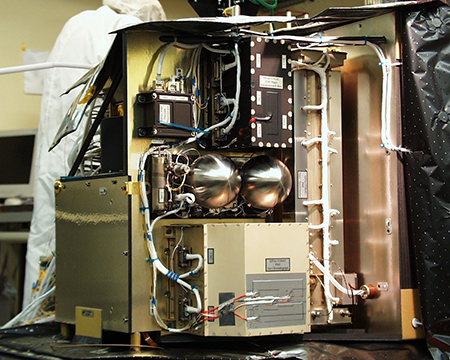 These particles are precursors of molecules important for life (sugars, amino acids, DNA bases etc.). However, the possible presence of these more complex compounds was not unambiguously confirmed in this first analysis. In addition, almost all the compounds detected are potential precursors, products, combinations or by-products of each other, which provides a glimpse of the chemical processes at work in a cometary nucleus, and even in the collapsing solar nebula in the very early Solar System.

The cameras of the CIVA experiment (Comet Infrared and Visible Analyser) reveal that the terrain in the vicinity of Philae's final landing site is dominated by dark clumps that are probably large grains made up of organic compounds. Since cometary material has hardly been altered since its origins, this means that, early in the Solar System's history, organic compounds had already clumped together in the form of grains, and not just as small molecules trapped in the ice as was previously thought. The introduction of such grains into planetary oceans could have led to the emergence of life. 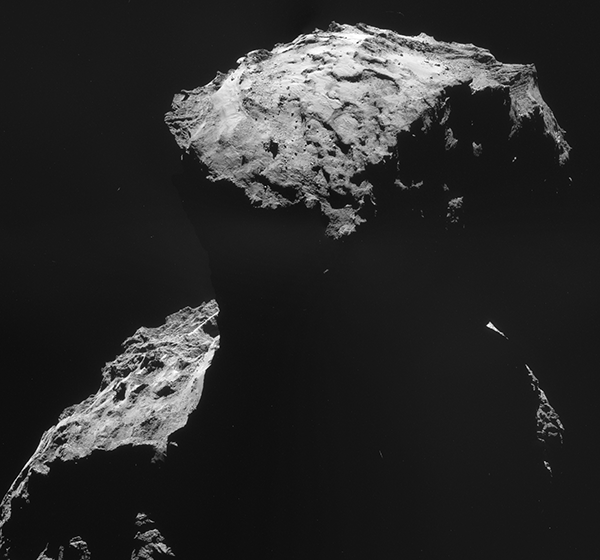 COSAC identified a large number of nitrogen compounds but no sulfur compounds, contrary to what the ROSINA instrument on board Rosetta had observed. This suggests that the chemical composition varies depending on the area sampled.

In addition, it was possible to infer the mechanical properties of the surface from Philae’s bouncing touchdown. The lander first touched down on the surface at a site dubbed Agilkia, and then bounced several times before reaching Abydos, the final landing site. Philae’s trajectory and the data recorded by its instruments show that Agilkia is made up of granular materials at least 20 cm deep, whereas Abydos has a hard surface.

On the other hand, the comet's interior appears to be more homogeneous than predicted by models. The radar experiment CONSERT (Comet Nucleus Sounding Experiment by Radio wave Transmission) provides, for the first time, an opportunity to investigate the internal structure of a cometary nucleus. The propagation time and amplitude of the signals that travelled through the upper part of the “head” (the smaller of Churi’s two lobes) show that this part of the nucleus is broadly homogeneous on a scale of tens of metres. The data also confirms that porosity is high (75–85%) and shows that the electrical properties of the dust are comparable to those of carbonaceous chondrites.

The CIVA-P (P for panorama) experiment, made up of seven microcameras, took a panoramic (360°) image of Philae’s final landing site. It shows that fractures already observed on large scales by Rosetta are also present right down to millimetre scales. The fractures are caused by thermal stress, due to the large temperature differences on the comet as it travels around the Sun.

Information about Philae’s location and orientation

The panoramic image, in which a foot or an antenna can be seen in places, also revealed Philae’s position. It rests in a hole about its own size, lying on its side (with only two feet out of three in contact with the ground), and surrounded by cliff walls that hinder its solar energy intake and its communications with Rosetta.

With three periods of observation in conditions of direct visibility between the Rosetta orbiter and Philae, the CONSERT instrument was able to determine the area (150 m × 15 m) where Philae is located. This made it easier to reconstruct the module’s trajectory from the first touchdown site, Agilkia, to the final landing site, Abydos. Then, by using the signals that travelled through the comet’s interior, CONSERT reduced the uncertainty surrounding Philae’s location (on the edge of the region named Hatmehit) to a strip measuring 21 m × 34 m.

Together with the other four articles published (which concern, for instance, Churi’s magnetic and thermal properties), these first measurements taken on a comet’s surface improve existing understanding of these small Solar System bodies.