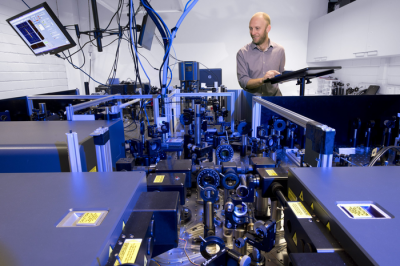 A rare spectroscopy technique performed at Swinburne University of Technology, Australia, directly quantifies the energy required to bind two excitons together, providing for the first time a direct measurement of the biexciton binding energy in WS2. As well as improving our fundamental understanding of biexciton dynamics and characteristic energy scales, these findings directly inform those working to realise biexciton-based devices such as more compact lasers and chemical-sensors. The study also brings closer exotic new quantum materials, and quantum phases, with novel properties.

Particles of opposite charge in close proximity will feel the “pull” of electrostatic forces, binding them together. The electrons of two hydrogen atoms are pulled in by opposing protons to form H2, for example, while other compositions of such electrostatic (Coulomb-mediated) attraction can result in more exotic molecular states.

The optical properties of semiconductors are frequently dominated by the behaviour of “excitons”. These compound quasi-particles can be created via the excitation of an electron from the valence to the conduction band, with the negatively-charged conduction electron then electrostatically binding to the positively-charged vacancy (known as a hole) its excitation left in the valence band.

Understanding the interactions between excitons is crucial for realising many of the proposed device applications, and in bulk materials they are quite well understood. However, when things are reduced to two dimensions, the ways they can interact change, and important quantum effect can come into play. Monolayer semiconductors such as WS2 are introducing a materials revolution due to the novel properties uncovered by research like this.

Due to the reduced dimensionality of two-dimensional materials, the binding energy of excitons and exciton complexes like biexcitons are greatly enhanced. This increased binding energy makes the biexcitons more accessible, even at room temperature, and introduces the possibility of using biexcitons flowing in novel materials as the basis for a range of low-energy future technologies. Atomically-thin transition metal dichalcogenides (TMDCs) like WS2 are a family of semiconducting, insulating and semi-metallic materials that have gained a significant amount of attention from researchers in recent years for use in a future generation of “beyond CMOS” electronics.

“Before we can apply these two-dimensional materials to the next generation of low-energy electronic devices, we need to quantify the fundamental properties that drive their functionality”, says Mitchell Conway, a PhD student from Swinburne University of Technology.

The need to understand the properties of biexcitons has driven significant conjecture and investigation in the semiconductor research community of their presence, binding energy and nature. Attempts have been made to investigate how much energy is required to separate the two excitons in a biexciton, the obvious way being a comparison between the energy of the bound and unbound excitons. Yet, this is not what is typically done.

The Swinburne-led study has identified the optically-accessible biexciton in the atomically-thin TMDC tungsten disulphide (WS2). To unambiguously measure biexcitonic signatures, the team of researchers employed a specific sequence of ultrashort optical pulses with a precisely controlled phase relation and well-defined wave-vectors.

“By using multiple pulses with a high degree of precision we can selectively and directly probe the doubly excited biexciton state, while eliminating any contributions from singly excited exciton states. This ability to directly excite the biexciton is inaccessible to more common techniques such as photoluminescence spectroscopy,” says Professor Jeff Davis from Swinburne.

The technique the team used is known as “two-quantum multidimensional coherent spectroscopy” (2Q-MDCS), which enables a direct experimental measurement of the biexciton binding energy. When the biexciton is observed using 2Q-MDCS, a signal from an exciton pair that is interacting but unbound is also generated, referred to as “correlated excitons”.

“The energy difference between the biexciton peak and the correlated two-exciton peak is the best means to measure biexciton binding energy”, Mitchell explains. “This was an exciting observation, since other spectroscopic techniques don’t observe these correlated excitons.” 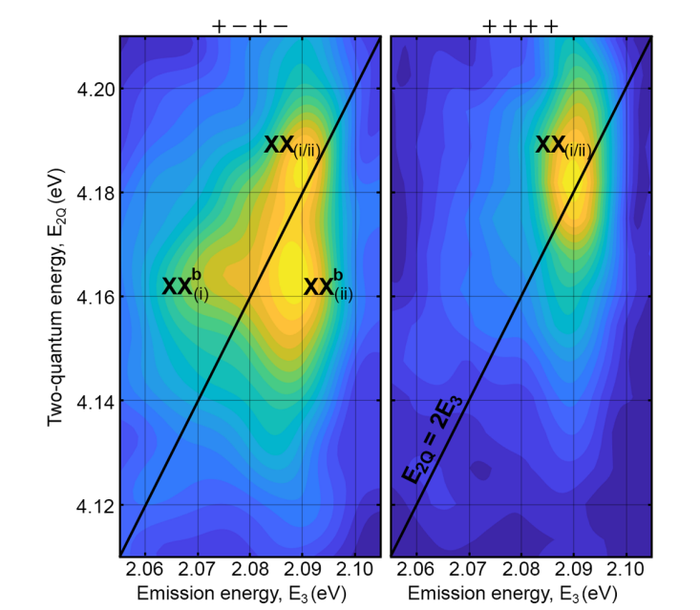 Techniques previously used to identify the biexciton are limited to measuring photons from the biexciton to exciton transition. These transitions may not reflect the precise energy of either relative to the ground state. In addition, the study identified the nature of the biexciton in monolayer WS2. The biexciton they observed was composed of two bright excitons with opposite spin, which in WS2 is referred to as a “bright-bright intervalley” biexciton. In contrast, photoluminescence measurements reporting biexcitons in monolayer WS2 are unable to identify the specific excitons involved, but are typically assumed to involve bright exciton and one “dark” exciton, due to the rapid relaxation into these lower energy exciton states that don’t absorb or emit light.

The ability to accurately identify biexciton signatures in monolayer semiconductors may also play a key role in the development of quantum materials and quantum simulators. Higher-order electrostatic correlations provide a platform to construct coherent combinations of quantum states and potentially tune the interactions in order to realise quantum phases of matter that are still not well understood.