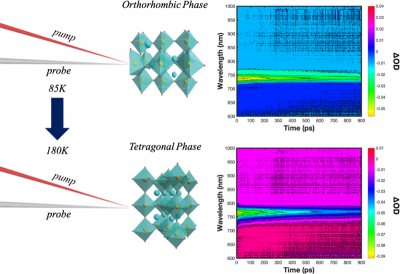 New research provides an overview of how the charge carrier dynamics vary with respect to the crystalline phase of the organic–inorganic perovskite. Despite organic–inorganic lead halide perovskites having attracted enormous scientific attention for energy conversion applications over recent years, the influence of temperature and the type of the employed hole transport layer (HTL) on the charge carrier dynamics and recombination processes in perovskite photovoltaic devices is still largely unexplored. In particular, significant knowledge is missing on how these crucial parameters for radiative and non-radiative recombinations, as well as for efficient charge extraction vary among different perovskite crystalline phases that are induced by temperature variation.

The research presents micro photoluminescence (μPL) and ultrafast time-resolved transient absorption spectroscopy (TAS) results in a reference glass/perovskite architecture and two different glass/ITO/HTL/perovskite configurations at temperatures below room temperature. The objective of this work is to probe and shed light on the charge carrier dynamics of different perovskite crystalline phases, while considering also the effect of the employed hole transport layer (HTL) polymer. Namely, CH3NH3PbI3 films were deposited on Glass, PEDOT:PSS and PTAA polymers, and the developed glass/CH3NH3PbI3 and glass/ITO/HTL/CH3NH3PbI3 architectures were studied from 85 K up to 215 K in order to explore the charge extraction dynamics of the CH3NH3PbI3 orthorhombic and tetragonal crystalline phases. Interestingly enough, the article reports evidence that the charge carrier dynamics at low temperatures, are not only affected by the employed hole transport layer, but in addition are strongly correlated to the different perovskite crystal phases.

In particular, μPL spectroscopy reveals an unusual blueshift of the bandgap with temperature, which is discord of the Varshni behaviour of the typical semiconductor, below 120 K for the orthorhombic phase of the perovskite and the dual emission at temperature below of 100 K. Moreover, in the three studied temperatures by means of TAS, at 85 K (orthorhombic phase), at 120 K (coexistence of the orthorhombic and the tetragonal phase) for each peak, and at 180 K (tetragonal phase) the glass/ITO/PTAA/CH3NH3PbI3 architecture exhibits faster hole injection from the perovksite layer to the HTL and slower recombination rates (k2) when compared with the glass/ITO/PEDOT:PSS/CH3NH3PbI3 configuration. It is discussed within the article that this is due to the better crystalline quality of the perovskite film when it is grown on the PTAA polymer. Furthermore, as the temperature increases for each perovskite crystal phase (orthorhombic and tetragonal), the τ2 time components and k2 bimolecular recombination rate decrease, for both configurations. Thus, it was found that the charge carrier dynamics at low temperatures, are not only affected by the employed hole transport layer, as we have already shown for the room temperature measurements but are strongly correlated to the different perovskite crystal phases.

Based on the above, it is believed that the new insights of this article pave the way towards the design of more efficient and stable PSCs, particularly for low temperature applications, such as the use of PSCs in satellites or in space stations. More importantly, this work demonstrates the validity of TAS as a figure of merit technique on shedding light on the physical origins and mechanisms within and from the perovskite active layers, that are the key component of PSC devices.