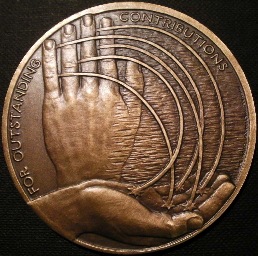 The Australian and New Zealand Society for Mass Spectrometry (ANZSMS)’s highest award is the ANZSMS Medal. It has only been awarded twice before (Jim Morrison, 2009 and John Bowie, 2011) and recognises “outstanding contributions to knowledge in the biological, chemical, engineering, mathematical, medical or physical sciences relating directly to the exploitation, application or development of mass spectrometry”. The Medal was presented to Peter at the joint 25th Conference of the ANZSMS and the 6th Conference of the Asia and Oceania Society for Mass Spectrometry Conference held in Brisbane, Queensland, Australia between 19 and 22 July 2015.

Noel Davies, of the University of Tasmania, gave the introduction to Peter’s plenary award lecture; a summary of which he kindly provided and appears below.

“The Australian and New Zealand Society for Mass Spectrometry (ANZSMS) is delighted to award the ANZSMS medal to Professor Peter Derrick from the University of Auckland. The background to this medal is that it has only been awarded twice before to two of Australia’s most outstanding mass spectrometrists, the late Professor Jim Morrison in 2009 and Professor John Bowie in 2011. The Society’s other two medals are named after these leading Australian scientists: the Bowie medal for young scientists and the Morrison medal for more established researchers, the latter of which Peter was also awarded in 2009. Unlike those two medals which are awarded by the Society’s Executive Committee, the ANZSMS medal is awarded only after peer review by a committee including distinguished international scientists. (For more information see http://www.anzsms.org/Awards/ANZSMSMedal.php)”

“Peter has been an outstanding international leader in mass spectrometry for around 40 years, with his first publication in mass spectrometry appearing in the late 1960s. In an era when double-focussing magnetic sector instruments were the top research grade instruments, his achievements in the design and construction of his grand scale sector instrument in the late 1970s in Australia were legendary within the Australian and New Zealand MS community, and he followed this by being appointed as the youngest ever full professor at the University of NSW in 1980. He has now spent a very significant proportion of his career (~20 years) in both Australia and New Zealand. His current research interests are very broad and include FT-ICR, proteomics and TOF/TOF.”