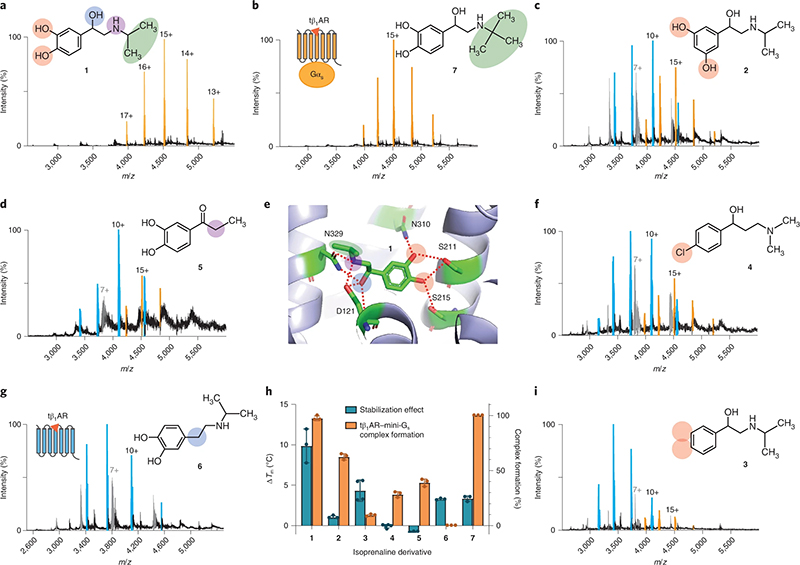 In a new publication, the authors demonstrate how native MS can be used to investigate the pharmacology of GPCRs using the beta-1 adrenergic receptor (β1AR) as a model system. Being able to combine the sensitivity and near atomic mass resolution of the mass spectrometer, whilst preserving the receptor-G protein interactions, allowed the authors to monitor, with high sensitivity, the full spectrum of receptor pharmacology in vitro. Due to mass differences between different G proteins, the authors were also able to distinguish if a ligand is able to promote biased signalling towards a specific pathway.

The authors also discovered an endogenous zinc molecule associated with the receptor. This cation was shown to be a positive allosteric modulator of β1AR and demonstrates the potential for native MS to uncover novel insights that may be important for drug discovery. As an example, the regulation of zinc binding or mimicking its mechanism with a small molecule may provide a new avenue for modulating the kinetics or signalling of β1AR for therapeutic purposes.

These examples highlight two key benefits of utilising native MS within drug discovery, namely: reconnecting the two fundamental drivers of pharmacology, binding and function; and interrogation of a native ecosystem with high precision.

Professor Dame Carol Robinson, co-founder of OMass Therapeutics and Chair of the Scientific Advisory Board said: “Our findings demonstrate that native MS can be used to reconnect the two fundamental drivers of pharmacology, binding and function. From a practical viewpoint, GPCRs had represented a major challenge for native MS. Overcoming these difficulties has allowed us to monitor attenuated G-protein coupling, driven by a wide range of ligands, highlighting the sensitivity and robustness of our approach. I am also delighted that despite the fact that β1AR is a well-studied receptor, we were able to find a previously unknown endogenous zinc molecule associated with the receptor, which could have implications for the design of new allosteric modulators.”