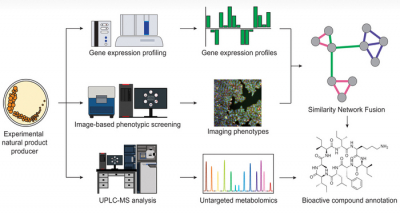 Many successful drugs have their origins in natural sources such as plants, fungi and bacteria, but screening natural products to identify potential drugs remains a difficult undertaking. A new approach using molecular biology, analytical chemistry and bioinformatics to integrate information from different screening platforms addresses some of the biggest challenges in natural products drug discovery, according to a recent study.

A major challenge has been determining the mechanism of action and biological target of a novel bioactive compound. Another central challenge is identifying the molecule or molecules driving biological activity in a complex mixture from nature.

“These two big concepts have been at the heart of our collaborative programme, and this paper brings those two questions together in a fully integrated approach”, said John MacMillan, professor of chemistry and biochemistry at UC Santa Cruz.

By integrating the results of two completely different screening platforms and combining this with next-generation metabolomics analysis of their natural products libraries, the researchers created a powerful framework for natural product biological characterisation. Using this approach to screen a small collection of randomly selected microbial natural product fractions, they were able to identify a known compound (trichostatin A) and confirm its mechanism of action; link a known compound (surugamide) with novel biological activity (cyclin-dependent kinase inhibition); and discover new compounds (parkamycins A and B) with complex biological activity.

“If we see similar effects to one of those known compounds, that suggests a similar mechanism of action. We have used this technology effectively to understand the biological activity of a number of unique small molecules”, MacMillan said.

The other platform, a cytological profiling (CP) technology developed by Lokey’s lab, involves high-content image analysis of cells exposed to the samples being screened and then stained with a panel of fluorescent probes to highlight key cytological features. Automated fluorescence microscopy images yield a total of 251 unique cytological features for each sample.

The researchers used the CP and FUSION technologies to screen complex natural products libraries developed by MacMillan’s and Linington’s labs. These libraries were derived from marine bacteria isolated by the two labs. To search for bioactive natural products, the researchers grow the bacterial strains in the lab, make a crude extract of all the compounds produced by each strain, then use chromatography to separate each extract into a series of fractions, each containing two to 20 compounds.

Mass spectrometry methods are widely used for the large-scale study of small molecules (“metabolomics”) and can help identify the chemical constituents of each fraction. An approach called Compound Activity Mapping developed by Linington and others combines mass spectrometry-based metabolomics with biological screening data to identify which compounds in a mixture are driving a particular biological signature. In the new study, the researchers developed a sample processing workflow using mass spectrometry and a modified version of their Compound Activity Mapping platform that incorporates the integrated results of their screening technologies obtained with Similarity Network Fusion.

“The question is, can we use all that to pull out the chemicals that are driving a particular signature and make more robust predictions of the mechanism of action? Our approach allowed us to accomplish that in a pretty substantial way”, MacMillan said.